This abbreviated version of Empire was produced and edited by the Museum of Modern Art, New York, and has a running time of forty-six minutes. The original version—arranged by Harry Romney, co-directed by John Palmer and Andy Warhol—was shot by Jonas Mekas from the 44th floor of the Time-Life Building with a 16mm Auricon camera on June 25, 1964, and had a running time of eight hours. Along with other of Warhol’s early and now infamous films (Eat, Sleep, Haircut), Empire is an example of the inordinate levels of concentration and self-consciousness that Warhol applied to his cinema subjects.

If repetition was a fundamental trait of his paintings and silkscreens, extreme repetition was a fundamental trait of his films, a trait which both exaggerated and nullified the medium’s inherent concepts of repetition, motion, and light—what makes a moving picture “move.” And Empire is completely motionless, save for an occasional shift of ambient light. Warhol’s childlike fascination with film was best communicated in a 1967 interview with the L.A. Free Press, when he said: “But it’s so easy to make movies, you can just shoot and every picture comes out right.”

The film will also be shown at 5:20 pm and 6:30 pm during the opening reception. 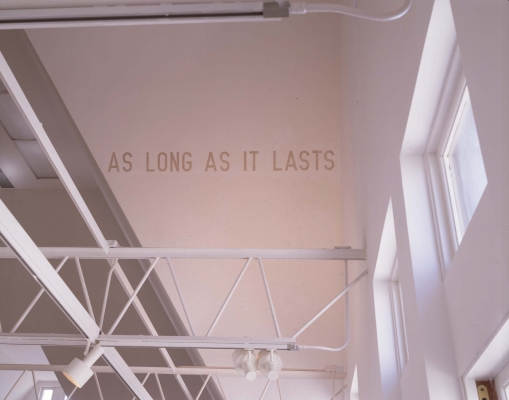