A Monument of Energies, Human and Inhuman

Europe’s colonization of the American continents has been a predominant theme in Baumgarten’s work throughout his career. Central to this issue is the process of naming: the shifts in power and identity that occur when one culture “discovers” another and begins to colonize its people, animals and geography through the application of proper names. In Baumgarten’s work, naming becomes a fundamental example and metaphor for the more insidious assimilation of indigenous cultures that happens in the process of missionary work, mining, agriculture, commerce, and tourism.

First we must consider the language barrier; from the initial encounters between American Indians and Europeans a vocabulary developed that is specific to speaking about Indians, especially in the English language…. People ask, “Which do you prefer, ‘Indian’ or ‘Native American’?” Neither is acceptable, nor is any version of the word ‘Cherokee.’ Which would you rather be called, Wasicu,’ European,’ or ‘Limey’?… The Cherokee word for Cherokee is Ani Yunh wiya. If translated literally it might mean ‘The People,’ as so many other Indian nations call themselves. None of the words you call us by are words by which we call ourselves. Consider the import of such a phenomenon upon your knowledge of what you call your country.
—Jimmie Durham, artist and descendant of the Cherokee nation, 1987

In the late 1980s Lothar Baumgarten travelled throughout the United States documenting the impact of the railroad industry on the land and autochthonous (indigenous) peoples, plants, and animals of North America, a commitment whose time and intensity rivaled the artist’s eighteen month residency with the Yanomami society of Venezuela in the late 1970s. Beginning on the east coast of the United States, Baumgarten worked his way west through Pennsylvania to Chicago, and from there westward through Missouri, Montana, Texas and Arizona to Seattle, the west coast, and back again. In the course of his travels he took over 4,000 photographs of all subject matter related to the railroad: bridges, trestles, road crossings, steel plants where train parts are manufactured, wild horses, and track-side settlements.

The dominant theme of this eloquent visual chronicle is the relationship between the railroads and the terrains which they negotiate - the deserts, mountains, rivers, and canyons - and the feats of engineering necessary in order to “settle” the West. It’s subtext, however, is the effect of Manifest Destiny on America’s native inhabitants. Beneath and surrounding the railroad’s lifeless steel rails are the remains of the people and natural resources the rails traversed. There is a form of cultural violence and erasure inherent to our sublime contemplation of Baumgarten’s beautiful, black and white views.

As Baumgarten wrote in Carbon, a catalogue designed by the artist and published by the Museum of Contemporary Art, Los Angeles, and Pennti Kouri, New York, in 1991: “The subject and raw material of Carbon is the aroma of geography, as embodied in the names of the railroad lines covering this country. These names… reflect the movement of territorial expansion, the natural destination of which was the Pacific Ocean; on the other hand, they testify to an older stratum, that of the native societies, their rivers and mountains, fords and trails.”

The United States has the largest rail network of any nation on earth. It is fitting, then, that Baumgarten’s images be exhibited in Chicago, the epicenter of the railroad industry and a city whose name is derived from “Shicagou,” the Potawatomi Indian word for the wild onions that grew along the banks of the Chicago River. The place where the Chicago River flowed into Lake Michigan was a favorite hunting and food-gathering ground for the Potawatomis - as well as a strategic location for a trading post in the eighteenth century - during the era of water travel and exploration in the Midwest. In the nineteenth century the locomotive and the railroad industry played a unique technological role not only in the construction of the United States as a nation but also in the growth and prominence of Chicago as a city. Chicago’s manufacturing, transportation, and raw material identity was profoundly linked to the railroads throughout much of this century. At the same time, the city’s name is all that remains of the area’s former natural and human inhabitants.

For his installation at The Renaissance Society, Baumgarten will exhibit approximately forty new photographs from his inventory of negatives, some of them specifically related to Chicago. Incorporated beneath and around these framed images will be eight wall paintings of railroad company names, logotypes and switching signals (such as Burlington Northern or Illinois Gulf Central); and the names of Native American animals and peoples (such as whippoorwill, armadillo, Cheyenne, Apache). 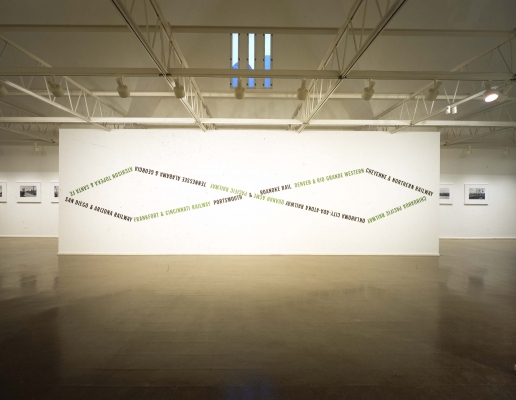