I Am Not Indifferent

In recent years Robin Winters has concentrated on making portraits in a wide array of media including drawing, painting, ceramic, bronze, and blown glass. Several hundred of these heads will comprise most of his exhibition at The Society: arranged in rings on the floor, elevated on pedestals, pinned to the walls, and lined up on bleachers and shelves. The portraits are loosely based on Winters’s friends, himself, mythical or literary characters and art history; many are adorned with hats or have strange protrusions coming out of them like antlers or thoughts, giving each a distinct attitude of whimsy, contemplation, mischief, or sadness. The character of each head is so profound as to seem strangely familiar, not because we recognize its face but because we recognize something more basic about it, something intuitive, soulful, spiritual.

Winters once remarked that the portraits and busts were his self-made “audience,” or, by extension, works of art which “view” each other and the people who view them. As a realization of this interactive fantasy Winters himself will be in residence at The Society for the first three weeks of his exhibition, greeting visitors, holding informal discussions with them, and making new portraits with them (and perhaps of them). Part of the gallery will be parceled off and furnished with worktables, art materials, and an ample reference library, all of which will function as an ongoing studio for the artist and whomever visits the exhibition.

All of Winters’s work engages us through its magic and charm more than through its representational accuracy or virtuosity. In this sense his work has more in common with Paul Klee, Alice Neel, or Pre-Columbian sculpture than with most “informed” contemporary art. Winters’s work is intelligent, but not didactic; elegant, but not decorative; and celebratory rather than critical. In a word, it “lives” (and lets live), which may explain why his most recent glass heads are titled Vitro Vivo: live glass.

Throughout his career Winters has worked in an extremely broad range of media; he has held or still holds union cards with the American Machinist and Aerospace Workers Union, the Butcher’s Union, and the Painter’s Union (he painted apartments and lofts in Soho during the “goldrush,” as he puts it). In a way Winters’s residency at The Society represents a circling back in both form and idea to some of the artist’s earliest works. A performance artist throughout the 1970s, Winters’s contribution to the 1975 Whitney Biennial was to “work” the exhibition wearing a bear costume as a character named W. B. Bearman, each day punching in and out on a timeclock installed in the museum.

Art critic Holland Cotter keenly characterized Winters’s artistic activity in a review in Art in America in 1986: “Although he is still a young man, Robin Winters has clocked up an impressive amount of active duty in the art world since his first California show in 1973. At heart a Conceptualist, he has explored so many forms (performance art, video, sculpture, books and painting among them) and bolted from so many commercial camps (he shows often but rarely in the same place twice) that you begin to suspect that it’s all an elaborate tease to keep us wondering what he will do next and where. Fortunately, Winters’s guessing game rewards patience: in it artist and art are of a piece, and the approach/avoidance, sniper-action strategy that has defined his career is also the crucial substance of his work.”

As he once remarked, “My dialogue is not necessarily to make the next addition to the art meta-program. I mean I’m a hopeless romantic in that I’m trying to make art out of real feelings, it isn’t just about what I think about Picasso or Duchamp as much as how I feel when I wake up.”

Winters’s work, then, is rooted in the impulse of making art; tempered (but not stifled) by an intellectual awareness of where art is shown, what it means, and whom it is for. His regular changing of venues and working methods, his love of work but avoidance of technical “mastery” (and to some extent “success”) has allowed his motivation to come to the fore. If Winters’s work is about anything it is the need to make art, and the belief that if one never stops thinking, playing and working some sort of magic will occur. Winters is an artist because art is vital, and his constant process of change only makes being an artist all the more rejuvenating and intense. It is this necessity, this vitality, that Winters communicates in his work, and that he hopes to share first hand in the course of his residency in the gallery. 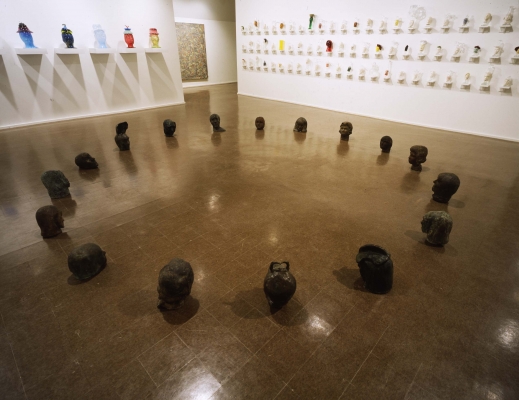