Over this past summer New York artist Zoe Leonard became internationally infamous for her installation in the Nue Gallerie of Documenta IX, in which she removed portraits of men from the 18th century painting galleries and replaced them with small black and white images of women’s genitals. These photographs, juxtaposed with the remaining 18th century paintings of women in parlor or pastoral scenes (and often partially disrobed), went straight to the point of the matter of the eroticized but repressed male gaze. Without pomp or pretense Leonard gave male viewers what they wanted, but in doing so upset the traditional power relationship to put male viewers on the defensive.

Since the mid-1980s, Leonard has been taking photographs of water, maps, museum displays, mirrors, aerial views of cities and villages, bullfights, and fashion shows. What has distinguished these images is the “unauthorized” air of their graininess and viewpoints. The pictures look as if they were taken in the split second opportunity of a moment (as from an airplane window), or in haste not to get caught at it. This attitude lends the images a transfixing and exclusive power, as if through them we are given access behind the scenes of some macabre museum or “under” the scenes of a fashion show. However, Leonard’s pictures are not exclusive in a campy “tabloid” way, but more in the personal way of her having seen or discovered something, the exact meaning of which is not quite clear. The more we look at what the photos depict the more mesmerized or repulsed we become. Leonard’s pictures are curiously both impulsive and calculated, keenly balanced between visceral fascination and political purpose.

Because of this balance, this push/pull that the images present, other clues begin to surface in the work as our cognitive faculties work to resolve the conflict. Gradually, what a bullfight, a wax anatomical model, a fashion show, and a mirror have in common along the lines of, say, ritualized violence, or spectatorship, or vanity, begins to connect for us in very personal ways. These associations in turn connect us to the images in that we begin to see aspects of ourselves within the work. Likewise, a similar process happens for Leonard in the creation of the images, and in her realization of the personal threads that run through them.

A recent interview in New York Native lends some insight into how Leonard comes to understand her images. She discusses here her most recent show at Paula Cooper Gallery: “This wax medical model [of a nude woman in a classical pose of fear whose stomach is open for anatomical examination] is in the basement of the Museum of Comparative Anatomy in Paris. It’s not on display; in fact, she was just unearthed and restored a couple of years ago. I came across a book with her on the cover, and I turned my trip to Paris into hunting her down. There were several wax models there which cut this edge between the seductive quality of the woman and the anatomical quality in a way I find disturbing.

“There’s a different approach to these anatomic models of women than any model I’ve seen of a man—and I’ve seen hundreds and hundreds. When I first started photographing these, I was thinking in terms of providing a critique of medical history. As I became more involved with the images, with these women—they’re my friends now—I’ve identified with them more and more. Sometimes I feel that my sexuality is both on display in a seductive way while it is also being attacked. I want to allow for a more purely sensory reading of this material as well as the layers of critique.

“In the photograph of the feline animal carrying the rodent [in its mouth], I’m frightened by this animal but I also feel that the animal looks afraid. I have been thinking about the ‘naturalness’ of aggression and the predatory instinct, about how hunting can be as frightening as being hunted. A friend said that this is about the hunting and capturing with a camera that is going on in the rest of this show. I know I reached a point in Paris, after finding the bearded woman and the seated anatomical model, when I changed my ticket and came home a week early. Every time I closed my eyes I saw disemboweled bodies. I don’t know how many more medical museums I can go to, although I’m still curious about hunting down the chastity belts. That history is painful. I felt more like a detective than a predator.

“It was on that trip to Paris, in fact, where I was thinking about how I was going to bridge the gap between my activist work and my personal work. I wanted to make art about women with women. I thought I wanted to start a feminist art collective and around six of us had a meeting. That group didn’t go anywhere, but some of the women now in Fierce Pussy [an activist women’s group in New York] came to those meetings.

“My personal aesthetic is nonpedantic. There’s never text and there’s usually no overstatement. And I don’t want to make overtly political work like Don Moffet or others. But changes brought about by the AIDS crisis have led me to do this kind of investigative work. I’m fascinated and horrified by the fact that what we’re experiencing now is not unique, but is completely consonant with dominant European-American history. Art is a place for me to pursue those thoughts, to make cross-disciplinary connections, in a personal way.”* 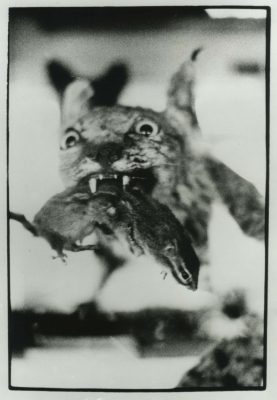