What is the true nature of reality? Is it the product of perception, something recreated in the mind? Or, does reality exist outside and independent of us? Descartes emphasized the former, putting a perceiving subject at the center of a reality whose existence outside the mind could then be doubted. This line of reasoning, popularized in the film The Matrix, also happens to be a cornerstone of Western philosophical thought, one stressing the human-centered nature of knowledge. At the same time it reflects reality, this knowledge also reveals the scope and ultimately the limits of human consciousness.

We deem the pursuit of knowledge noble. It is the higher part of ourselves, distinguishing us from other animals, making narcissism a trait seemingly endemic to our species. The name homo sapiens certainly implies no small amount of vanity. The questions formulated in our universities, libraries, laboratories, zoos, museums, and observatories may be addressed to an objective reality, but double as a mirror in which we cast the question as to whether we are alone in the universe. Is there another life form that comprehends the world around it and expresses that comprehension as much as we do, from the micro to the macro, from observing the deaths of stars to mapping genomes? Are we an exception to the countless species that have come and gone over the 3.5 billion years of life on earth? What do the trilobites tell us?

If only our narcissism were benign. Human and natural history have always been interwoven. The difference at this point in time is that our actions have unintended negative consequences on the natural environment beyond the possibility of mitigation. Given the extent of our ecological crisis, what we know cannot help but be weighed against what we do. If anything, what we do seems to be in spite of what we know.

This begs a simple question. For all of our knowledge, how well do we understand ourselves, especially in light of our status as a force of nature? Subsequent to Descartes, human consciousness has undergone numerous reappraisals including Freud’s theories of the unconscious, which try to account for rational and irrational behavior by way of basic drives and instincts born of our will to survive. The will to survive, however, has become the right to survive, a right whose abuses and excesses have made startlingly clear the fragile parameters governing terrestrial life. We flirt with extinction, an irrational provocation turned desire.

What better grist for the Freudian mill than fracking? But we already know this narrative. Deliverance’s most infamous scene harkens back to the film’s opening sequence whose theme is “the rape of the earth.” John Boorman’s 1972 adaptation of James Dickey’s 1970 novel serves as a prime example of the extent to which our understanding of the discrepancy between what we know and what we do has become the province of story, where the imagination acts as mediator between the conscious and unconscious. In Deliverance, the sublime under-goes a perverse allegorical inversion so as to live up to Edmund Burke’s description of a natural beauty that in addition to inspiring awe contains elements of “the dark, uncertain and confused.”

Our current fatalism has taken on regimented expression outside the province of an ecological parable. Deliverance was made when disaster movies were only coming into being as a genre. Ever since then, global warming and summer blockbusters have been in lockstep, record-breaking temperatures corresponding to record-breaking box office earnings. Draped over summer’s Hollywood tent-poles, as these big budget films are called, are plots sagging under the weight of humanity’s impending demise, whether it is at the hands of rabid zombies as in World War Z, or whether you happened to be holed-up in James Franco’s pad during the rapture as in This Is the End.

The threat of our end is a story as recyclable as cardboard. While ours is certainly not the only story to tell, we are for better or worse the narrator, one whose sense of standing outside the story as it involves our death is a form of denial. The trilobites tell us what we already know, that ‘happily ever after’ is a chapter belonging to another species. 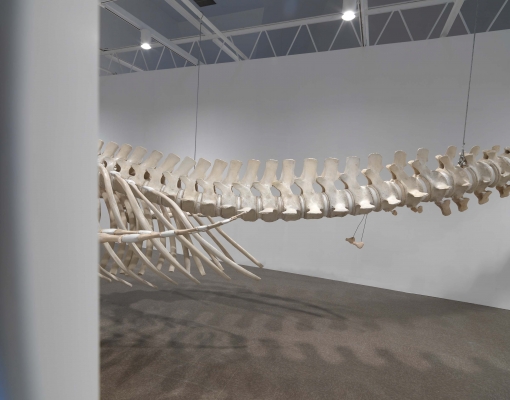