The Renaissance Society presents the first one-person United States museum exhibition by Madrid artist Juan Muñoz. The exhibition and installation will include selections of the artist’s drawings and sculptures as well as several sculptural situations, which the artist will build on site.

Muñoz has become quite renowned in Europe for his beautiful and startling installations. Several themes or symbols have been prevalent in these works: fragments of balconies, handrails, stages, and stairs which refer to the instances of physical isolation, support, and guidance these structures provide in our everyday interaction with them. Architectural columns and extremely optical and striated tile floors often punctuate and surround these fragments, crating spectacular and disorienting environments that stretch and distort one’s perception of space. In a Muñoz installation space must be traversed to be understood; the eye cannot be trusted to ascertain the full dimensions and relations of things. Hence Muñoz’s works are highly experiential, and require physical investigation.

Muñoz’s sculptural situations frequently include two of his recurrent character symbols: the ballerina and the dwarf. Muñoz’s ballerinas are often elevated on pedestals or stages and are symbolically legless, having instead weighted, rounded bottoms on which they are able to wobble and sway—to perform for their viewers almost in spite of themselves. Muñoz’s dwarfs, in contrast, are always disturbingly at rest, stock-still, cast in stone or concrete and incapable of movement. Their compacted forms often metaphorically relate to the structure and scale of other, oddly similar objects, such as a blunt shelf or a truncated column. In all of these instances, Muñoz’s figures constantly refer to viewer’s bodies, their proportions, and their movement through the gallery.

Switchblade knives also figure in Muñoz’s visual vocabulary, occasionally appearing in the hand of a ballerina, beneath the ledge of a stair, or on the underside of a seemingly safe handrail. These veiled and latent threats serve to complicate and re-define our interaction with Muñoz’s characters and objects, and often exaggerate the passive/aggressive status of art objects and their viewers.

Although there are deep literary traditions and conventions in Muñoz’s art—mythical figures, metaphors, symbolism, narratives—there is a haunting muteness and wordlessness to his works, an orchestrated visual and material silence which words or verbal analyses threaten to destroy. It is maybe for this reason that Muñoz is also interested in creative writing, poems mostly, and feels a need to express himself in words that have no place in his visual art. Consequently the Society will publish a catalogue in the style of the “nouveau roman” featuring the writings of Muñoz. 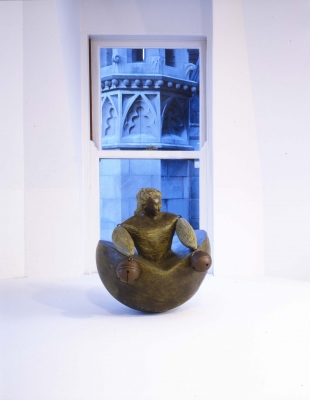