Not subject to an exact date, sometime within the past four decades, the era of small, black and white print photography came firmly to a close. Over an era spanning from 1839 (the year of photography’s invention) to, say, 1976, (the year of the Museum of Modern Art’s first monographic exhibition of color photography: William Eggelston’s Guide) photography evolved within, around and through its technological constraints, developing format and display conventions allowing us to identify it as a distinct medium. In the wake of the digital production, distribution and consumption of photographs, however, these conventions have become opaque codes signifying a medium-specificity now deemed historically modern.

Comprised of fifty-eight, small black-and-white photographic prints, framed with generously matted borders, and hung on three charcoal gray walls, John Neff’s exhibition revels in modernist photographic conventions. The Society’s windows have been tinted to enhance the atmosphere of intimacy surrounding photographs already of a decidedly private nature. While their subject matter falls into the staid categories of interiors, landscapes, portraits, and still life, the prints are anything but traditional.

To varying degrees, Neff’s prints all feature glitches and or streaks peculiar to scanning, indelibly marking them as digital era substrates. Rather than instances snatched from the otherwise seamless flow of time, the images read as transmissions reconstituted not as but from memory, where frailty and fixity of recall meet in ever-uncertain proportion. The photographs do not correspond to what we might see with our eyes open, but what we might remember when they are closed. In that regard, these images are more courtesy of darkness than light as they emerge from a void taking the form of a large, irregularly shaped patch of black that often looms from the image’s corner edge.

In Neff’s case, the camera, as it engages memory, is not a model of vision, but a mode of subjectivity. The production of affect resides with the mediation of reality well over and above what is depicted since the subject matter, be it a dead bird or a tangle of electrical chords, can be by turns, subjective, sentimental, or hopelessly mundane.

The photographs in the exhibition were taken using a camera Neff built himself by crudely mounting the lens and body of an old Kodak folding camera to a portable Canon scanner. The device is extremely rudimentary. It has an exposure time of several seconds and lacks both rangefinder and viewfinder. Mounting the entire device to a tripod, he took his first pictures in a friend’s Edgewater apartment in 2011. He was so taken aback by the results, he set for himself a task of regularly photographing his immediate surroundings, a practice resulting in the body of work on view at The Society. The pictures were taken over several months during which Neff felt very unselfconscious as an artist. No subject was off limits, especially those subjects (Lake Michigan, flowers in bloom, a cumulus cloud, a dish of pears) that under other circumstances would have fallen prey to a critical suspicion. More important than style is the naïve spirit with which these photos harken back to the dawn of photography.

The work’s period orientation, however, cuts two ways in that a relationship with the past doubles as an ambivalence with the present of the medium. Sure, the images are digitally constructed in the sense that they are built out of an accumulation of strata as the shutter’s click gives way to the scanner’s drone. But the scan lines destroy the temporal unity ascribed to “the decisive moment.” The picture featured on the reverse side of this poster, for example, is as hopelessly familiar as it is strange. Belonging to Lake Michigan, the waves in the foreground, because of the long exposure time, are of a natural phenomenon whose flux and flow has now been rendered hyperbolic. However subtle their unraveling of time, Neff’s images are aimed not at photography’s historical but its ontological foundations. As a result, the works and their attendant manner of framing and installation, conjure modernist conventions only to resist belonging to any era. This especially applies to a present in which the digital is touted as immaterial. With this body of work, Neff has taken an adamant position about the materiality of the image. For him, the image has to fall somewhere be it screen, paper or scanner bed.

For an artist who never displayed an allegiance to any medium or movement, this exhibition is a notable departure. Neff, however, is certainly no stranger to photography. Neff has worked with photographically-derived imagery since his graduate studies at the University of Illinois at Chicago (1999-2001). Photography, however, did not become a more central facet of his practice until 2004 when he took up making cyanotypes, a photo-based contact print process commonly used to make blueprints. The cyanotype appealed to Neff’s DIY sensibility. Although very much concerned with materials, the work at that time was driven by its content, which was a mix of highly discrete historical, art historical, and sexual interests as they both stem from and convene upon his body. By 2004, an unabashed homoeroticism had come to permeate the artist’s work, which he never considered as anything other than pursuits of his own interests. Tellingly, Neff’s artistic maturity coincided with a period in which the so-called identity politics of the 1990s had achieved exhaustion. Under its rubric, the body was contested as a site where history was reduced to biology and culture was collapsed to nature. Photography was enlisted to de- and reconstruct what was the locus of identity and identification, difference and differentiation. Neff was interested in making what, by 2004, could not fail to be called queer work not as a response to generalizable but specific concerns. His sculpture and photography from that period were an overt attempt to desublimate otherwise repressed or disguised urges, impulses and fetishes. Take for example, the exhibition Pornographic Pantograph with Allusion to Juan Sanchez Cotan (In Progress, Patent Pending)(2005-06) which, if you can imagine, was a successful stylistic hybrid of the work of Paul Thek and George Segal. In that conceptually and materially lumpy affair, cyanotypes and acetate prints mingled with tableaux featuring life-size plaster casts of the artist. The most memorable passage was a wheel-chair bound amputee the artist described as “operating an imaginary device for recreating and rephotographing images observed in gay male digital pornography.” Or, one could look at The Trans Genital Blueprint Series (2006), a portfolio of cyanotypes in which Neff, through the use of collage imagery, refashions his penis into a vagina, recalling the trials and tribulations of the abstract painter Forrest Bess whose spiritual beliefs lead him to perform a similar surgical procedure upon himself. Rather than have such a narrative serve as a subtext fueling an auratic quality as in Bess’s paintings, Neff prefers to engage the question of a relationship between sexual and artistic creativity explicitly.

Over the next couple of years, Neff, still enamored of the cyanotype and prints on sheets of clear acetate, made large scale works and series of works that were exclusively photo-based, including photomontages and larger images of singular figurative subjects made from tiling together individual prints. Now printing on cloth and Plexiglas, Neff insisted even more emphatically on the materiality of the image. Stylistically, the work was not merely far from modern, it was anti-modern, seemingly turning its back on Stieglitz in favor of rubbing shoulders with the likes of the Starn Twins.

As Neff’s cyanotypes increased in size, so too did the demand for greater resolution. The camera Neff needed, however, was cost prohibitive leading him to build the camera he used to produce the work on view at The Society. Mediated through scan lines whose roots reside in a time-based transmission, the images feel slightly relieved of the burden of representation. The reality these images reference is remote, as are the politics of representation bequeathed to successive generations of post-Stonewall artists. While gay males are made visible, these photographs are not about the lack of gay male visibility in a general and therefore public sense (the metaphor of the closet being increasingly inoperative). These photographs are private in the sense of being specific to the people, places, urges and quotidian observations that are Neff’s life. As a collective portrait, the photographs recall early to mid-twentieth century queer bohemian networks. These were the rudimentary basis of autonomous communities necessary for the sharing of thoughts and ideas; communities without which it is impossible to imagine culture as we know it not simply to have flowered in a New York of yore but a Chicago of now. 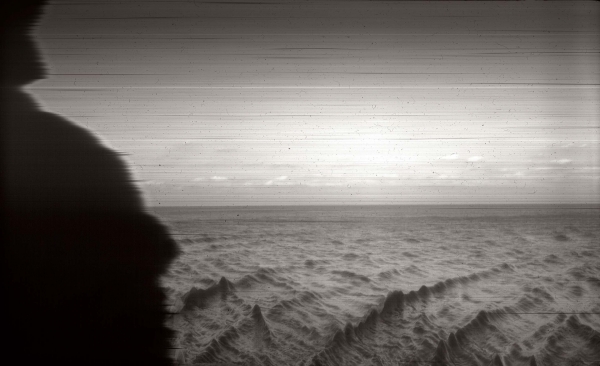