Passing Through the Opposite of What It Approaches

With Abstract Expressionism and each subsequent artistic movement through the late 1960s (Minimalism, Op Art, Conceptual Art), the stripe was subject to radical reappraisal. For Barnett Newman, the stripe, or “zip,” as he called it, was the vestigial remnant of composition, a line in the sand beyond which lies the monochrome. For Frank Stella, the stripe would echo the painting’s edge, resulting in a sober, nesting geometry that translated into purely self-referential works. Bridget Riley exploited the stripe’s inherent retinal aggression for effects that were wholly optical. And last but not least was the serialized, site-specific practice of Daniel Buren, who understood the stripe to be a “neutral form” with the bare minimum of visual qualities needed to catch one’s attention. Taken together, the work of these figures decisively leads to a conclusion of modernist painting.

Buren translated the endgame of self-reflexivity and seriality into institutional critique, a practice investigating the conditions (production, display, circulation) at the categorical root of the things and activities we call art. In this respect, institutional critique represents the terminus of an art for art’s sake, a trajectory that began in the mid-nineteenth century and ended with Conceptual Art in the late 1960s.

Not surprisingly, Buren’s generation was credited with the “death of painting.” His practice, however, developed out of a painterly logic that had been a century in the making, a modernist logic responsible for abstraction. The consequences of this logic deprived painting of any further room for historical development on all fronts save for its reconciliation with photography, a task that had been taken up by none other than Andy Warhol. At the same time the introduction of photomechanical procedures into painting reinforced the modernist logic of abstraction, it also opened up latitude within what nonetheless remained an endgame.

Stylistically, R. H. Quaytman’s paintings are legible as a heady brew of late modernist tropes, from the use of photo-based silkscreened imagery, to the unbridled resuscitation of Op Art. As polar extremes, these devices are deployed along a sliding scale with some of the paintings consisting exclusively of silkscreened imagery, others consisting exclusively of Op Art patterning, and others consisting of a layered combination of the two. Formally, the paintings revolve around a tension between a phenomenological immediacy and a photographically mediated sense of time and space.

The paintings are on plywood panels with beveled edges. In the form of a hand-painted facsimile of the plywood’s striped edge, Quaytman often incorporates the painting’s edge into or onto (depending on the spatial perspective) the painting itself. Against photographic imagery with a conspicuous sense of perspectival space, this striped-edge is thrown into high relief. Between a photo-graphically derived illusionistic sense of space on the one hand, and the fixation with the painting’s edge, which is then used to foreground the painting’s surface, on the other, the paintings invoke a discourse that is at once historical and ontological. These are paintings that all the way down to their mathematically calculated proportions wear an acute self-awareness on their sleeve.

As the repetition of sizes and certain imagery suggests, Quaytman’s is a serial practice. Telling in that regard is this definition taken from Spine, a catalogue in which the artist defines the overall project. “Paint: The medium is painting, not what the painting is made with. It used to be thought that the blank canvas was already a monochrome - now it is the choice itself, whether painting or not, that functions like the medium.”

Having been laid threadbare, painting is no longer an object but a “choice,” a conscious decision, a subscription to a history that, culminating in the blank canvas monochrome, has come again as an ideology - a set of beliefs, assumptions and expectations ordering our actions in relationship to a larger goal. Subscribing to painting as an ideology requires that the emphasis reserved for individual paintings be shifted on to a logic of production structuring an oeuvre. Quaytman likens this logic of production to that of a book. The paintings are conceived in groups referred to as “chapters,” an apt characterization of a practice best described as discursive.

Quaytman’s is also an extremely self-reflexive practice, an art about its immediate conditions. This reflexivity is arguably fundamental to seriality, which is predicated on the perfecting of the paradigm of an art for art’s sake, an art that like Stella’s Black Paintings does not refer to anything outside of itself. With that paradigm’s perfection, formal evolution could be replaced by repetition; a line of reasoning Buren continues to entertain with unmatched vigor and rigor.

Like a host of abstract painters before him, Buren arrived at a conclusive signature style (his now infamous stripe recipe) in empirical fashion. And like them, his paintings would forgo any stylistic change beyond that point. But unlike them, Buren took repetition as a starting rather than ending point. Repetition was a means to highlight the ever-changing context of the exhibition venue be it in or outside the museum/gallery. With the stripe pattern as a constant, Buren’s paintings could assume a variety of forms and be placed in a variety of settings where they could directly address specific formal and/or socio-political aspects of their location. Such was the case with Watch the Doors Please, a project in which Buren, after observing through a large window the passage of trains below the Art Institute of Chicago’s Morton wing, placed his stripes (in the form of adhesive vinyl strips) on the doors of the entire train fleet of Metra (Chicago’s commuter rail line). Running from 1980-82, this project, which Quaytman references on the work reproduced on the other side of this poster, was quickly followed by Buren’s 1983 solo exhibition at The Society, which he based on the gallery’s then invisible architectural symmetry. By extending/transferring the logic of painting’s self-reflexivity onto context, Buren would place painting, as opposed to the readymade, at the core of institutional critique.

Though perhaps wary of considering the practice a form of institutional critique, Quaytman would be hard pressed to deny drinking the Kool-Aid. Largely disavowed under the auspices of a postmodernism with two generations under its belt, a relationship between painting and institutional critique is impossible to rekindle in the form it took with Buren. The return to a self-reflexivity of that order would have to take into account the dialogue between painting and photography-based imagery that had become de rigueur in the latter portion of the 1970s and throughout the 1980s (in that respect, Quaytman is indebted to the “Pictures Generation.”)

But painting as Quaytman defines it would force the artist above all else to be slave to a larger history even when this entails subscribing to an ideology that paradoxically sealed off any possibility for the medium to develop along an historical continuum as it had over the succession of movements defining modernism. But Quaytman’s work begs that the modernist endgame not be confused with a fate which the artist eagerly accepts. Produced on a steadfast installment plan, the work is institution-bound with no bones about it. Yet, the paintings’ destiny as parlor fare is not to be taken for granted. Whereas Buren’s stripe paintings in being staunchly autonomous allowed art “as its own reality” to be taken out of the institution and into the sphere of everyday life, that freedom is unavailable to Quaytman, despite the artist’s deployment of Op Art. Although Quaytman subscribes to an ideology born of abstraction, in heeding the weight of a more recent history, namely the use of photographically-based representational imagery, the work is anything but autonomous. These circumstances present a contradiction. How can Quaytman’s work forsake its autonomy but still maintain an integrity to institutional critique? In contra-distinction to being autonomous, Quaytman has all but declared the work institution-dependent. The work must reflect the institution to which, for better or worse, it is obligated to return if it can be said to engage history turned ideology.

Quaytman’s ideological framework is hardly an end in itself. If anything it gives license to indulge content with both greater specificity and lyricism. Under the rubric of a painting is a painting is a painting is a painting, painting’s limits are its freedoms, a painting can be about anything no matter how significant or obscure. Each chapter’s imagery, whether it is derived from a polaroid taken by the artist or from the host venue’s archive, is developed in some fashion as a response to a given exhibition opportunity. The paintings can be extremely direct in what they signify or they can be the upshot of a daisy chain of thought, at times obtuse, at times idiosyncratic, and at times lyrical. If associations warrant, Quaytman can even incorporate concerns from previous chapters or from inspiring works of literature as is the case with this exhibition’s title which is taken from The Passion According to G.H., by Brazilian novelist Clarice Lispector. But in any case, the exhibition opportunity lays the groundwork for the game to begin.

The Society presents an embarrassment of riches to a radical scavenger such as Quaytman who could find visual and intellectual treasure seemingly anywhere. Chapter 25 will reflect on aspects of the 40-year tenure of The Society’s Executive Director, Susanne Ghez. Featuring a roster of seminal figures, her first decade at the helm was a dizzying recapitulation of minimal and conceptual trends. Ghez cites as her mentor Chicago-based curator and art historian Anne Rorimer, many of whose writings have become primary source materials for the initial critical reception of those movements. This relationship would form a crucial part of The Society’s programmatic footprint as Ghez, at the same time that she would embrace a series of artworld paradigm shifts, would continue to work through the 1980s and into the 1990s in systematic fashion with first generation minimal and conceptual artists such as Daniel Buren, John Knight, Robert Barry, Hanne Darboven, On Kawara, Michael Asher, and Niele Toroni. In that regard, Quaytman’s practice, a full two generations removed from the outset of Ghez’s career, completes something of a circuit. Describing in an interview the open relationship among the Chapters of work, Quaytman could very well have been speaking for Ghez and the significance of this exhibition: “I like the idea that the first chapter in a book is not put away but rather always available for the last chapter.” 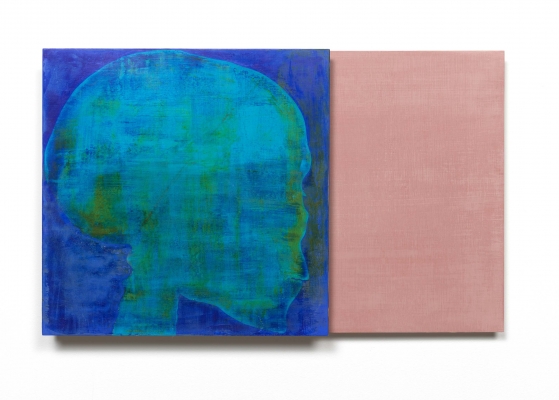 Passing Through The Opposite of What It Approaches, Chapter 25