By the late 1960s, Harlem, New York, a city within a city, had an extremely illustrious career as a photographic subject. Over the course of the Twentieth Century, its vibrant public life made it a staple of street photography. Given that black life played itself out against discrimination, not to mention negative stereotypes, portrayals of Harlem and its denizens came to exemplify photography’s humanist impulse; an impulse that was also subject a mandate calling for dignified representations of blacks. From the Harlem Renaissance through the Civil Rights Movement, in an arc from, say, James Van Der Zee to Bruce Davidson, images of life in Harlem took on at one and the same time an increasing humanist depth and political urgency.

In 1975, when a 22-year-old Dawoud Bey, camera slung around his neck, took to the streets of Harlem, he would begin his career by recapitulating a trajectory come tradition. Accordingly, Bey had at his disposal a host of canonical figures from whom to draw inspiration be it Aaron Siskind or Roy de Carava, Helen Levitt or Richard Avedon. Picture by picture, the body of work that would become Harlem, U.S.A, situated itself confidently, lovingly and above all discursively within a history of Harlem street photography. With respect to Bey’s relationship to a daunting legacy, the subjects and situations he had chosen were all tried and true. More substantial than any change in subject matter, was a change in context as the 1960s witnessed the emergence of a new Black political and cultural consciousness to which no Black artist of Bey’s generation was immune.

Bey worked his uptown beat four years before premiering the portfolio at The Studio Museum in Harlem in 1979. Two years before Bey’s exhibition, The Studio Museum, founded in 1968, opened the doors to a new building. Although there had been exhibitions about Harlem, notably Harlem On My Mind, (The Metropolitan Museum of Art, 1969) Bruce Davidson’s East 100th Street (The Museum of Modern Art, 1970), it was of no small significance that Bey’s was an exhibition about Harlem, in Harlem, at a freshly minted venue fully manifesting the values of cultural self-determination. Here was a black artist photographing black life for a black audience. If, over and above being street photography, the images that comprise Harlem U.S.A were about identity, then it was one predicated on a self-identification shared in triangulated fashion between the photographer, the subject, and the audience. Given where they were shown, the images sought to solicit the willful blurring of distinctions between who is being represented by and to whom. These images were the site of communion, an inter-subjective connectedness confirming the ongoing imaginings of community where “I” might become “we.”

Over the course of nearly four decades and through several bodies of work, Bey, in many respects, has come full circle. Picturing People surveys his career subsequent to Harlem U.S.A. The notion of community, all but implicit in Harlem U.S.A., has become wholly explicit in his newest body of work, titled Strangers/Community, an example of which is featured on the reverse side of this poster. Since 2010, Bey has been photographing two individuals that although members of the same socio-geographic community, are strangers to one another. Casually positioned side-by-side, between them are differences in age, race, comportment, gender etc. differences calling into question the terms on which community is imagined in relation to self and vice versa. A project that began in Atlanta under the aegis of Emory University has now been brought to Hyde Park, Chicago, home of both the artist and the greater University of Chicago community. Picturing People contains three new works from the Strangers/Community whose sitters were photographed in various University locals, including the Booth School of Business, Ida Noyes Hall, and the Mansueto Library.

Portraiture is Bey’s stock in trade. By and large, he has maintained integrity to the genre in its classical sense. This is notable given that Bey’s artistic maturity coincided with a staunch and extensive critique of photography’s claim to represent an objective truth. Bey’s generation is one for whom photography could no longer be considered a transparent medium through which reality spoke. As the site where “the real” assumes an evidential order, the photograph was where meaning, and deep-seated beliefs were best contested. An image’s truth was not to be measured in terms of its correspondence to a reality before the lens. Instead, it was measured against other representations, which it could challenge, displace, or augment thereby bringing different truths or meanings to light. As it relates to the human subject, with its supposedly immutable codes of race, gender and sexuality, this entailed the production of alternative and counter-narratives for which staged photography proved indispensable. While Bey was fully receptive to this agenda (tellingly, Carrie Mae Weems was a student of Bey’s), of greater importance to him was the emergent rhetoric of multiculturalism and its emphasis on race and representation. Bey then translated an issue unavoidably fraught with politics into a genre specific investigation of portraiture’s formal mechanics beginning with the relationship between photographer and subject.

The informal portraiture that was a mainstay of Harlem U.S.A. waned in the street photography of the mid-1980s only to re-emerge with a vengeance in 1988. That year, Bey traded in his 35 mm SLR for a tri-pod-mounted 4x5 inch view camera. He began using Polaroid Positive/Negative Type 55 film, which in addition to making an on-the-spot print also generated a negative. Although still taken on the streets, portraits made with this camera were a highly formal affair, forcing Bey to interact with his subject. In exchange for their time (upwards of 20 minutes) Bey gave them the resulting Polaroid print. Focusing on a central figure whose gaze is aimed squarely at the camera, these images are of a different tone and tenor than his previous work, the turn from community to individuals having been made complete. Graciously removing themselves from the flow of time, the sitters are not depicted as happenstance but declarative selves. They are captured frontally. More than visible, they are wholly present, giving the camera their undivided attention, as seemingly aware of the viewer as the viewer is of them. They are assured, composed, self-possessed, conscious of their appearance before the lens and the ultimate succession of gazes that will fall upon their likeness in that moment time and time again.

Bey, however, became increasingly interested in his subjects to the exclusion of their environs, having concluded that the sitters, regardless of whether the portrait was formal or informal, would be read in relation to their context. Bey would then forsake the streets for the studio. At that same time, he was invited to use the large format 20 x 24 inch Polaroid camera. The isolation of the subject, in conjunction with that camera’s robust formal capabilities, further propelled Bey’s investigation away from the social and more toward the formal dimension of portraiture where certain limits quickly became apparent. In isolating the subject, the face became the image’s primary index. As a result, the physiognomic as it defines portraiture would also delimit portraiture. In producing a fixed image of his subject, about whom the viewer could produce a kind of summary psychological evaluation, Bey would be culpable in producing precisely the kind of “truth” of which he had learned to be wary. As a response, Bey resorted to the diptych, photographing his sitter twice in order to destabilize a fixed reading. A latter day example in the exhibition is the portrait of Stuart Hall, where the noted scholar and social theorist acknowledges the camera’s presence in one instance only to be, distracted, withdrawn in thought perhaps, the next. As early as 1993, Bey deployed the multi-panel format to group portraits. With the isolated subjects as the sole focus of his attention, he began zooming in and magnifying the scale of their faces, ultimately fragmenting them, subjecting physiognomy to a kind of analytic cubism.

Yet the shift to a studio-based portrait practice, even if made on exclusively formal grounds, would not have been without its politics. In regard to the issue of race and representation, by the late 1980s, advertising, fuelled by the sports and music industries, co-opted the mandate for positive imagery of blacks, recycling it at warp-speed through its own fun-house of mirrors, dissolving the ground from which to formulate a counter-narrative. Bey’s fragmented, multi-paneled works from the early and mid-1990s were read as a response to conditions in which images of black subjects, no longer able to be critiqued from the outside, had to be deconstructed from within. With respect to giving his subjects dignified representation, Bey’s political sympathies within the arena of visual culture are obvious. While Bey’s procedure offered itself up to a critical significance at the symbolic level, there was a formal precondition of equal, if not greater, significance that Bey had already put into effect at the literal level. Before fragmenting the figure, Bey understood that to isolate the human subject from any kind of context is to have already abstracted the figure. Bey’s fragmentation of his subject should be understood as an extension and reflection of a logic put into place by the initial decision to move from street to studio. Despite their legibility in relationship to the politics of representation, Bey’s decisions were guided more fundamentally by formalist impulses, making his 2001 return to formal street portraits all the more dramatic.

Young people are perhaps Bey’s favorite subject. This was discernible even in Harlem U.S.A. The most memorable of the formal street portraits of the late 1980s are likewise those of youth. The sitter in A Boy Eating a Foxy Pop delivers a deadpan stare so full of an ironic self-awareness as to be straight from Buster Keaton’s playbook. Bey’s interest in photographing young people was formalized in 1992 when he was invited to be artist-in-residence at the Addison Gallery of American Art at Phillips Academy, Andover Massachusetts. Since then, young people have remained a staple of his work. From 2002 to 2006, he embarked on a series residencies designed exclusively to work with high school students. The resulting body of work, entitled Class Pictures, came from projects in Chicago, Detroit, Orlando, New York, San Francisco, and a return to Andover, Massachusetts. Bey’s interest in young people is at a social level. In his words, “they are the arbiters of style in the community; their appearance speaks most strongly of how a community of people defines themselves at a particular moment.”

As the “arbiters of style,” young people follow the winds of fashion, which, as winds will, blow this way and that. This speaks to a mutability of being that is part and parcel of being young. This mutability serves as a foil to postmodernism’s contestations over other immutable codes ascribed to our being. With respect to youth, it is not only about their being, i.e. who they are in the moment of the photo, but also who they stand to become. This could likewise be said of Bey’s recent project Strangers/Community. But instead of being posed to an individual young subject, an “I”, the question of who one stands to become could be posed to a community, a “we.” For the most recent chapter of Strangers, this would be the community of Hyde Park.

Hyde Park, however, is not only home to Dawoud Bey and the University of Chicago, it is also President Obama’s old stomping grounds. This chapter of Strangers not only poses questions of representation and identity to individuals and community but, how, based on these questions, we imagine the nation as a whole. Based on Strangers/Community, the process of imagining who “we” are nationally then takes place from the inside out. Like Harlem, Hyde Park U.S.A, is a place where hope hardly need be audacious. 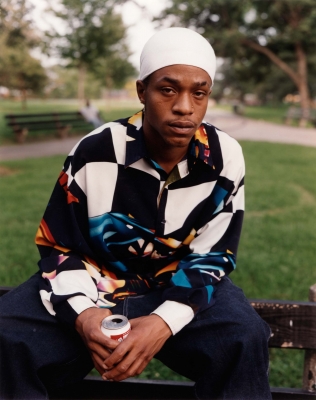