From Praxiteles to Rodin, a central paradigm of figure sculpture has been the breathing of life into inert materials. The appearance of the mannequin within the fine arts, however, signaled a shift from registering the soul’s presence to a fascination with its absence, a condition synonymous with the rise of the commodity. This diagnosis was confirmed as early as 1912 by Eugene Atget, whose photographs of mannequin displays recast the Parisian store window as mirror to the modern subject. Desire, constantly piqued along the boulevard, was indicative of lack, a chasm created by the discrepancy between who one is versus who one wants to be. Situated at the locus of desire, the mannequins in Atget’s photos palpably reflect a void in the self. That the Surrealists should incorporate mannequins into their work not long after was all but a fait accompli. Lining the hallway leading into the 1938 Exposition Internationale du Surréalisme were fifteen female mannequins each treated by a different artist. Describing his submission André Masson wrote:

Her head is imprisoned in a birdcage, her face caught exactly within the cage door and her mouth masked, with a pansy directly over the opening.

She cannot speak; she is entrapped even as she is decorated, wearing at once too much and too little, dressed up and dressed down, naked and rendered mute, added to and subtracted from, but most of all entrapped.

Masson could very well have been describing a mannequin featured in Glasgow-based artist Cathy Wilkes’ I Give You All My Money, 2008, an installation featuring two artist-treated mannequins set amongst a pair of super market checkout counters. The head of one of Wilkes’ mannequins is likewise covered by a birdcage, a nod to Masson no doubt. Leaning back on one arm, this mannequin sits atop a conveyor belt, red and black paint smeared respectively around its torso and face. The other wears a nurse’s cap with a Red Cross insignia. Casually crossed arms resting on crossed legs, this mannequin matter-of-factly sits on a toilet. From a wire tightly wrapped midway down its skull hangs an odd assortment of objects—teacup, frying pan, piece of wood, string of brass bells, strip of red cloth. From its lower hand dangle three metal horseshoe forms. As chimes, these suspended elements signify a racket belonging to what could only be a charivari. Seated on a commode in public view, this mannequin is indeed subject to a ritual of shame that is the inverse of desire. This reveals the nod to Masson to be a gesture of appropriation, one that links these artists only for the sake of more clearly articulating the social and art historical turn of events that in fact separate a post-feminist Wilkes (b. 1967) from a Surrealist Masson.

I Give You All My Money is an eerie mise en scene, one whose art historical debts, be they owed to Surrealism or, say, the tableaux of Ed and Nancy Kienholz, would have to compete with scenes from well known films such as George Romero’s Dawn of the Dead (1978) or Francis Lawrence’s I Am Legend (2007). In these films, retail sites, replete with mannequins and zombies, become stages for existential reflection not on a post human but a post humanist world that is here and now. Set within an apocalyptic narrative, these scenes by default are a dystopian critique of capitalism. While I Give You All My Money cannot avoid harboring similar sentiments, such social commentary is subsumed to the point of dissolution within a narrative driven more by its detailed components. Well before any critique, the installation’s many soiled dishes immediately and directly impart a sense of the abject. Punctuated by a stove, a toilet, and a white ladder, the installation proves anything but a cogent mise en scene of retail transaction. Given the manner these last three components allude synecdochically and symbolically to kitchen, bathroom and an ascension to heaven, I Give You All My Money is a highly compressed narrative juxtaposing the immaterial sacred against the materially profane. Such a reading is reinforced by the stacks of flat clay tiles, the sides of which, like the nurse’s cap, feature a cross. The white ladder references a heaven whose presence, nowhere felt in the installation, is its absence. As a stark white object, the ladder, in its visual purity, throws into staunch relief an all too earthly life defined by a never-ending cycle of shopping, eating, shitting and, as the installation’s title makes clear, sacrifice.

I Give You All My Money is a conspicuous title. To whom is this declaration of sacrifice addressed? Are they the words of disgruntled Whole Foods customers? Are they Eric Clapton lyrics? Is it a barb from husband to wife à la The Honeymooners? In any case, the nature of the sacrifice would appear economic. Wilkes’ work, however, consists of objects recurring as leitmotifs taking on symbolic proportion with the theme of motherhood achieving the clearest articulation. Since 2005, Wilkes’ installations have regularly featured strollers, jars of Bonne Maman preserves, children’s’ spoons, dolls and toys. Whereas the title signifies economic sacrifice, the objects have consistently referenced the sacrifices of motherhood, sacrifices entailing the flesh. As portrayed by Wilkes, the profane nature of motherhood operates as a literal foil to the symbolic sacrifices attributed to Christ. In this regard, the symbolic sacrifices of men transcend, i.e. serve to cover, the real sacrifices of women. Moreover, motherhood is a sacrifice, which the mannequins, as ideal female forms, could be read as unwilling to make. Worse than profane, motherhood is here caught between the rock of Christianity and the hard place of a post-feminism having yet to make peace with motherhood. As a set of concerns, the parade of a soulless vanity, a horizon on which heaven is nowhere to be seen, and daily routines of subsistence come again as ritual sacrifice make for an installation whose net effect just ain’t pretty.

Wilkes’ work is ultimately personal. She has, in her words, “no expectation that an audience will participate” and “no need for someone to fully understand.” The separation between artist and viewer, “has remained unbridgeable.” For her, the ability for the artist to express their experiences and thereby achieve communion with the viewer is simply impossible. Admitting such failure, however, creates conditions such that “all objects can become transcendental.” It does not matter whether one uses a painting or a dirty dish to signify some aspect of the divine; relative to the subject, both are mere base matter. By that token, I Give You All My Money, while it holds no burning bushes or blue light specials, is a very rich forest of signs. 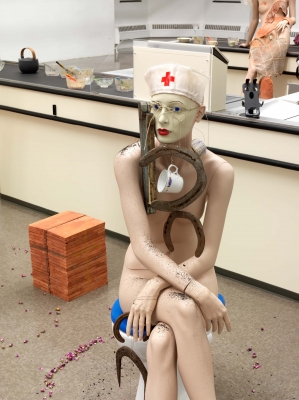