In 2008, The Script Factory offered a three-day workshop in Brussels. Led by two British screenwriters, it was designed for those interested in developing stories for television. Antwerp-based artist Anne-Mie Van Kerckhoven received the ad through her affiliation with a new media forum to which she has belonged for over twenty years. The ad piqued a long-standing curiosity about television’s narrative mechanics, notably open serials, where day-in-day-out reality is grist for the mill of soap opera fantasy. Van Kerckhoven enrolled without looking for anything specific to her own art practice, which has always been engaged with new media and mass media critique. Toward the end of the workshop, the participants were divided into small groups, each giving treatment to a story set in a Brussels apartment.

Equipped with a bare-bones mise en scène and freshly acquired lessons in plot and character development, the groups came up with scenarios that took on lives of their own. Van Kerckhoven was not as interested in the final product as she was the idea of a narrative formula catering to our psychological and emotional needs. Two years later, she used the notes she took for Mastering the Horizon, a series of seventeen large digital prints, one of which is featured on the other side of this poster.

In style, scale, and number, these are images that shamelessly flaunt their seamless means of production. Scanner, screen, and ink jet printer, however, are at the service of prints legible first and foremost as collage. Her signature pictorial elements - images of women, planes of vibrant color, and blocks of text - are discretely layered or juxtaposed, crafting a space where, in fine phantasmagoric fashion, any- and everything can happen. The conditions that made collage an indispensable mode of expression a century ago obviously remain in effect. The difference between now and then is one of degree as present-day turbo-capitalism warrants heralding in toxic Day-Glo fashion.

Mastering the Horizon is one of several new bodies of work Van Kerckhoven has produced for her exhibition at The Society. Her highly heterogeneous output includes drawing, painting, video, writing, interactive computer animations, and performance (she is a founding member of the noise band Club Moral). Along-side Mastering the Horizon will be another series of computer prints, four suites of drawings and several computer animations, two of which will be interactive. The designation closest to describing Van Kerckhoven’s range of activities is the practically defunct term intermedia artist. Although she had no intention of pursuing it professionally, Van Kerckhoven was trained in graphic design. She chose it as a field of study because of what she perceived as its interdisciplinary nature. In that regard, Van Kerckhoven’s flirtation with intermedia arguably began with text and image, the combination of which remains at the heart of her practice, notably the drawings, which have a methodology identical to that of Raymond Pettibon.

Electronic media have also been a part of her practice since the outset of her career. In fact, it informs her aesthetic well outside the mere production of videos and computer animation. Her use of neon-colored Plexiglas, her vivid, unmodulated palette, and, at times, the rudimentary directness of her illustration, are an emulation of electronic media in the spirit of its effects. Composed in all-over fashion, the prints that make up Mastering the Horizon facilitate the eyes’ movement from element to element, creating a sense of distraction that is indeed televisual.

The exhibition’s title, In A Sarurnian World, was inspired by Paul Verlaine’s Poèmes saturniens. While there is a suite of drawings whose text references this work directly, more importantly, the exhibition’s title betrays Van Kerckhoven’s interest in astrology, mythology, mysticism, and the occult. This is a counterpoint to her interest in science. For Van Kerckhoven these ways of understanding the world have equal value in portraying the human mind’s steadfast determination to make meaning, regardless of whether the methods are empirical or intuitive, and regardless of whether the conclusions are rational or irrational. Van Kerckhoven is interested in generating new, uncharted meaning by juxtaposing text and image in uncanny fashion. Based on her work, the quickest way to the uncanny is through images of nude women most of which she appropriates from her collection of pre-Sexual Revolution soft pornography.

Although her pornographic source material has a thriving present day incarnation, it still belongs to a past, making it a remote form of kitsch. We are far less accountable to these images than to their present day successors, which include the likes of, say, The American Apparel ad campaign. Our culture is awash with exploitative images of women, which function symbolically insofar as they conform to established codes of meaning, making them a language, one that is deployed daily by “the hidden persuaders,” i.e. those culture industry engineers, market research analysts, designers, stylists, creative directors, etc. whose work speaks to our unconscious. But Van Kerckhoven is less interested in value judgment and more interested in the idea that these images produce effects, ones that can be said to be the province of a science, revealing Van Kerckhoven above all else to be a formalist, albeit in what many take to be feminist clothing. 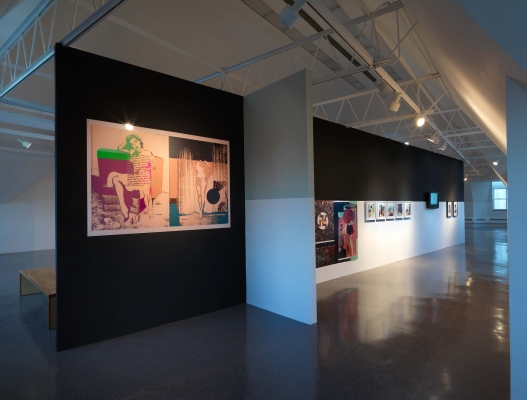 In A Saturnian World