In 1914, Freud wrote Remembering, Repeating and Working Through. It was the second in a series of papers about the techniques of psychoanalysis. Although Freud had long since abandoned hypnosis in favor of free association, he had yet to elaborate on the latter method’s virtues and challenges as a means of accessing the unconscious. Unlike hypnosis, free associ-ation took place while the patient was in a conscious state. It allowed the unconscious to speak through the conscious mind thereby registering the unconscious as an ever-present force. Using “thought-connection,” free association illustrated that repressed memories are not irretrievably forgotten but instead they go “un-thought” about, which means they are fully available and at work in the unconscious. Freud was adamant that psychological illnesses “not be treated as events of the past, but as a present-day force.”

Well before repressed memories achieve representation in our conscious minds, they manifest themselves in action. These actions will be repeated, and their repetition becomes a substitute for remembering. Repetition will also occur in session, becoming symptomatic of resistance to treatment. In no small measure, Remembering, Repeating and Working Through is Freud’s call for patience since the analyst’s goal is to convert the compulsion to repeat into an impulse to remember. The analyst must work against an innate resistance in which repetition threatens to replace remembering altogether. Paradoxically, to render repetition “harmless, and indeed useful,” Freud recommends the analyst court repetition-compulsion, treating it as a “playground in which it is allowed to expand in almost complete freedom and in which it is expected to display to us everything in the way of pathogenic instincts that is hidden in the patient’s mind.”

The ubiquity of what qualifies as repetition-compulsion in contemporary art practice makes it an easy target for Freudian analysis. But linking creativity to neurosis has always been a questionable endeavor. Psychoanalytic interpretations of art have often been criticized for reducing artwork to mere symptoms. By reducing art to a symptom, however, psycho-analytic interpretations are neutral in judgments of taste. Distinguishing good art from bad art is beside the point. Under psychoanalytic auspices, all art has potential value in terms of what it reveals about its maker.

If the field of aesthetics, in a classical sense, was interested in the beautiful, the sublime, and the attractive, i.e. feelings of a positive nature, then psychoanalysis represented a fundamental and wholesale reconsideration of the correlation between object and sentiment. More than simply expand the discourse of aesthetics to encompass works considered ugly, psychoanalysis established a rubric under which the aesthetic experience was an alternating rather than direct current; either the ugly or the beautiful could produce positive or negative sentiments. Under this rubric, the locus of pleasure and/or displeasure resides in the exchange between artwork and viewer. This put psychoanalysis in an extremely progressive position with respect to the advent of modernism whose dissolution of traditional aesthetic values, to state it in crude but relevant terms, was the shit hitting the fan.

Chicago-based artist William J. O’Brien (b. 1975) has beaten any would-be critic/analyst to the diagnostic punch. In Freudian terms, his art is unabashed sublimation, the transformation of lower libidinal drives into higher cultural forms. Rather than the clinical alleviation of his “pathogenic instincts,” O’Brien prefers to openly share them as art. He is conspicuously prolific. His torrent of production includes drawings, ceramics, paintings, sculptures, collages, videos, zines, and tapestries, all of a volume that makes them, as symptoms, far outweigh their source in any disease. He has consciously forsaken remembering in favor of a repetition-compulsion that in his case translates more accurately as repetition-combustion. He characterizes his practice in terms of “discipline,” and “exertion” and relates art-making to a therapeutic activity helping him achieve a psychic balance. In his words, “it’s like being able to go in and do something everyday consistently creates a certain level of steadfastness in the mind and the body, and I think that is what has made me an artist rather than pursuit of beauty.”

As the product of simple but obsessively repeated gestures, his art objects (drawings, paintings, sculptures and tapestries) come across as ritual-driven fetishes rather than pre-conceived compositions. As a result, categories of form read simply as different outlets for an undifferentiated creativity that is a force larger than its channels. With a delightful lack of impulse control, surfaces, be they those of a page, pot, or painting, are marked end to end with lines, pricks, or incisions, or covered with slats of wood, or bound in twine before being slathered with paint, plaster, and/or glitter. O’Brien’s exhibition at the Society consists of approximately 100 ceramics, all executed within the last six years.

O’Brien hails from Newberry, Ohio, where he was home-schooled for the latter portion of his high school years. For an art class, he took up ceramics at a community arts center. His interest in art supplanted his plan to get a degree in math at Chicago’s Loyola University, where he earned an undergraduate degree concentrating instead on ceramics. While there were standard figurative influences such as Steven De Staebler, Viola Frey, Ruth Duckworth, Picasso, Toshiko Takaezu, the West Coast funk ceramicists, and Miro, his influences also displayed a healthy pluralism, running the gamut from Etruscan terracotta to miyako porcelain. But of greater importance, O’Brien states “as a queer-identified person, my gravitation to art was more a validation of my voice than my talent. It had more to do with feeling like my voice was valid versus being about my being really good at making a still-life.” The illustrative content in his early work, much of which featured a combination of sexually charged and religious imagery, quickly gave way to a form-based content. “When I actually took out that literal content, and put it physically through the material, the sort of connotations of, like, ritualistic objects, came through better, at least in terms of how people related to the work.”

Following his undergraduate studies, O’Brien moved briefly to San Francisco, where he worked as an instructor at Creativity Explored, an arts center for the developmentally disabled. After that, he moved to New York, working in advertising while taking ceramics classes at Greenwich House Pottery. During that time, O’Brien recalls being drawn to a range of work from the likes of Cy Twombly to German Expressionist wood sculptures, to African, Oceanic, and Polynesian sculpture. In a telling anecdote, at Greenwich House Pottery, he made the acquaintance of Sally Saul, the wife of painter Peter Saul, who one day noticed and responded positively to a work of O’Brien’s entitled Siamese Nipple Fetish No. 2. (There was never a No. 1.) At the time, O’Brien admits to not having known who Peter Saul was. Saul began informing O’Brien of a host references, for example Picasso’s deep interest in puppets, which O’Brien took to heart as the genuine effort to make him see the value of his work.

In graduate school, O’Brien made anything but ceramics, a decision he relates to an anxiety about a hierarchy in which craft is subordinate to the fine arts. (Despite this he enrolled in the School of the Art Institute of Chicago’s Fiber and Material Studies Department.) As he states, “Coming out with an undergraduate degree in ceramics, I wanted to be an artist. I didn’t want to be a ceramicist, so I consciously worked outside that methodology.” His graduation in 2005 marked his return to ceramics. Not realizing how much he missed it, O’Brien subsequently went on to produce hundreds of forms including busts, vessels, platters, and sculptures whose scale and lack of function relegates them to a table-bound class of thing that for want of a better term are best described simply as objet d’art.

Like many fresh graduates, Obrien was led to question the value of art making. With no exhibition prospects, let alone the idea of gallery representation in what was becoming an increasingly depressed economy, O’Brien likens his mindset from that period to Sun Ra, or an architect, who in “designing plans for things that will never be built” has nonetheless committed herself to acting upon fantasy, and in so doing fashions an alternate reality. But dreams without discipline mean nothing to O’Brien whose labor would assert that creativity is a force beyond the question of value. “I have a tendency to make a lot of things, and this will continue until my death probably. So, for me the struggle lies in relinquishing control. I don’t try to find a critical value in what I am doing.”

With respect to his ceramic works, O’Brien’s abandoning critical value signals his willingness to accept the good, the bad and the ugly. O’Brien’s understanding of creativity as a force beyond the question of value, however, demands that judgments of taste not be applied to his work in exclusivity as it resides within the fine art realm but across the full spectrum of ceramics, which notably includes the whole class of community arts center production he refers to as stay-at-home-ceramics. Still producing his own ceramics at a community arts center, O’Brien views his work with exceptional humility, stating “it was just coincidental that I started to master the material.” Regarding authorship, O’Brien would chalk it up to the muses, if not the channeling of spirits. “I struggle tremendously with my own authorship, asking myself, who is making this work. Who is this person? Who makes this? Because I don’t really think about it as my hand.” Not aimed at mastery, O’Brien’s discipline is geared toward dispelling a sense of self-consciousness. It is not surprising that a generous portion of his work, seen all at once, bears resemblance to the hordes of ceramic whatnots produced daily at community arts centers, as well as to a host of seminal Twentieth Century artists and ethnographic objects from throughout history. His quizzical goal, like many of his artistic brethren, is to find for himself an origin of creativity, one producing symptoms that by another name might be called joy. 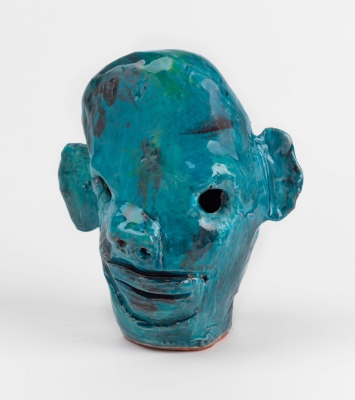