How Long Is Now?

In the decade spanning 1958 to 1968, developments in American visual art moved at a fast clip. In the wake of a triumphal Abstract Expressionism came Pop Art, Minimalism and Conceptual Art. Keeping abreast was a challenge fielded by the burgeoning rank of critics eager to sort out debates well in advance of history. Over and above the artwork itself, proof of a major paradigm shift lay in the robust discourse surrounding the so-called “new art.” The polemics were anything but centralized, being argued by artists, critics and curators through exhibition catalogues, reviews and art journals. E.P. Dutton & Co.’s decision to publish a series of “new art” anthologies was all but a fait accompli. Between 1965 and 1968 it produced three volumes edited by the critic Gregory Battcock: The New Art (1965), The New American Cinema (1967), and Minimal Art: A Critical Anthology (1968). Of these, Minimal Art has by far had the longest lease on life. It remains in circulation, having been reprinted by the University of California Press in 1995. In addition to seminal essays by Michael Fried (“Art and Objecthood”), Clement Greenberg (“The Recentness of Sculpture”), Robert Morris (“Notes on Sculpture”), and Barbara Rose (“ABC Art”), it contains the interview with Frank Stella from whence his dictum, “What you see, is what you see,” as well as Tony Smith’s recounting of his epiphanic drive along the unfinished New Jersey Turnpike. Whereas Dutton had its eye on a 1968 readership, the transmission of these documents over two generations unwittingly converted the genealogy of Minimalism into the stuff of myth.

Minimalism’s genealogy is mythic precisely because the work is situated in and outside of history. As the culmination of an art for art’s sake, Minimalism is securely tethered to a trajectory of modernism dating as far back as Manet. The movement’s key figures expanded a self-reflexivity previously reserved for painting into an equation comprised of object, viewer, space, and most important, time. Paradoxically, extending what was a historically evolving logic only served to sever their work’s relationship with history. Minimalism’s staunch anti-representational posture, combined with a recourse to phenomenology, renders it ahistorical by design. Encountered as an obligatory period room, minimalist works instigate a ritual participation in a time-mediated aesthetic experience rooted in the here and now. Minimalism, however, was above all else highly self-conscious. Inscribed in the ahistorical “real time” aesthetic of the here and now is an historical consciousness belonging to the there and then of Minimalism’s inception. The past engendered by Minimalist period rooms is a past responsible for crafting an eternal present, a degree zero, an artistic logic so conclusive that, no matter how dated or of its moment, extends into this present, displacing all history save for that which brought those works of art into being. As a result, these period rooms function as portals allowing this present to co-exist with a present from half a century ago.

For Dublin-based artist Gerard Byrne (b.1969), the medium best suited for soliciting from Minimalism a tale of two presents is film. His multi-channel video installation, A thing is a hole in a thing it is not, titled with a quote from Carl Andre, consists of vignettes whose mainstay are dramatizations. Two of these. sculptor Tony Smith’s New Jersey Turnpike drive and Robert Morris’s 1962 performance cum sculpture Column, belong to art historical lore, handed down as transcribed oral accounts. Another vignette has, as its audio track, a 1964 interview with Frank Stella, Donald Judd, and Dan Flavin conducted by Bruce Glaser for WBAI radio, New York. For that vignette’s visuals, Byrne cast four actors who pose as the artists and interviewer in a period-style sound studio.

A fourth vignette, filmed in the Van Abbemuseum, Eindhoven, Holland, features iconic minimalist works from their collection. Works by Stella, Morris, Judd, Flavin, and Andre were selected and installed as minimalist period rooms per Byrne’s instruction. Brokered through conspicuously filmic machinations, it is a highly faceted vignette whose concerns are the transmission and mediation of Minimalism’s conceptual, historical, and museological underpinnings and implications. In addition, the vignette’s sequences shift between past and present with style of dress and comportment being the only clues as to whether a scene is meant to be taking place circa ‘09 or circa ‘69, leaving the time frame for those scenes void of people hopelessly indeterminate.

In two scenes featuring a dapper Dutch narrator, Byrne crafts a fictional scenario, using film to project over time and into our present Minimalism’s spatio-temporal tenets as espoused in the past. The narrator’s cigarette is an anachronism announcing a moment belonging in spirit to the era of Dutton’s anthologies. Clearly, the “new art” demanded a new narrator; yesteryear’s connoisseur has undergone a makeover. Gone are the pipe, tweed and hornrims. In one scene he quotes Donald Judd, citing the artist’s desire to break with a tradition of European art. In another scene, he speaks of the “Dreiklang,” the “triad” of object, viewer and space. More important than either of these points is his pompous air, legible as a dated convention requisite for any televisual discussion of art, new or old. It signifies the extent to which he is wholly absorbed by and in the moment from which he speaks; a point summed up in the deep drag he takes on his cigarette while standing before a Flavin.

To address the temporal conditions undergirding Minimalism more directly and as a subject unto itself, Byrne staged a reenactment of Robert Morris’s legendary 1962 performance cum sculpture work Column originally mounted at The Living Theater in New York. Morris developed the piece after having taken an interest in dance, wanting to replace dancers with objects representing basic positions such as rigidly standing or lying prostrate. For Column, Morris built a hollow plywood plinth measuring two feet square and eight feet high, which he painted gray. The plinth stood on a vacant stage in a vertical position for three-and-a-half minutes after which time it is toppled with the yank of a string whose one end is affixed to the plinth’s top and the other is held off stage by Morris. The plinth remained on the floor horizontally for the performance’s remaining three-and-a-half minutes. Though a simple event, Column held numerous implications for what could be said to constitute the aesthetic experience, particularly with regard to sculpture, admitting into the discussion notions of time and the body heretofore banished from a modernist rhetoric based exclusively on the eye. Byrne’s reenactment is brazenly dramatic, generating suspense through its emphasis on a ticking watch, a spotlight and a ripcord. 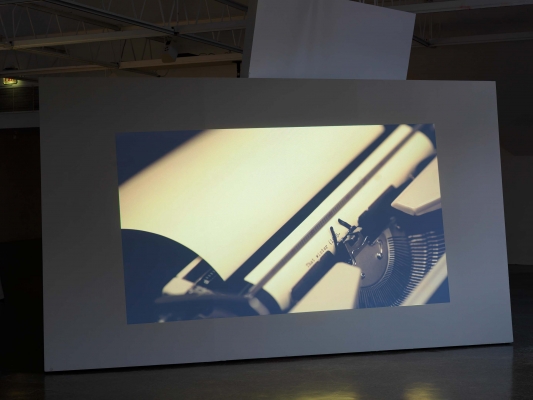 A thing is a hole in a thing it is not