Granted, it’s a polemical question, but what isn’t sculpture these days? In the wake of sculpture’s transition from pedestal to place, “to be or not to be” is indeed the question as sculpture can be any and everything, including nothing. Its paradigms, running the gamut from readymade to social practices, from institutional critique to earthworks, from assemblage to minimalism, are historically and ideologically overlapping, simultaneously complimentary and contradictory, making sculpture a hopelessly unwieldy category. Tattered and scattered, the once-upon-a-time discrete object has been dissolved in site-specific/installation practices and sculpture’s historical paradigms offer no solace. What does breathing life into inert materials mean in an era of mannequins? Likewise, the class of materials dubbed “noble,” bronze, marble and wood, have been reduced to flotsam and jetsam in a Euclidean space/time in which language, performance, video, and photography are as dense as any palpable form of matter. In this ever-expanding universe of artistic ways and means, all media potentially fall prey to the rubric of sculpture.

But being an artist who makes work qualifying as sculpture is one thing, while being a sculptor proper is arguably another. Rebecca Warren (b. 1965) is the latter. Her work is marked by the appropriation (a polite way of saying chewing up and spitting out) of a squarely object-based tradition. Hers is first and foremost a discipline- specific language whose object-centeredness trumps the categorizations of abstraction and figuration. The work operates within and partakes of the ecstasy of limits only to come again as sculpture for sculpture’s sake. In the face of her woman-handled hunks of polychromal joy, the vague figurative element, buttocks, breast, limb, emerging on occasion from a pedestal-based work, is neither here nor there relative to the clay’s registration of an unbound and urgent energy. Between these unfired clay works and her geometric abstractions, Warren’s Renaissance Society exhibition will be a very calculated ratio, some part funk-based ebullience to some part formal constructivist elegance.

Although the work has morphed stylistically, Warren is still guided by her initial impulse to work steadfastly within a tradition and yet do so in an exploratory, intuitive fashion. Accordingly, her current body of work is an extension of concerns stretching back several years to the two concurrent bodies of work for which she garnered international attention: the outlandishly playful, unfired clay female figures, and the vitrine works sparsely composed of mundane studio detritus. In tandem, they are reminiscent of a mind/body disparity in which the vitrines represent a disembodied, hermetic, and impoverished consciousness as per Samuel Beckett, while the clay figures, whose breasts, buttocks, hips, and thighs each appear to have heeded its own separate appetite, flaunt a carnivalesque excess as per Bahktin.

In their vulgarity and aggressiveness, the female figures pegged Warren as a latter- day bad girl of sorts. She is, no doubt, heir to a figuration reinstated by an earlier generation of women artists working under post-minimal auspices. Yet, in their hyperbole, Warren’s unfired clay figures could be read as a loving parody of this 1970?s feminism she was in fact trying to escape. As a result, the figure sculptures speak less to feminism than the appropriation of a tradition in wholesale need of a woman’s deconstructive touch. This includes its legacy of abstraction as well as figuration.

A year ago, in what appeared to be an about-face, Warren, just as she had produced a body of unapologetically figurative work several years earlier, produced a body of equally unabashed geometric abstractions that, in all their rectilinear glory, were exhibited under the title Feelings. Diametrically opposed to the unfired clay figures, this more recent body of precision-wrought, yet generic, stone and steel work fulfilled the ideological parameters of an abstraction seeking to achieve a universal, i.e. rational, expression. Historically, abstraction’s prohibition against representations of the body doubled as a means of silencing culturally specific voices, including those of women. Warren, however, challenges this aspect of abstraction through its wholehearted embrace, constructing bona fide specimens whose discrete objecthood, rendered at conspicuously human scale, bring them hopelessly within the sphere of the body, casting it in a figurative, and by default potentially feminine, light. To say nothing of the pompoms.

From this perspective, Warren did not appropriate a singular tradition, but two historically over-determined sculptural paradigms between which she continues to negotiate. Comprised of new unfired clay works and several steel geometric abstractions, Warren’s Renaissance Society exhibition is an extension of what has proven an increasingly deft navigation. The paradigm disparity between abstraction and figuration has been reinscribed into dialogue between form and antiform. Working through and within tradition, as opposed to against it, her goal is to keep her options open for the sake of singing the body eclectic. 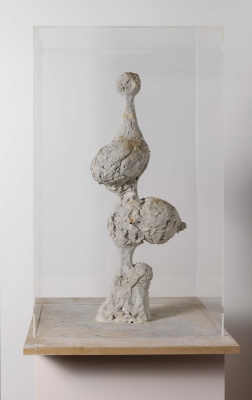