As for the history of illusionistic representation, cinema is a tough act to follow. In fact, painting’s foray into abstraction could be read as a deferral of an inevitable showdown with photography. By the time this occurred, the extent to which life had become saturated with mass media imagery was impossible to ignore. Painting’s traditional genres (landscape, still life, nude, portraiture) had been usurped by photography under auspices ranging from pornography to merchandising. Between a reactionary illustrative representation and an overblown Abstract Expressionism, painting was in a bubble whose options were wither or pop.

Andy Warhol began silkscreening photographic imagery onto his canvases in 1962. Warhol duly exploited two of silkscreening’s chief characteristics, namely its immediacy, and its capacity for repetition. He was fixated on both images of mass-produced consumer goods, and images as mass-produced consumer goods. Given his choice of subject matter, the correlates to his penchant for repetition were supermarket shelf and movie screen.

The ramifications of Warhol’s work were as important as his style. Brazenly embracing mass culture allowed for a critique of modernity without which contemporary art could hardly be said to be contemporary. Warhol can be credited with a freedom of thought and possibilities now taken for granted. If the debt future generations of artists owe Warhol is insurmountable, it is because his signature works confirmed a basic assertion, i.e., that we live in the age of film. Whether it is through the group of artists now referred to as The Pictures Generation (so named for Douglas Crimp’s seminal 1977 exhibition Pictures, which featured the likes of Cindy Sherman, Robert Longo, Jack Goldstein, Sherrie Levine, and Troy Brauntuch), or through a trajectory of painting from Gerhard Richter to Luc Tuymans, cinema has become an unquestionably legitimate subject for painting.

Based on Matt Saunders’ work, painting is capable of soliciting from cinema an uncanny dimension of cultural memory. In the age of film, cinema is at one and the same time a repository of its own history and a mirror of the 20th century. According to Saunders’ exhibition title, these histories are “parallel plots.” Saunders (b. 1977) is drawn to wayward filmographies, and the stars that populate his work can only be remembered after having been forgotten. This is a tacit precondition for cult figures: “discoveries” of under-recognized talents, and rediscoveries of once well-known actors and actresses who simply faded into oblivion. Saunders’ interests intersect with all of these. But rather than celebrate his stars’ overlooked or forgotten achievements, Saunders is fixated on their absences and the peripatetic reappearances that lend them the qualities of being ghosts.

Trained as a painter, Saunders’ process is a painting/photography hybrid whose final form is a photographic print. At their most basic, his works begin with small ink on Mylar sketches (4? x 5?) derived from film and television stills. These Mylar sketches are then used as negatives, either contact printed (laid directly on top of photo paper and then developed), or placed in an enlarger. As negatives, the Mylar sketches are done in reverse: those parts which appear lighter in the photograph are darker on the painted negative and vice versa. Some of the larger images are contact printed using a large sheet of Mylar to which Saunders has applied a variety of materials: oil paint, reflective metallic ink, cut paper, tape. Under a sheet of glass, the large Mylar sketch is placed directly on the photo paper which is then exposed and developed.

For Parallel Plot, Saunders has extended his material vocabulary to incorporate contact prints derived from paintings on canvas. Here, the Mylar sketch is replaced by a painting done on unprimed canvas. Functioning as a negative, the painting is placed onto photo paper and exposed to light, which shines through the canvas in a manner akin to an X-ray. Although the results are photographs, Saunders remains partial to painting. The surface of a photograph is simply a surface amongst others such as canvas and Mylar. In this body of work, Saunders has chosen surfaces suited to subjects whose images were in the form of projected light. In addition, the process is extremely painterly, which is to say empirical. Within the parameters of his process and subject matter, it remains a practice of making marks and seeing what happens.

In any case, the result is an expressionism of pure affect as the photographic process eliminates a painterly surface while retaining all of its gestural qualities. The Mylar sketch or painting is merely a medium through which the light needed to make the photograph passes. What the Mylar sketch or painting is is irrelevant to what it does. Whereas Walter Benjamin, in his seminal essay The Work of Art in the Age of Mechanical Reproduction, credited photography with destroying the “aura” imbued in the subject before the lens, Saunders is engaged in the obverse. His photographic process entails the production, not destruction, of an aura by shining light through a handmade negative. Fixed in photographic emulsion, his cinematic subjects are dredged up from an otherworldly, celluloid purgatory. In this respect, William Mumler and his late 19th century Spirit Photography brethren could claim Saunders as their progeny.

Saunders loves film. “To sustain an interest in what you’re doing, you have to work with things you love.” He is adamant, however, about not being a film buff. Anything beyond knowing that his sources are derived from films is extraneous to understanding and enjoying the work. For all the specificity of their origins, the renderings become vague solely by virtue of process rather than intent. Effect is entirely subordinate to Saunders’ inquiry into media imagery’s afterlife, “what the image has been through.” His source material’s claim to cultural memory resides in the recirculation of scenes, settings, poses, and expressions of an unspecified yet recognizable type embedded in our unconscious. It is less a question of whether or not we have seen specific images before, and more a question of the extent to which we are haunted by their general ethereal omnipresence.

Saunders admits his cinematic pantheon can sway toward the idiosyncratic. His work constantly flirts with the anecdotal. Liking a particular screen personage, however, is hardly reason enough to make them the subject of critique. His subjects also share filmographies that are riddled with absences, appearances, and reappearances, which cumulatively become an integral part of their personae. In Hertha Thiele’s case, her absences speak to a broader historical narrative.

Hertha Thiele (1908-1984) was a German actress from the Weimar period. Saunders’ interest in Thiele is in part a byproduct of living in Berlin where he has resided for seven years since completing his graduate studies at Yale. Thiele is an exemplary motif, one to which he has returned in serial fashion. Thiele is best remembered for her role in Maedchen in Uniform (1931), whose lesbian overtones have insured her cult status in perpetuity. While Saunders is no doubt fascinated by her roles, he is more interested in a screen presence whose sudden and long absence double as an account of the transition from the Third Reich to Cold War Germany. Thiele’s lack of allegiance to the Nazi party led to her being blacklisted in 1936. Thirty-five years later, she resurfaced on an East German television series. Her bout with minor fame led to a 1975 television documentary about her life, and a year before her death, a biography was published. Thiele was not only remembered for what she achieved, but also how, when, and why she was forgotten.

Parallel Plot contains three short animations. Already using film stills as source material, Saunders’ move into animation was a logical next step. Comprised of hundreds of scanned drawings, Saunders’ animations incorporate both positive and negative imagery to create a dynamic, high-contrast flicker effect. The technique Saunders employs is a basic version of rotoscoping, which involves tracing the image directly from a sequence of film stills. Invented by the Fleischer brothers, the creators of Popeye and Betty Boop, more recent examples of digital rotoscoping would be A Scanner Darkly (2006) and Waltz with Bashir (2008). Saunders chooses clips that resonate in his memory. He thinks of them as the loci of thought, mental note cards of sorts. Hence his titling one animation Passage Work, which is a nod to Walter Benjamin’s copious fragments of thought posthumously published as Passagen-Werk.

Passage Work is also to be read literally, referring to the labor of making an animation. Saunders’ process is highly empirical with no precise sense of how the end product will turn out. Tellingly, he structures his production less around a final result and more around time. Whereas the quantity of drawings may vary, the time spent making them does not. For example, he decides whether he will produce one or twenty drawings over the course of two hours. On the one hand, the vogue of animation in the sphere of the visual arts could be attributed to the rise of video and digital media. On the other, animation is also the conspicuous site of artisanal labor as defined through drawing. Hand-rendered animations such as those of Saunders and, say, Francis Al’s (Bolero in particular) are laborious in terms of the quantity of drawings necessary to produce a moving image. This quantity might dictate that craft be reduced to wage labor, an equation with time on the one hand and money on the other. Al’s case involves outsourcing, where the draughtsman’s hourly fee is the question. In Saunders’ case, however, it is how many drawings Saunders will produce per hour, which Warhol, in calling his studio the Factory, understood all too well.

In his choice of cinematic personages to render, Saunders’ casting sense is similar to that of Quentin Tarantino who has a knack for mining the blind spot of cultural memory. In the movie, Pulp Fiction, Tarantino not only gave John Travolta a new lease on life, but he somehow talked Samuel L. Jackson into sporting what was then the ne plus ultra of blind spot flotsam and jetsam, namely a Jheri-Curl. Both Saunders and Tarantino understand that an actor or actresses’ previous roles, absences, or life off-screen, can make for a palimpsest of under- and overtones that become a tacit part of a movie’s script. Cultural memory, in its guise as a cumulative repository of film personas, becomes an index of internal references to prior film credits. The result is a cinematic universe the equivalent of a Rotisserie Baseball League where an actor or actress’ performance is somewhat autonomous from the immediate movie plot being played out. This autonomy jogs our memory, producing a moment when role and actor are taken out of sync. In that temporal gap while watching a film or a television show, we ask ourselves, “Who is that person? Haven’t I seen them before?” Thus begins the ransacking of a cultural memory that is alternate to a reality-based memory, and parallel in the sense that it runs in a time perhaps no less real than that of our lives and indeed history. This conjecture doubles as an argument that our memories are a pastiche of fact and fiction. Based on Saunders’ work, this state of affairs does not make memory any less rich a source for the imagination. If anything, our memories have been enriched by this abundance of additional image fodder in which reside ciphers of a collective unconscious. 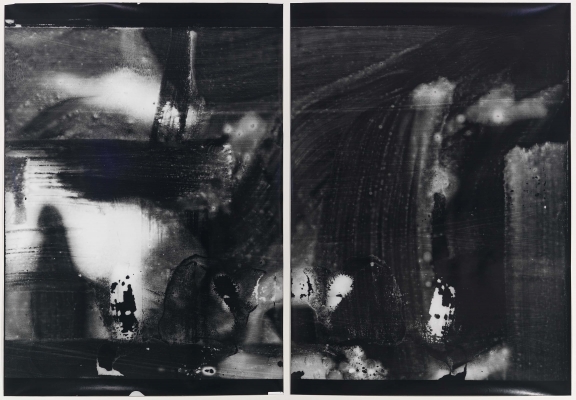