Chicago-based painter Jim Lutes (b. 1955) grew up in central Washington State. His father was an auto mechanic and his mother was a clerk working for the Hanford Nuclear Reservation, a now decommissioned nuclear production facility built to enrich plutonium for the Manhattan Project. Lutes discovered art in high school.

It was his English teacher, doubling as the school’s art teacher, who encouraged Lutes by giving him oil paints and access to art magazines. Lutes recalls being spellbound by a reproduction of an Ed Ruscha painting of a Standard Oil gas station. While there was an immediate affinity for Ruscha’s clear, linear graphic, of greater importance, Standard Oil was his father’s place of employment. “Here was a piece of my world boldly illustrated in art.”

Lutes enrolled in Washington State University, Pullman, where he would work with painters Andy Hoffmeister and Gaylen Hansen. Hansen, who was associated with the West Coast Funk school, imparted to Lutes a bent for idiosyncratic and personal narrative to the extent that subject matter was privileged over technique. As Lutes recalls, “Gaylen used to say the idea in a painting should be so good it could be painted badly,” which is an apt description of Death and the Bulldog (1982), whose directness of style and storyline are clearly indebted to Hansen. Although Hansen’s influence on Lutes would be reinforced by a figuration waxing throughout the 1970s, Lutes could still feel the tug of a waning abstraction. It was through Hoffmeister that Lutes would become familiar with a Northwest Coast brand of abstraction minted by none other than Mark Tobey whose calligraphic “white writing” remains an influence on Lutes’ recent work.

After graduating in 1978 and before coming to Chicago in 1980 for graduate studies at The School of the Art Institute, Lutes did a two-year stint as a teamster in Seattle handling freight for Reynolds Aluminum and Leslie Salt. However brief, his Seattle hiatus was important insofar as he considers himself to have been formed as an artist prior to his arrival in Chicago. It was also important to Lutes because of The Seattle Art Museum’s considerable holdings of work by Tobey. Too shy to make inroads with Seattle’s artistic community, Lutes was nonetheless headstrong in his painterly pursuits, confidently staking a claim in the swampy morass between the terra firma of figuration and the sea of abstraction, a position for which sustained contact with Tobey’s work would have been key.

Lutes’ first mature body of work coincided with his move to a loft at 1360 North Milwaukee Avenue in 1981. Like many of Chicago’s other central, neighborhood business districts, this stretch, with its remnants of Lawrence Welk-era signage for beauty supplies, liquor stores and layaway plans, had seen better days. Once referred to as the Polish Downtown, this strip served the immediate Northwest side settlement community. It was also Nelson Algren’s infamous stomping grounds. But by the time Lutes arrived on the scene, what Algren pegged as a neon wilderness was for Lutes a neo-neon wilderness, or a neon neo-wilderness, with a sparser demographic made up of old timers, younger Latino immigrant families, general ne’er-do-wells, and last but not least Lutes’ bohemian brethren who would be gentrification’s bellwethers. Evening of My Disfunction (1985) is iconic of the period. In and of itself, its pitifully monstrous, one-legged protagonist is a plenty scary but nonetheless sad entity. The flaccid, diminutive phallus, combined with the gravity-laden bent of its belly are cues well in excess of male sexual tragedy. Framed within a bare-bones-living loft space overlooking the city, it corresponds more to a post-industrial malaise well beyond Viagra’s assistance.

Although figurative, Evening of My Disfunction, like other paintings from this period began as an abstraction similar to his now signature accumulation of arabesque marks. From these, Lutes would tease out a biomorphic form to which he would lend full or partial human anatomy. After developing the figure, Lutes would then construct the context giving the painting a storyline. In this respect, despite the figurative results, the process was a classical abstractionist approach of working without a preconceived idea but finding form through an improvised process of trial and error. Tellingly, Lutes considers Big Guy (2006) a latter day corollary to Evening of My Disfunction.

Lutes’ career was launched on winds favoring neo-expressionism. After a sold out, 1985, premiere solo show at Chicago’s Dart Gallery, inclusion in the 1985 Corcoran Biennial and the 1987 Whitney Biennial, New York beckoned. Heeding its call, Lutes moved there in the winter of 1987. Unable to ingratiate himself to a commercial gallery world in the throes of megalomania, Lutes returned to Chicago in 1988, going into what he described as “internal exile.” Relocating his studio to the southwest side, he would put the Milwaukee Avenue period behind him. With its gutter-gazing protagonist, Crisis on Red Street (1988) is an archetypal early work. Yet, this belly-eyed, sausage-shaped sack of pure, painterly protoplasm would also prove gravid with the paintings that were to come.

Lutes’ stylistic development hardly follows an evolutionary model. It is better characterized as lava lamp-like where figuration and abstraction coexist in varying degrees of discreteness and in the absence of any tension. This makes plotting Lutes’ stylistic development in terms of figuration versus abstraction misleading. Lutes never got rid of the figure; he merely substituted it with an accumulation of garish strokes whose complex interplay perhaps only string theory could describe. This is particularly the case in a run of paintings executed in 1990, Pucker Bulbous and He Should Have Called being prime examples. While his decision to forego corporeal illustration in favor of a meandering arabesque may have looked like a big shift, for him it was no shift at all. More important than any seeming stylistic shift circa 1990 was his introduction to acrylic paints, which happened in New York. Acrylic paints account for the change in palette from earthy and dark to joyfully synthetic, and the change in line quality from halting, awkward and abrupt to lyrical.

With a more forgiving suspension medium, acrylics allowed Lutes to apply his calligraphic drawing style to painting. Upon sorting, distilling, and transposing marks from his drawings into his painting, Lutes was forced to reassess the relationship between figure and ground, a relationship which heretofore had been one in which the figure was hopelessly dissolved in the ground and vice versa. In a series of paintings from 1995, Lutes radically separated the gestural content from its setting by superimposing a spare, open weave of arabesques on top of illusionistically rendered scenes painted after television stills that were randomly captured on a computer. Taken from a crime scene photo (He Just Snapped) and a grade B film noir movie (Early Release), the backdrop in these paintings are mise en scene for his marks, “a place for something else to happen.” With respect to the arabesques, Lutes purposefully painted his own drawn marks with a degree of simulation that would render them, in his words, “signs of marks rather than actual marks.” This mannerist redux, combined with the use of appropriated imagery would result in a brand of post-modernism squarely Lutes’ own, his “own private post-modernism” so to speak. This strategy ultimately touches upon the humility with which Lutes reconciles quotidian life and so-called larger theoretical concerns and international trends.

1992 marked Lutes’ inclusion in Documenta IX, curated by Jan Hoet. For all its prestige, Lutes’ inclusion provoked the most stringent reflection upon his career thus far. As for success measured as beyond hand to mouth living, Lutes recalls thinking at the time, “This is it. This is as far as I can go. If I can’t make it happen from here, then it won’t happen at all.” Unable to convert international recognition into a means to pay the bills, Lutes harshly refers to the period immediately following Documenta as a moment his “career stumbled.” That assessment, however, would have to be tempered by the discrepancy between a career path defined by resume line items versus one of artistic development determined as a matter of course that is strictly its own. Based on Lutes’ initial success, he would be the first to characterize his story as one of adversity in the face of triumph. His bouts negotiating the slings and arrows of regional, national and international recognition, however, are secondary to the story told by the paintings themselves. The “stumble” to which Lutes refers was actually a moment of sober resignation in disguise, in which case, it was actually the beginning of his career. This, however, would predate the true beginning of his career, which in the logic of this argument began in 1998 with the use of tempera glazing techniques.

Since his 1998 return to Chicago, after four years heading the painting department at Illinois State University, Bloomington-Normal, Lutes has been tenured faculty at The School of the Art Institute where he teaches materials and methods. Not exactly an old dog, Lutes ironically taught himself a new trick. As was the case with acrylic, the use of tempera also resulted in a more languorous stroke, with the added bonus being translucency. Although building form would require more marks, the paintings are far richer than those of their predecessors, this despite a more subdued palette. Most remarkable, however, is the radical change in tenor to have occurred without the paintings undergoing a stylistic makeover. The tempera has yielded an ethereal quality that is less expressionistic and more psychological, capturing a state of mind for which doubt and uncertainty serve as the basis of thought cum reflection. They are arguably the same paintings he produced at the outset of his career, only now operating under the rubric of self-reflexivity. As such, Lutes is now able to use them as a mirror. Not only do these paintings question their own origins and being (where, when, and how do they begin or end?), Lutes is using them to ask himself those very questions. This explains his recent turn to using photographs of a personal nature as source material in his work. Although not in the exhibition, Dear Young Dad (2006) for example, features a portrait of a young Lutes senior. In a similar vein is Zaagmolenstraat (2006) whose backdrop is a view of the tenement-lined street where De Kooning was raised.

Because of its hackneyed nature, a brazen homage to De Kooning warrants suspicion if not outright prohibition. Yet, no subject has ever been beyond or off limits to Lutes. As his “own private post-modernism” signals, Lutes, on his own terms, can arrive at a place where he is of the world no matter where he is in the world. Just as his work literally speaks of his immediate surroundings, be they studio or living room, home or street, his work also speaks of the world’s place in him. This not only includes his sentiments regarding De Kooning, but Chicago as well. In this respect, having arrived at the beginning of his career, which is to say a point where he has acquired the technical means to make the paintings he has wanted to make since he started, Lutes is by all means a Chicago artist. Indeed, given the importance that tempera has played in this capacity, we can truly say he got his start here. This is a far cry from using the designation “Chicago artist” stylistically where it refers to the passing on of a tradition. It is also not so generic as to simply be a geographic designation. In this specific instance, it refers to a painter who from his perch in Chicago continues to critically negotiate coming into his own on his own, in other words, a painter on the make. 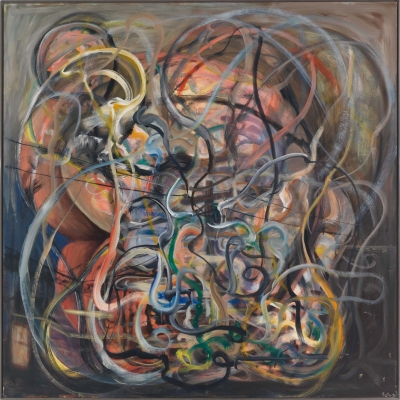