“The Scramble for Africa” refers to a period in late 19th Century world affairs when Africa’s interior was feverishly carved up by European imperialist expansion. The British, the Portuguese, the French, and last but not least the Belgians, whose infamous atrocities remain deep and dark enough to absorb whatever light is shed on them, were fierce rivals in gaining access to the Congo’s vast mineral riches. Lacking all dignity in the fight for natural resources, what posed as civilization was a barbaric episode Joseph Conrad was none too shy in describing as “the vilest scramble for loot that ever disfigured the history of human conscience.” Told from the vantage point of the Congo, modernity is anything but a narrative of moral progress.

In 1960, within weeks of having been liberated from Belgian rule, the Democratic Republic of Congo was beset by political disintegration. Its two most diamond-rich provinces seceded when the central government lost control of a mutinous and factionalized military. The United Nations then spent five years piecing the region back together, at which point a pattern endemic to the Cold War emerged; military commander Mobutu Sese Seko installed himself as a dictator with the blessings of Europe and the United States. During a brutal thirty-two year reign, he amassed a net worth in the billions of dollars, while the country, with its colonial infrastructure left to rot, was driven into extreme poverty. He was deposed in 1996 by Laurent Kabila, who led a successful coup with military support from Rwanda, Uganda and Angola. In the wake of Mobutu’s ouster, the military coalition fell apart and the country collapsed into a de facto civil war that continues into the present. Scattered throughout the country, enough mineral riches are in the hands of armed brigands to securely finance a now decade-long conflict with a death toll estimated at 4 million.

The subject of Gravesend, a new short by British filmmaker Steve McQueen (b. 1969), is coltan, a mineral so valuable it is the new blood diamond. Short for colombite-tantalite, coltan is an ore rich in tantalum, a metal used in capacitors found in a host of computer driven electronics. As a result, coltan’s price on the open market has surged some tenfold within the past decade. Eighty percent of the world’s supply comes from the eastern region of the Democratic Republic of Congo, many of whose mines are in the hands of Rwandan rebels. There is no incentive to end what for them is a lucrative conflict, as the demand for coltan continues unabated, and indeed, abetted by the craze for the latest model cell phone or gaming console. Cropping up in the headlines, the conflict, while in and of itself tragic, symbolizes a history far from healed, as our global economic order is unable to dissociate itself from a blood-soaked, imperialist predecessor.

Coltan’s is a tall story to tell. Relative to a topic teeming with documentaries, McQueen’s approach is unapologetically abstract. Compressed within 17 minutes is a meditation on empire and the fascinating portrait of an ore. Shot on 35 mm film, and decidedly non-narrative, Gravesend is structured around a series of radical leaps in location, modes of thought, and mood. Like a musical composition, it consists of movements varying in tempo. The mainstays of its footage are bouts of realism alternately broken by a fast-paced, but lyrical, abstract animation aerially tracking the Congo River, and a slow time-lapsed dissolve that is a somber reflection on empire.

Gravesend makes its most radical leap in the opening sequences, boldly juxtaposing images of coltan’s other worldly refinement with its all too earthly origins. These states of matter are worlds apart, and save for that which is strictly visual, Gravesend is resolutely purged of information illustrating any causal economic links in between. From a high-tech refinery more believable as something from a James Bond film, to a wild and fecund jungle interior, it is not only a question of where these scenes are occurring, but when. Between polar extremes, the net effect is a present moment understood as thoroughly heterogeneous, an uneven mixture of a pre-modern past of pick-axe and shovels, and a future ideal in which imperial power has effervesced into the “invisible hand” of supply and demand.

As for illustrating the global political economy, coltan is a lesson in historical materialism if ever there were one. In it lies the web of relations tying advanced industrialized nations to the remotest hand-to-mouth economies. It is easy to say people, and not coltan, are to blame for the Congo’s woes. To be nearer coltan’s source, however, is to be no closer to a culprit. Since the prospectors are isolated from a larger context, we do not know if the coltan is being mined ethically, let alone lawfully. In either case, their labor undergirds an economy that appears to have its origins in a finders-keepers free- for-all. For them, labor is labor whether its fruits matriculate into a legitimate or an illegitimate economy. This point perhaps supersedes the question of the prospecting’s legitimacy (and by extension, the economy built upon it) as incumbent on the ethical awareness of prospectors whom McQueen has portrayed as neither victims nor aggressors. Indictment is deflected away from their agency and toward a larger economic system where blame is ultimately circular.

Gravesend takes its name from a town in Kent, England. Located on the south bank of the Thames, it was from Gravesend that Marlow, the protagonist of Joseph Conrad’s Heart of Darkness, set sail for the Congo. The time-lapsed footage of the sun setting over a harbor skyline punctuated by smokestacks renders, as if verbatim, the foreboding melancholy established in the opening pages of Heart of Darkness:

A haze rested on the low shores that ran out to sea in vanishing flatness. The air was dark above Gravesend, and farther back still seemed condensed into a mournful gloom, brooding motionless over the biggest, and the greatest, town on earth. And at last, in its curved and imperceptible fall, the sun sank low, and from glowing white changed to a dull red without rays and without heat, as if about to go out suddenly, stricken to death by the touch of that gloom brooding over a crowd of men. Forthwith a change came over the waters, and the serenity became less brilliant but more profound. The old river in its broad reach rested unruffled at the decline of day, after ages of good service done to the race that peopled its banks, spread out in the tranquil dignity of a waterway leading to the uttermost ends of the earth.

For all of Conrad’s eloquence, the phrase that more readily comes to mind is “The sun never sets on the British empire.” McQueen’s sunset, while graphically illustrating the historical twilight of empire’s formal political structures, is also rhetorical, questioning the very pastness of the past. Did the sun set on the British empire? Did empire come to an end? McQueen’s conspicuous lingering over a sunset makes this sequence an allegory unto itself. Preceded by an image of coltan prospecting in which the end of a shovel rhythmically emerges from a grave-sized pit that is anything but shallow, this rhetorical question begs reframing. Are we ready to bury empire? More to the point, does emphasizing empire’s end obscure an exploitation that is historically uninterrupted, as the West, still dependent on its former colonies, perpetuates gross iniquity now accompanied by internecine conflict?

Over and above any socio-economic and political machinations, Gravesend favors discreet outward appearances. For McQueen, the facts of the matter are visual and visual alone as Gravesend’s stunning production values attest. He insists that Gravesend “first and foremost is about looking,” even at the expense of knowing what we are observing. Textual footholds are dismissed; no maps, no dialogue, no villains, and no experts. There is nothing to indicate or verify the setting is the Congo nor the nature of substances before the lens. Although precise and highly specific in bearing towards a subject better known through journalism, Gravesend steadfastly refuses to inform in that manner, opting instead to extract visually from its subject generalities that ultimately function allegorically. Unflinchingly direct, Gravesend’s camerawork is a brazen species of realism. A sequence featuring a close-up of severely weathered hands hammering at stones, picking out black morsels of coltan, is without doubt the direct descendant of Gustave Corbet’s 1849 realist masterpiece The Stone Breakers, only now it is accompanied by the dull thud of striking pay dirt.

Gravesend does not trace the fate of a valuable ore from extraction to refinement. Nor do the worlds these states of matter represent collide. They are not only connected, but interdependent, part of an equation that accommodates their profound incommen-surability. While its unembellished footage brings it into a discursive relationship with documentary and other forms of reportage, Gravesend above all else is a poem, and an epic one at that. Strikingly beautiful, and supremely ambitious, it is a highly formal meditation that speaks by looking. Paired with Unexploded, whose footage of damage wrought by an unexploded bomb was taken by the artist in Basra, Iraq, it becomes clear that McQueen is composing with elements from the here and now. Decisively unsentimental in their depiction of contemporary life, these works make all the clearer that as the ring tone tolls for one, it tolls for all. 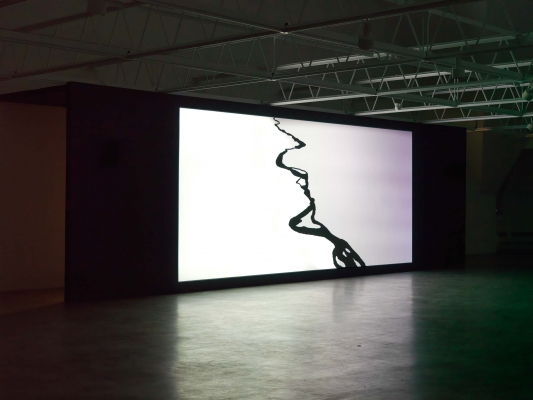