Framed as a quest, the history of modern painting is a turbulent narrative. The holy grail in this instance is the essence of painting, i.e., those properties defining painting as an autonomous discipline, a purely aesthetic activity free from all worldly constraints, something made exclusively to be looked at. If the quest were whittled down to a single, fundamental property, it would be pure color. From Impressionism to the Washington Color School, the liberation of color came about in stages that, told in another fashion, can be understood as the dismantling of a hard won mastery of illusionistic representation.

Yet the advent of abstraction hardly marked the triumph of color. Painting, in the early part of the Twentieth Century, was dominated by cubism and its attendant debates over form, specifically the rendering of three dimensional form on to the picture plane in a way that would maintain an integrity to the picture plane’s flatness. Even though Fauvism was an alternative to cubism, color, no matter how key an element in, say, Matisse’s paintings, was still subordinate to line and shape. Although the question was on the table as to whether color, in and of itself, could determine a painting’s structure, in order for the primacy of color to assert itself, form, composition, and, last but not least paint handling, as it had been lionized by De Kooning and Pollock, would have to follow in the footsteps of illusionistic representation and be eliminated from the picture. In this regard, Color Field painting came at the tail end of a dialectic characterized by a series of sacrifices each of which seemed like a threat to painting’s continued development. But after tossing out the baby and bathwater, why keep the bathtub of stretcher bars and canvas? While developments in post Color Field painting, notably the work of the French group Support/Surface, Sam Gilliam and Lynda Benglis would problematize painting’s means of support, with the exception of Niele Toroni, its sustained abandonment was out of the question.

Katharina Grosse’s site-specific paintings/installations are a phoenix from the ashes of late modernism. Since 1998 Grosse has been using a compressed air spray gun to apply garish swaths and splashes of undulating color directly to gallery walls with sublimely spectacular results. Whether wild or discreet, her installations append themselves to modernist painting’s Greenbergian cul de sac in an uncanny manner that is the better part of their beauty. To use Freud’s language, if the primacy of color can be characterized as a “latent” rather than “manifest” objective in the development of modern painting, then it is fair to speak of color as repressed. Read through her work, what passed for the liberation of color would seem little more than color’s continued repression so long as painting was unwilling to do away with the means of support that defines the historical trajectory of easel painting. In other words, this traditional means of support functioned as painting’s ego, representing all a painting could know of itself as contained within the edges of the stretched canvas. Knowing no such boundaries, Grosse’s installations are modernist painting’s unruly id.

Grosse is forever in Jules Olitski’s debt. He was the first painter to regularly use a spray gun. Regarding Olitski’s use of the spray gun, Greenberg wrote, “the grainy surface Olitski creates with his way of spraying is a new kind of paint surface. It offers tactile associations hitherto foreign, more or less, to picture-making; and it does new things with color. Together with color, it contrives an illusion of depth back to the picture’s surface; it is as if that surface, in all its literalness, were enlarged to contain a world of color and light differentiations impossible to flatness but which yet manages not to violate flatness.” Grosse’s palette is too saturated to achieve the illusion of depth of which Greenberg writes. That is not her goal. If anything, for an illusion of depth she has substituted the actual architectural space in which the work is sited. Paradoxically, Grosse’s work often obliterates the corners where walls and ceiling meet, forcing architecture to succumb to the flat space of painting.

Beyond reveling in the primacy of color and Olitski’s precedent-setting use of the spray gun, Grosse’s work quickly distances itself from Color Field painting. This is even more the case when Grosse spray paints over various objects’ furniture, clothing, mounds of earth, a tactic incorporated into her work a few years after the first spray gun installation. While the strictly painterly works are capable of an astounding range of expression based exclusively on color and gesture, the works including objects introduce a narrative element bringing wholly fresh facets of modernist painting, from Surrealism to Rauschenberg’s Combines, within her sphere of reference. In any case, however, Grosse’s use of color is such that it is no longer an attribute subordinate to the sum total of properties that make up our perception of an object. It is neither the color of a substance nor the color of a surface but color as its own substance acting independently of the surfaces to which it is applied. Just as her work extends a logic in which color was reified within painting only to be altogether reified from painting, in the works incorporating objects, color is wholly reified from things in order to question what and how we see in a more general fashion. In other words, Grosse’s work isn’t merely about reified color, it is ultimately about reified vision, one freed from utilitarian ends to an extent and in a manner that makes it hard to imagine the liberation of vision on terms other than those of color run rampant.

Needless to say, Grosse’s use of the spray gun brings her work into direct dialogue with graffiti in terms of spray paint’s “tactile associations” which at the time of the above quote from Greenberg were “hitherto foreign, more or less, to picture-making.” This is certainly no longer the case as graffiti has been brought well into the fold of easel painting’s repertoire of styles from, say, Twombly to Basquiat. Of greater importance with regard to graffiti is the performative aspect of Grosse’s work. Her projects, surveyed one to the next, read as the work of a tagger, a stylistically explicit statement to the effect of “Katharina Grosse Was Here.” Within the flux of their formlessness, Grosse’s moves, like those of a surfer or skateboarder, are best described in the diminutive of radical, i.e., as “rad.” Under the aegis of pure color, however, her work is anything but a form of writing as is graffiti. Grosse’s color is a form of non sense in the best and truest sense. The work ascribes less to a logic and more to a psychology of color where it is more about the perceiver than the perceived; color as a subjectively irreducible experience. To borrow a quote from The Meaning of Art, a 1940 lecture by Josef Albers: “Art is concerned with something that cannot be explained by words or literal description…art is revelation instead of information, expression instead of description, creation instead of imitation or repetition…Art is concerned with the HOW, not the WHAT; not the literal content, but the performance of factual content. The performance - how it is done? That is the content of art.”

For Albers, as with Grosse, color is an itch theory could never fully scratch. All the so-called laws of color are subject to interpretation as borne out in each and every individual painting. As Homage to the Square, Albers’ monumental series of color studies begun in 1950 and continued through to his death in 1976, serves to prove, color is an empirically driven area of endless experimentation. A mere two blocks from the site of the first self-sustaining nuclear chain reaction, Atoms Inside Balloons, Grosse’s Renaissance Society exhibition, is also a response to the gallery’s 30 foot high, neo-gothic ceiling. As with all of Grosse’s work, Atoms Inside Balloons is in line with Greenberg’s assessment that “Modernist art belongs to the same specific cultural tendency as modern science.” And within a history of modernist painting characterized as an evolution towards its own self-truth, Grosse is indeed a free radical. 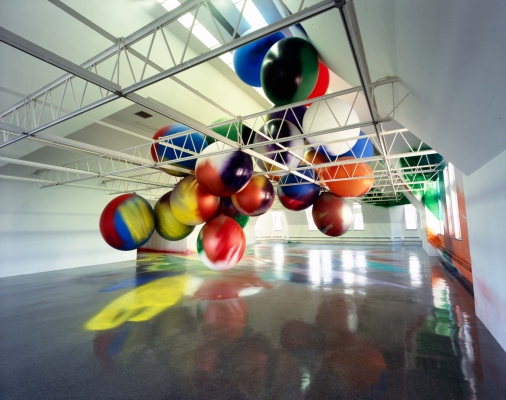