Mechanical Reproduction in the Age of the Work of Art

“Since Hegel the prophecy of the end of art has more often been a component of cultural philosophy that pronounces its judgment from on high than an element of actual artistic experience; in decrees totalitarian measures were prepared. The situation has, however, always looked different from within art. The Beckettian zero point-the last straw for a howling philosophy of culture- is, like the atom, infinitely full.”
—Theodor Adorno, Aesthetic Theory

Since the publication of The Work of Art in the Age of Mechanical Reproduction in 1936 there has been no end to the examples one could choose to affirm, elaborate, or refute Walter Benjamin’s arguments. Finding an artist for whom some aspect of that essay is not relevant proves a challenge. Were such an essay written today it would be accountable to nothing short of the whole of Twentieth Century art history, which is why it is the staple of so many a syllabus. Anything but reducible to a singular argument, it remains a Pandora’s Box for students and instructors alike. It is a sweeping framework for the evolution of those things and activities we call art. As a Marxist critic, Benjamin believed the struggle between opposing class interests was the dialectical force driving history and by default the development of cultural forms. Theorizing art’s trajectory from its anthropological origins in ritual up and into modernity, the essay does not describe the future as much as it is a blueprint for a past made retroactively accountable for the rise of Fascism.

For Benjamin, cinema was modernity’s supreme cultural achievement. Its invention announced a chapter in history belonging to the proletariat whose likeness would be reflected in mass media’s promise of collective reception. This speculation, however, was at the cost of the traditional fine arts, painting in particular. With constraints antithetical to a “simultaneous collective experience,” painting would be denied dialectical development beyond its having achieved autonomy, an autonomy that for Benjamin corresponded directly to a decline in painting’s social significance. At best, such autonomy, culminating in abstraction, would serve as an inverse corollary to the public’s reception of film. In Benjamin’s words, “The reactionary attitude toward a Picasso painting changes into the progressive reaction toward a Chaplin movie.” Although the fine arts and mass media art forms would be locked in dialectical tension with one another, film, through its engagement with the masses would continue to thrive and develop, while painting would not.

Benjamin’s scheme substantially discounts painting’s own turbulent dialectic beginning with the mid-Nineteenth Century cry of art for art’s sake and ending in the latter part of the Twentieth Century. While the series of developments from Impressionism through Pop Art runs parallel to Benjamin’s broad historical trajectory, “the situation,” to use Adorno’s words, “has always looked different from within art.” Painting’s autonomy became the basis for it to reflect on its own condition including its relationship to mass media, which it did in ever more explicit fashion after World War II. Following abstract expressionism’s recapitulation of painting’s autonomy, Pop Art would sanction mass media-based subject matter within painting to an extent that would exhaust any and all dialectical tension between high and low. Although one could continue Benjamin’s inquiry as to the work of art in the age of mechanical reproduction, from our current historical vantage point one could also speak of mechanical reproduction in the age of the autonomous work of art.

Scott Short’s paintings are fiercely autonomous, freed from the obligation to be about anything other than looking. Working within a restricted visual economy, Short is something of a monk devoted solely to the production of an image accountable to nothing other than itself. He has a simple and highly refined method for generating compositions. He makes black and white photocopies of a sheet of colored construction paper, and then makes a copy of a copy of a copy of a copy etc. until the results are a couple hundred times removed from the original. From these, Short selects a page that he photographs in slide form. He then projects the slide onto a stretched canvas and painstakingly reproduces the image as a painting.

The selection of which images to paint is purely subjective in that Short has no criteria other than effects he finds of visual interest, effects displaying the photocopier’s translation of color into a grayscale that subsequently breaks down into patterns of black and white. Within a dozen copies, the copier’s logic becomes exclusively its own as the degradation is significant enough to dissolve any semblance to the original. The changes over a succession of several dozen photocopies are a magnification of minor flaws and irregularities that are amplified through progression. As with feedback, the results take on a life of their own with no recourse to their source.

After selecting the image, Short’s paintings become strictly procedural. In this regard, he is a “machine in the studio,” a copier so to speak with a photocopy becoming that bearer of “authenticity” par excellence, a painting. “Aura” is produced through the labor of painting, a labor that Benjamin by way of analogy (painter is to witch doctor as cinematographer is to surgeon) relegated to a witch doctor’s magic. But despite its labor intensiveness, the procedural aspect of Short’s paintings is subordinate to their effect. Above all else, Short’s paintings are Abstractions with a capital “A” even if under the auspices of being an immaculately executed copy. Although it is the photocopier that performs the labor of abstracting, once the photocopies have undergone a shift in scale so as to be painted the imagery becomes as retinally action-packed as any abstract painting could ever hope to be.

The aura of Short’s paintings is not garnered through the labor of producing a unique and therefore authentic art object as much as it is garnered through the phenomenology of viewing. Whether they consist of a singular, large black form looming in from the edges, as do the two largest paintings in the exhibition, or their marks are distributed across the picture plane so as to create a more homogeneous field of static, Short’s paintings are a wealth of visual effect in which value, arrived at through the textural interplay of black and white, becomes as rich and complex a phenomenon as color itself. This is particularly the case when the paintings are seen in number as the eye adjusts from one painting to the next, from a static so lush and dense as to be of tropical proportion, to a barely perceptible collection of specks dispersed over what is an all consuming tundra of white. But just as soon as they are a species of pure abstraction as Greenberg would have acknowledged it, the fact that Short is dedicated to copying makes his paintings the keepers of their own dialectic in which roles become reversed. Short’s manual labor, by following precisely in the footsteps of the machine, allows the copy to become an original, and the abstract to lay claim to being strictly representational.

Although the visual impact of Short’s paintings can be likened to, say, the all-over paintings of Jackson Pollock, their expressive qualities are squarely a product of the image and not of Short’s paint handling, which as it turns out is as fastidious as that of Roy Lichtenstein. Diametrically opposed to painterly virtuosity as defined by action-painting, Short’s work can nonetheless lay claim to being “painter’s paintings” in the sense that their meticulous graphic quality doubles as a sign for painting, an autonomous painting to be precise, in the same way as Lichtenstein’s paintings of brush strokes. In this regard, Short’s paintings are conceptual paintings, conceptual in that the sign for painting is being invoked by way of an exquisitely crafted image whose subject matter (a black and white photocopy of a monochrome piece of paper) and execution (the copying of a copy) further reduces the already reductivist logic on which the discipline of painting most prides itself. As several of the earlier works in the exhibition, including the one reproduced on this side of the poster, make clear, Short did not arrive at what is now a signature body of work through a search for subject matter but through an obliteration of subject matter. All that remains, as a referent in the later work is a monochrome piece of paper stripped of a color that was its sole quality. Less than empty, his paintings are infinitely reductive. Confronted with the most rote form of mechanical reproduction, namely the Xerox copy, these paintings have retreated into a realm of “negative dialectics” where, as the product of an austere but resolved practice, they become even more stalwart in their bearing. To put it bluntly, these paintings have been mothered by fire, the fire being an inextinguishable and existential doubt about why and what to paint. As Short stated, “anyone making paintings is confronted with the decision to quit.” But why quit when there is so much to do and nothing to lose.

For the moment, as pluralism seems to rule the roost, painting is more a collection of styles rather than being driven by any overarching dialectic. Indeed Short’s paintings are neither thesis nor antithesis but more an elegant synthesis of the strategies and dilemmas defining the discipline between the monumental movements of Abstract Expressionism and Conceptual Art. Choosing to revive only to resolve an all but abandoned dialectic amounts to taking two steps back and three steps forward. Although Short likens painting to the myth of Sisyphus, I would argue this is too heroic a description, at least for his own practice, which is defined by its restraint and refinement. Short’s work doesn’t exude the sweat associated with the arduous task of rolling a rock up a hill. Instead, it perseveres with singular focus in the face of a daunting number of possibilities, which, all the way down to a speck of toner, remain infinitely full. 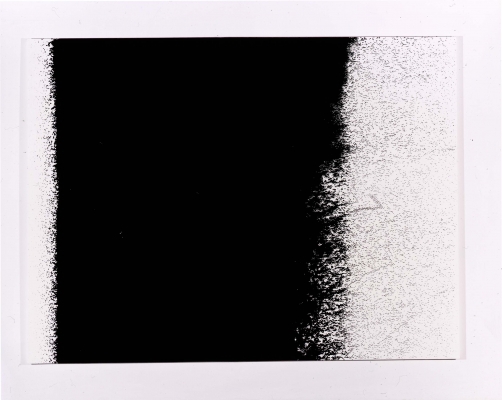