Being required to carry identification means we are never without a picture of ourselves. When asked, we present a small card featuring a photographic likeness whose caption is our name. This tacitly authenticates our presence. We own our physiognomies and our physiognomies own us. Genetics is not as much a logic as it is a lottery governed by the probabilities and permutations of physical traits that in their unique combinations define us as individuals. But our bodies, in all their particularities, are only the discreet portion of what comprises the self, which is forever a vague alloy irreducible to neither a psychological or physical component. The union of ego with one’s image, or “mirror stage,” as it is referred to in psychoanalysis, is a milestone in personality formation. But by the time of our first government issued photo ID the “mirror stage” has been fleshed out by layers of formative experience becoming a mask without which it is impossible to speak of self.

When are we at home with ourselves? Or more precisely, when are we at home in ourselves? Photographer Ben Gest is not as interested in the self as he is its inhabitance. Gest captures his sitters at the chance interstices of deep reflection when the self dwells more in thought than in physiognomy. Although formally dressed, his sitters are photographed at highly informal moments performing simple, perfunctory actions: filing; lunching in the work place; putting a sleepy child to bed; walking along the beach; or retrieving the trash can lid before facing the morning commute. Gest’s sitters never acknowledge the presence of another person let alone a photographer. Less than blank, their demeanor suggests that the psyche has vacated the body’s premises. Psychologically disengaged from either the task at hand or the company of others, they are irrevocably alone.

Gest uses digital photography to monumentalize photography’s ability to capture the fleeting moment. Printed at roughly four by six feet, each of Gest’s photographs is a seamless combination of dozens of digital images of the sitter and their immediate environ giving Gest control over all details. Their appearance as straightforward photographs, however, can only be maintained at a cursory glance as the subtle and not so subtle exaggerations of proportion and perspective quickly betray the photographs as mannerist constructions. For Gest, however, digital photography is a tool for assembling an image from lots of images of the same scene, as opposed to manipulating an image through the elimination or addition of elements that were not there to begin with. The images are skewed but not enough to question them as a palpable reality. As a result, they solicit a gaze which does not so much move around as it does in and out of the photograph, recapitulating the camera’s depth of field, slowing down an otherwise fast reading. What appeared to be a seamless moment breaks down into a composition whose parts are in varying degrees of focus. This notable conflation of the human eye and mechanical vision would make Gest’s work susceptible to the discourse of “post-photography,” which is dominated by the means rather than the ends of photography. But the patently constructed nature of the photographs only serves to iterate the fact that Gest is not trying to hide anything. He is adamant that the means he employs should in no way be mistaken for the meaning. “That the image was made and manipulated digitally is neither here nor there. Digital photography simply allows me to make the picture I want, no more and no less.”

Toward that end, Gest’s recent portraits of individuals are a marked turn away from his previous work featuring groups and couples. The earlier work relied on conventional film that was digitally scanned. The spaces were incongruent enough to make process a consideration independent of the relationship amongst his sitters. In the new work, Gest resorts to strictly digital means. Subduing the mannerism resulting from his method of assembling the image, and subordinating it to a singular subject foregrounds the content, which is where his work parts company with “post-photography.” Despite significant advances in photography’s technical development, Gest’s work argues that there has been no corresponding evolution of social and psychological content, only a deepening, as portraiture is both inextricably bound to the invention of photography on the one hand and equally culpable in the rehearsal of photography’s limits on the other. In that regard, Gest’s portraits relapse into pre-photography, meaning painting, a claim supported by his admiration of Alice Neel, not to mention the labor-intensive nature of his work, which results in what are for all intents and purposes handmade photographs albeit digitally produced. But no matter how mannered, his images are resolutely photographs seeking to be read with a degree of immediacy and transparency that defines the medium.

Rather than formal, frontal portraits of the sitter in situ, Gest’s images are part portrait, part narrative, with the moment and mise en scene being as much an element of the story as the person depicted. Unlike August Sander’s latter day progeny, namely Thomas Struth and Thomas Ruff, Gest prefers a clandestine presence, unobtrusive enough for his sitters to proceed with their humble affairs. As a result his work belongs to a trajectory of street photography brought to bear upon the domestic sphere. Like the work of Tina Barney, Gest’s work is rich with indices of class: Erick’s shoes; Jessica’s mix of cheap bed linens and expensive jewelry; the crumpled “Treasure Island” bag in which Joe brings his leftovers to work; Curt’s sports car; or the speedboat doubling as Kathy’s chariot. But unlike Barney’s, Gest’s work is not a species of documentary, and certainly not a portrait of an upper class to which the photographer is privy by virtue of membership. Lovingly portrayed as individuals in full, Barney’s subjects are utterly self aware in bearing and ritual. Her photographs depict relations amongst friends and family, who, with sociological accuracy, conform to the stereotype of what in part and parcel is white, Anglo-Saxon, protestant identity. By contrast, Gest’s work, as a more heterogeneous group of individuals, avoids the bulwark of group identity. Although some may be economically better off than others, Gest’s sitters, based on the details, belong to a middle class hardly immune to anxiety. Furthermore Gest isolates his sitters, capturing them in the brief seconds when social relations are momentarily atomized and subject to an ever-encroaching alienation. Rather than strive for an intimacy and personableness, which are Barney’s stock-in-trade, Gest strives for a psychological tenor marked by retreat into the privacy of thought.

It is impossible to know exactly what is on his sitters’ minds. The photographs illustrate a state of reflection taken to be psychological as the machinations of thought and feeling correspond to a down cast stare lacking an object of focus. The sitters’ faces are drained of expression, revealing nothing about their personalities. But the photographs are less about knowing them through their physiognomy and more about recognizing and empathizing with the moment of reflection in which the sitters can only be known through their immediate surroundings, comportment, and tasks. Who Gest’s sitters have become is dispersed over and reflected in their accessories, their jobs, their shoes, the unwatered garden, the granite counter top - in other words, the mundane trappings of self.

The construction of a private self of “unassailable singularity” as it happens before Gest’s camera serves to question the construction of that very self in reality. How well can we know ourselves? And what constitutes self-knowledge? Is it possible to construct a self upon which to reflect without recourse to the myriad social and object relations that exist outside memory? In other words, is who we are incumbent on where we are and what we are doing? Are we strictly what we project? Or is there more? Gest’s photographs insofar as they allow us to know the sitter only expose the impossibility of us ever getting to know ourselves. We are looking at the sitter’s blind spot: our knowledge of them is not to be mistaken for their knowledge of themselves. Commuter, mother, wife, administrator. These images do not disclose an autonomous inner self. Rather they reveal a self-dependency on trappings that have become a convention subject to question.

As portraiture, Gest’s images are preoccupied with what reflection looks like. As narratives, however, they ask when reflection occurs. Gest makes a direct correlation between the withdrawal of his sitters from any kind of social engagement and their appearance in professional/cocktail attire, as if the moments of deepest reflection are precipitated by the construction of our public selves. In this respect they share an affinity with the work of Beat Streuli whose clandestine street portraits reveal the instability of our public demeanor. Within the ebb and flow of city streets, Streuli’s unwitting subjects oscillate between a full and conscious possession of their comportment, and a retreat into a realm of thought isolating them from the bustle. They are “alone in the crowd” so to speak, where being alone is predicated on being in a crowd and vice versa. Gest’s sitters, however, are alone without the crowd. Beyond an investment in the formal shell of self, little of the self is forthcoming without activation on the part of others. In this regard Gest’s sitters appear as either half empty or half full depending on whether the images are approached from the inside out or the outside in. Does the sentience on display supplement its surroundings or do the surroundings supplement the sentience?

Over the course of the Twentieth Century, portraiture has been caught between a humanist imperative to offer a physiognomy-based, psychological profile on the one hand, and the dismantling of subjectivity on the other. (“This is a portrait of Iris Clert if I say so.”) Its most brazen resuscitation would be Warhol’s silkscreen portrait project not to mention his screen tests. Fine art would have to square itself with the cult of stardom and advertising where there is no self without an image. Since then, portraiture has been frozen in a dialectic between the self’s dissolution and its reconstitution on terms bigger yet more shallow than life. By this account, Gest has inherited an anxiety-ridden genre ripe for exercising a healthy doubt about that which comprises a sense of self. Between our driver’s license and advertisements using portraits of “real people” for the sake of testimonial we exist partly as a matter of fact and partly as a matter of fiction. Accordingly, Gest’s photographs do not inspire the confidence belying the assertion “I think therefore I am.” These days, at most, I think I am. Maybe. 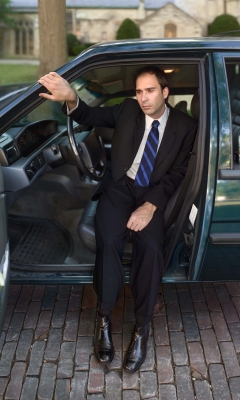