The Cubist on the boulevard. Courbet in his studio and Corot in a landscape… everything in its place. Place transforms man and man transforms nature. Hence the word ?art.? On the boulevard there is already much “artifice,” but it is not yet “art.”
—Piet Mondrian, Les Grands Boulevards, 1920

Mondrian had a broad understanding of culture as our mediated relationship to the natural world, specifically culture as an adaptation of natural resources toward human ends. Art was a subset of activity belonging to a larger notion of culture whose greatest achievement was the city, which Mondrian celebrated throughout his writings. With their spiritual roots intact, Mondrian’s signature checkerboard abstractions were a correlative to the built environment, an abstract art for abstract living. Mondrian considered his checkerboard abstractions objective in the sense that they, like the city, were their own reality, divorced from nature but no less real. Indeed, through the gridded lens that is Chicago, Mondrian died a landscape painter par excellence.

Whereas Mondrian reveled in the frisson of an early Twentieth Century Parisian boulevard whose spring air held the scents of “gasoline, perfume and coffee,” the work of his latter-day compatriot Avery Preesman hits closer to home at, say, the nexus of Chicago, Ogden, Milwaukee, and Elston avenues. Sandwiched between the Kennedy expressway and the north branch of the Chicago River, it is a pocket of complex intersections calling attention to itself because it skews the grid in a way that can only be understood abstractly. Yet, coming off the southern tip of Goose Island, with its industrial remnants and ruins (rail tracks to nowhere, forgotten foundations, solemn, disused gantries, cement silos), nothing could be more organic to Chicago.

Likewise, Preesman’s work makes the term “organic” relative. His paintings and sculptures naturalize our relationship to what could only be called a forest of signs, confirming the extent to which what we see and how we see it are in fact already abstract. Based on formal impressions of quotidian and personal subjects, Preesman’s brand of abstraction, while discreet, is very open-ended. The elements of his work tend to be spare, their relationships simple, and the handling of materials highly tactile. Although the work is staunchly abstract, it is hardly autonomous, welcoming an engagement with architecture and unafraid to court idiosyncratic narratives. A quirky mixture of the symbolic and the diagrammatic, Preesman’s geometry is of the humanist variety where rationality is not privileged over expression no matter how consuming the preoccupation with form. At their most expressive, his plaster-caked frame structures can seem more the product of an irrational collapse than any will to order.

Since the start of his career in the early 1990s, Preesman (b. 1968) has moved seam-lessly between painting and sculpture, citing Martin Kippenberger as a liberating influence in this regard. Kippenberger as a model of production, however, is as far as that comparison goes since Preesman’s work is anything but ironic. His belief in the primacy of formal expression is safe haven for any and all concerns including the biographical, which in W68/Westpunt 68, 2000-2006, comes as a suite of photographs on which the artist has applied a dense printer’s ink. The image is of a house built by the artist’s father in Preesman’s native Curacao. His abrupt, choppy line, which seemingly desires to mimic all the while effacing this modest structure, forms a structure of its own, one that denies the viewer access to an arid and generic pastoral under the most tranquil of blue skies. The series is an unabashed dialogue between father and son being played out as the temporal discrepancy between a picture-perfect past and an artist’s mark agitated by its inability to harmoniously broach the photograph’s hermetically sealed memories.

No matter how poignant the effect of his work, Preesman is never above rudimentary observation. Although abstract, his work corresponds to any number of observable moments and relationships, which distinguishes it from a more rote, and remote, formalism. As a result, his work can derive strength from being unapologetically simple rather than resort to being self consciously minimal. Preesman’s work asserts abstraction as a means of grasping otherwise intangible relationships. In this respect, Preesman’s art is the precipitation of a priori knowledge into a material form making abstraction both a matter of fact and a fact of matter. More than organic, his work is a species of abstraction that has been thoroughly domesticated and therefore threatened with being read as an allegory of modernism. Through structure and build-up, the gross materiality and physical presence of Preesman’s work, however, insists upon the phenomenological over the allegorical. Preesman would have been driven to sculpture if only as means to push abstraction out of the second and into the third dimension where the work’s claim upon Euclidian space would become real rather than remain illusory.

The Society will present a selection of Preesman’s work from the past decade including a new body of painting; a signature chandelier work; a monumental, floor-based sculpture; and Corral House Westpunt, a suite of ink drawings on color photographs, four of whose twenty-six images are featured on this poster. The exhibition is a beautiful study in place and placement as the lines and angles in Preesman’s work will resonate with those of the gallery to a point where they look natural in the space. Indeed, Preesman’s abstraction represents a culture that, as Mondrian understood, has taken on a life of its own. Based on the above quote from Mondrian, art is culture twice removed from nature making it abstract by default. For Preesman, this translates into an abstraction which has no qualms indulging seeing for seeing’s sake. However, through composition and materials, most notably concrete, Preesman’s work cannot fail to reference the built environment, whether it is to elements that are already abstract in their design (Tudor façade, train tracks), or that in their reference to an objective reality function abstractly (maps, floor plans).

Preesman’s work can be contextualized in relation to Mondrian not because they are both Dutch (that is coincidental), but because Mondrian was the first to declare abstraction’s absolute autonomy while insisting on its capacity to express structural changes in the social fabric wrought by modernity, namely urbanization. But unlike Mondrian, who with respect to urbanization was a resolute positivist despite living through World Wars I and II, Preesman comes across as brooding and melancholic. The tiny flames atop the thin candles of his chandelier read strictly as a sign of hope against the gravity of their cement support. Preesman’s formalist sensibility, however, keeps any bent for expressionism well in check. His manipulation of materials, although expressive, registers as the residue of emotional abandonment. All that is left is a structure far outweighing what feelings remain. Nor is the work nostalgic for modernism, mourning the loss of its sincerity however misguided its ideals have since proven. Relative to Mondrian, Preesman’s moodiness is purely a matter of chronological perspective. As with the Doppler effect, it depends on when you were born as to whether modernity appears red or blue, whether it is coming, going, or just plain gone. In short, Mondrian’s is a celebration of the City that for Preesman is a given.

Cities, however, are still developing, their transformation being conducted under so-called “post-industrial” auspices. In this respect, Preesman’s structures are consciously over-determined, as if the present were trying to understand itself in archeological terms. But no matter how confident in its tectonic bearing, Preesman’s work is scored with a doubt that gives way to deeper humanist reflection. The built environment becomes symbolic of questions as to whether, if by our own designs, we know what we are becoming, or are we hopelessly strangers to ourselves. This question, which is one of culture without recourse to nature, is one of cold comfort indeed, but comfort nonetheless. 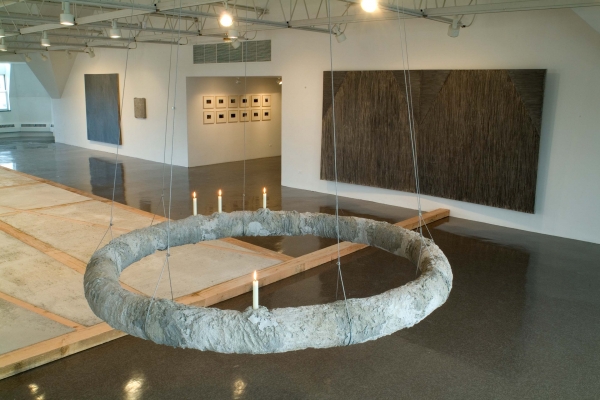