Essays by James Rondeau and Hamza Walker, interview by Okwui Enwezor Published in conjunction with the Art Institute of Chicago

Thomas Hirschhorn takes the spin of electronic information, the globalization of the world economy, the interconnectedness of the culture industry, and a few truckloads of everyday craft materials such as foil, wood, cellophane and paper, and with a stroke of innovation, reconstructs the “world” in his overwhelmingly chaotic, but nonetheless brilliant sculptural installations. For his 2000 Renaissance Society exhibition, Hirschhorn installed World Airport, a profound statement on the dissolution of national boundaries in a world connected by air flight and mass-mediated information. It is a manic and sprawling recreation of an international airport, complete with an aluminum foil tower and paper maché jumbo jets. At the Art Institute of Chicago, Hirschorn presented an entirely new piece, Jumbo Spoons and Big Cake, which comments on the banalization of culture and intellectual thought that results from the commodification and mass-mediation of 21st century ideologies. The catalog essays address each of the works, offering a means to intellectually contend with and contextualize the information overflow that Hirschhorn delivers in his work. In addition, the abundance of illustrations offer not only a chance to compare Hirschhorn’s recent Chicago installations, but also to look at many of his other installation works, including Critical Laboratory and Very Derivated Products. 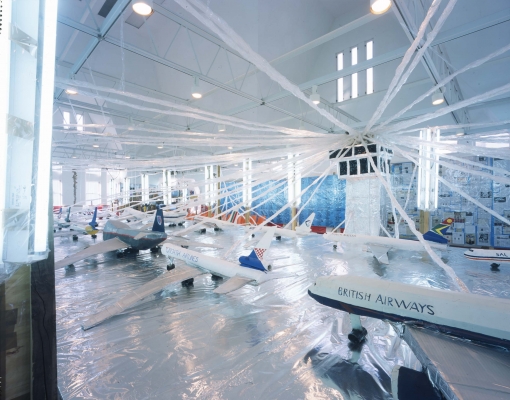