Modernity is synonymous with progress, especially when progress assumes the form of a historical narrative. Modernity, however, is not simply a historical narrative; it is a master narrative. As such, it is the grand story uniting all other stories that taken together represent the state of the world as we try to comprehend where the present moment came from and where it might be going. Both the changes and the rate of change experienced over the past two and a half centuries have earned Modernity a reputation as a condition of permanent revolution. The pursuit of an ideal social order has generated numerous blueprints, some calling for violent change. Central to any enlightened discussion about improving the human condition is uplifting the status of women. Not surprisingly, the belief in the social, political and economic equality of the sexes was literally born in the spirit of revolution. If feminism proper has a date of origin then it’s 1792 with the publication of Mary Wollstonecraft’s treatise The Vindication of the Rights of Women, which was written in her native Britain where debate about the French Revolution, then in its third year, was vigorous to say the least.

Over the course of the next century, Wollstonecraft’s text became one amongst many that lay the foundation for what, by the Twentieth Century, became a movement conscious of itself as an historical continuum. Working across successive generations, feminism came to encompass concerns ranging from securing fundamental legislative equality to reflections on the very nature of being. Beginning with Wollstonecraft’s text, feminism has become a comprehensive language of critique and social change, one co-extensive with Modernity as a historical master narrative.

According to the work of Swiss artist Mai-Thu Perret, feminism, as a distinct tradition of self-empowerment, is a master narrative in its own right. For the past few years, Perret has been writing The Crystal Frontier, a fictional account of a feminist commune founded by five women in the Southwestern United States. In no way, shape or form a finished document, The Crystal Frontier consists of diary entries by its female protagonists who reflect on the lives they left behind, the reasons they left, and their personal hopes and hardships in pioneering a utopian community. Perret, who studied English literature at Cambridge, is more interested in character development than setting. No More City, an extract from The Crystal Frontier featured at the beginning of this exhibition, reveals the escapist impulse motivating the women. Whereas one journal entry may be reminiscent of Willa Cather, another may come across as the delightfully convoluted, ideological rant of a disgruntled graduate student frustrated by her inability to translate, say, Monique Wittig into a meaningful “praxis.”

“The Crystal Frontier” is a master narrative insofar as it is a grand story generating other stories, which in the case of Perret take the form of sculpture. Whether they are large banners, folksy handcrafted ceramics, a bunny coop, papier-mâché mannequins, a slightly oversized Constructivist tea set, or altered modernist furniture, nearly all of Perret’s work is derived from The Crystal Frontier. Perret’s heroines follow a routine of work, leisure, and self-improvement through therapeutic exercises in self-expression. For money, they sell crafts. The creation of a fictitious world, one replete with hand-made crafts, gives Perret a great deal of latitude in the artistic vocabularies she chooses to exploit. Whether drawing on Russian Constructivism or Judy Chicago, Sonia Delaunay or Jorge Pardo, Katy Schimert or Andrea Zittel, Perret engages the visual arts as a readymade language whose elements, re-fashioned in her hand, are deployed toward ends stranger than the sum of either their literary or visual sources.

A Uniform Sampler (2004), one of Perret’s most ambitious works, consists of five, life-sized papier-mâché figures that were made for an art fair, a setting where her crudely crafted mannequins were meant to conflate viewing art with shopping. Their featureless faces are each covered with a large color dot that becomes the source of an intriguing estrangement by effacing an already absent personage. Whatever individuality these figures could be said to possess is in their clothing, which, as it relates to The Crystal Frontier, was theoretically crafted by the story’s characters. In reality, their clothes were designed by Ligia Dias, a Paris-based designer whom Perret has also enlisted for the Apocalypse Ballet, a new suite of five figures on view at The Society.

In the Apocalypse Ballet, Perret’s and Dias’ admiration of Constructivist and Bauhaus decorative arts-ceramics, textile, jewelry and furniture design-is evident in the costume design where any elegance is reserved for the edges of a generic and less than utilitarian square-cut dress. When placed on Perret’s action figures, which are performing simple gymnastic poses while holding neon hoops, the reference to Constructivist dance and theatre performances becomes even more apparent. After choosing an element from The Crystal Frontier to realize as sculpture, Perret brings additional visual and literary references to bear upon the object, as is the case with Apocalypse Ballet’s title and the neon hoops, respectively based on a well-known illustration by the 19th-Century French caricaturist J.J. Grandville and the finale of Busby Berkeley’s 1943 film The Gang’s All Here.

Perret’s work is first and foremost anachronistic. Although The Crystal Frontier is set in the present, nothing could be more frozen in time than the idea of establishing a feminist commune. If anything, The Crystal Frontier is a trope for exhuming not just a recent past but any and all points along the historical continuum of feminism. In Perret’s alternate universe, however, feminism does not serve to complement utopian thought. It is, rather, the other way around. Utopian thought is accountable to feminism. Functioning as a master narrative coextensive with Modernity, feminism becomes a binding agent for utopian thought, be it grounded in fact or fantasy. Perret can reference utopian aspirations as expressed by the Soviet avant-garde or as expressed in Grandville’s proto-surreal illustrations parodying a 19th Century world in which a burgeoning materialism would seem to make anything possible. Tellingly, the other component of the exhibition is an enormous, round, aluminum clad teapot (12 feet in diameter), replete with a door. Viewers are invited to enter the teapot in which Perret has hung drawings purported to be those of The Crystal Frontier’s female protagonists. The immediate impression is that one has indeed entered Lewis Carroll’s Wonderland.

The Crystal Frontier is a world in which historical contradictions have been annulled so that a project such as socialism, which sought to dissolve gender distinction, can rub shoulders with the objectification of women as exemplified in the work of Busby Berkeley, or Vanessa Beecroft for that matter. But Perret’s work is not frozen in time; it is time frozen. Modernity as a historical process of dialectical change is being brought to a halt with its contradictions intact. In this respect, a fixation with the 1960s and 1970s as exhibited in the work of Perret and numerous of her contemporaries is symptomatic of the extent to which the rhetoric of alternatives belongs to a disavowed past where artists have been looking for the glimmer of a future that doubles as something other than our present. Under the pressure to reconcile a previous era’s aspirations with the current moment, history appears warped so that Carroll’s Alice has no scale relative to the historical gains women have made on the one hand and a hopelessly reified femininity on the other. Alice could very well be ten feet tall. But she could also be in chains just as easily as she is in Wonderland. 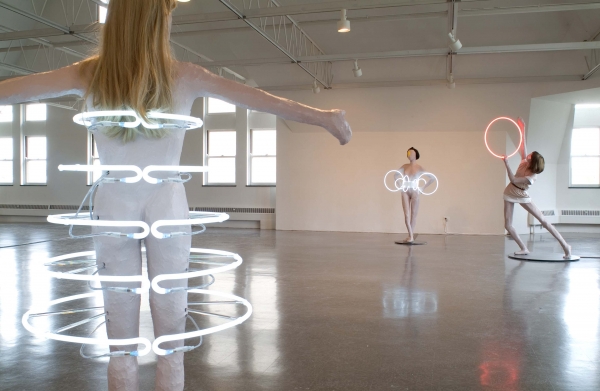 “And every woman will be a walking synthesis of the universe”