How full of the creative genius is the air in which these are generated! I should hardly admire more if real stars fell and lodged on my coat. Nature is full of genius, full of the divinity, so that not a snowflake escapes its fashioning hand.
—Henry David Thoreau, journal entry, January 5, 1856

With a structure whose geometry appears to speak confidently of purpose and intent, the snowflake will forever beg the question, who makes these things? As Thoreau’s journal entry makes clear, inside every snowflake is the proto-language of Intelligent Design. Over the centuries, the snowflake has been read as the means through which the divine reveals itself, taking exquisite care with something as seemingly infinite in number and variation as it is ephemeral. Its beauty aside, the snowflake remains a fundamental metaphor for the complexity and transience of all living things. Just as soon as the snowflake impresses upon us the idea of a kaleidoscopic order whose harmony is derived through the union of sameness and difference, where one is seen through the other, the snowflake disappears, becoming a sign for that which is in fact elusive.

Proof of the snowflake’s infinite variety was borne out after the camera’s invention. We owe the certainty with which we are taught “no two snowflakes are alike” to Wilson A. Bentley (1865-1931), a Vermont farmer whose interest in meteorology led him to photograph more than 5,000 snow crystals. These, along with copious notes about the atmospheric conditions when the photos were taken, form a genuine scientific study.

But under Bentley’s aegis the subject of awe became the victim of inventory. Each page of Snow Crystals, Bentley’s two hundred page magnum opus, features twelve hexagonal snowflakes, all of equal size, arranged in grid formation on a black background. Stripped of sentimentality, they amount to the ne plus ultra of modernisms, namely an archive. Bentley’s singular obsession was beyond doubt a labor of love. As a visual document, it is the culmination of a cultural discourse while being extensive enough to fulfill the scientific imperative of objectivity. Bentley’s photographs present the snowflake as a work of art that the camera only serves to reveal as such. His efforts made the snowflake a part of popular consciousness to the extent that it became a definitive staple of kitsch, placing it outside the purview of the fine arts.

Forecast: Snow is Yutaka Sone’s paean to the snowflake. A mixed media extravaganza, it features painting, drawing, photography, sculpture, and last but not least, a forest of roughly 100 pine trees. Nestled within this winter wonderland are a series of marble snowflake sculptures ranging from several inches to a few feet in diameter. Sone is interested in a range of idyllic associations with snow, be they remote and dramatic mountainous landscapes such as the habitat of the elusive snow leopard, or activities as homespun and humble as making a snowman. A pair of handmade skis and a charming vignette of a wintery ski lift scene hewn in marble reveal Sone’s tribute as that of an unabashed thrill seeker. For Sone, the simple pleasures offered by the great snowy outdoors are a source of nature’s inexhaustible spiritual currency despite an ever-burgeoning recreation industry.

Born in Japan in 1965, Sone has been based in Los Angeles since 2000. His work is anything but medium specific. Painting, photography, video, performance, sculpture are present throughout his oeuvre in equal measure. For the past three years they have all been put at the service of themes inspired by snow. This includes his stint as the frontman for his rock-n-roll outfit, The Snowflake Band. As one could easily surmise from this exhibition, much of Sone’s work, to put it plainly, is fun, often entertaining in the performative sense. In 1993, Sone gained international notoriety for Her 19th Foot, a performance/sculpture featuring a string of modified bicycles hitched together so as to accommodate 19 riders. Since 1996 he has worked with craftsmen in China to create a striking body of marble sculptures whose subjects have included the island of Hong Kong, roller coasters, and Los Angeles freeway interchanges. Marble is synonymous with sculpture in its honor/memorial guise. Using Sone’s marble freeways as a terminus, one could narrate the history of Western Civilization through carved marble statuary, from its cradle in Greece to a Los Angeles taken to be its current gravesite.

Not only is marble a standard bearer of the fine arts, it imparts nobility to its subject. Marble’s opacity and density make it a geological metaphor for purity and eternity. Subject matter carved in marble is no longer of its present; it belongs to the Ages. Paradoxically, Sone’s marble roller coasters and expressway interchanges privilege the momentary over the timeless, motion over stasis. They are sites where the thrill and hustle of contemporary life at their most extreme yet quotidian achieve expression in the form of the arabesque. More subtle but just as intriguing is his marble sculpture Hong Kong Island. Executed in 1997, the year the island reverted to Chinese rule after its 99-year lease to Britain expired, Hong Kong Island is less a monument to the place and more a monument to historic political change. Ultimately Sone’s marble works are monuments of and to the present, allowing us to see ourselves in flattering archaeological terms as a civilization that cherishes living in the moment, whether that moment is of historic proportion or as fleeting as the life of a snow flake.

The previous century, however, was noted for having adopted industrial materials and methods of fabrication as a direct challenge to two of sculpture’s pre-modern paradigms: the artisanal handling of noble materials, and the breathing of life into inert matter. Although we are two generations removed from minimalism, resuscitation of either sculptural paradigm still seems a conspicuous indulgence. For Sone to render in marble a subject taken as proof of God’s handiwork, albeit one reduced to kitsch, is to consciously pit a bankrupt form against an equally bankrupt content. The result is that both the marble object and its trivial subject matter are redeemed as guilt free pleasures.

As archeological monuments to a present we are loath to recognize, let alone celebrate, the humor in Sone’s work comes at the price of critique framed in terms of loss. Sone’s work, no matter how much it revels in bankruptcy, is resistant to mourning, and as a result is immune to irony. It is straight-up fun, delightful even, no strings attached. Monumentalizing the snowflake in the wake of Bentley’s archive is perhaps the only way to properly acknowledge the snowflake’s fate as kitsch, and at the same time to rescue it from Chapter 11 so that we may once again partake of what have been frozen assets indeed. 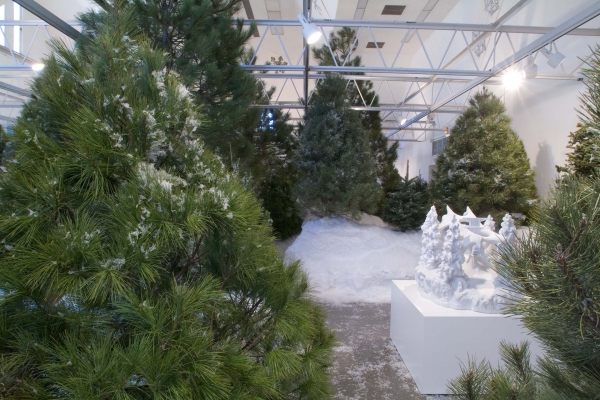