“When ‘anything goes’, and, it makes no difference whether art is abstract or representational’, the artists’ world is a mannerist and primitive art trade and suicide-vaudeville, venal, genial, contemptible, trifling.” -Ad Reinhardt, Art as Art, 1962

Let there be no mystery as to what Reinhardt’s ghost would say: LIVE FREE OR DIE! For him, abstraction was anything but a choice. It was a matter of historical necessity, as abstract painting was considered the penultimate expression of an era defined and driven by a logic of essentialism, and in his case, an essentialism that gave way to a deep mysticism. Before devolving into a turf war with minimalist sculptors, abstract painting was viewed as an untrod summit whose pioneers arrived at their signature styles in an empirical struggle of existential, if not epic, proportions. Reinhardt could hold pluralism in casual contempt in part because it did not define a painterly struggle the way it would for a later generation.

Rebecca Morris’s commitment to abstraction lies somewhere between the poles of fierce and rabid, a prerequisite for coping with a pluralism arising not only from across disciplines but from within the discipline of painting itself. Abstraction is now a given, an option that is taken for granted as one chooses rather than fights to become an abstract painter. It is a choice, however, within a discipline that has become a field of specialization by virtue of taking on the characteristics of a language. If the closure of modernist painting is taken as the closure of painting itself, then under the aegis of postmodernism, painting’s history is a finite collection of styles readily offering itself up for quotation. In other words, paintings are read in and through reference to other paintings begging the question: once abstraction has acquired legibility is there such a thing as an abstract painting?

Judging from Morris’s work, the answer is a resounding “Hells Yes!” Hers remains a rudimentary language of shape, line, color, gesture, surface and composition, that quotes so as to reduce its references to an alphabet. In this respect, her paintings function as an Ur or proto language of abstraction through which one can discern the compositional logic of Frank Stella’s black paintings, an isolated Pollock-like splatter or a Hans Hofmanesque approach to the discreet juxtaposition of color. The earliest paintings in the exhibition feature Morris’s signature device of layering a shape that is an undifferentiated hybrid of square and circle. Executed flat on the floor, these paintings look as though they have emerged, face-up, from a boiling cauldron of protozoan possibilities dating back to the Flintstones. Between these and her paintings consisting exclusively of lines, her early vocabulary was indeed one of sticks and stones. When not registered as a scrubby stain or a series of wavering, spray-painted lines, her touch consists of a redundant slathering of viscous paint that builds in thickness, going from painting as a verb to painting as a noun. On stretchers deeper than required for paintings of their size, these canvases assert their objecthood so literally they become rhetorical. Facture is determined by gravity and the drying properties of oil which contracts as it congeals, forming a skin with an unctuous, hive-like wrinkling that seems to emerge from within the paintings. With a life of their own, the paintings become susceptible to disease and aging, forms of corruption well beyond any irony.

Morris’s earlier paintings could hardly be said to escape such irony, which is endemic to any and all questions of legibility. Whatever irony may be attributed to her intent, however, corresponds to history’s larger irony, which was already well in effect. Submitting abstraction to a process of quotation that reduces stylistic specificity to very basic and general features is to craft a generic abstraction, one that cannot fail to signify abstraction’s utter ubiquity. Little wonder these early paintings resemble a species of abstraction found in transient public spaces: fast food dining courts, airport terminals, the DMV. Once considered an ideal complement to public spaces because of its universal appeal, abstract art came to be read as a gratuitous effort to beautify impersonal spaces of rote functionality. These spaces, with their accepted levels of vagrancy and dereliction, often resulting from the public’s very absence, were in effect non-spaces. Abstraction spoke for no one, becoming a vacant language. Referring to figurative elements lacking a place within abstract paintings, Clement Greenberg coined the infamous phrase “homeless representation.” If the dialectical pendulum of history has undergone a full cycle then it is safe to say Morris’s early paintings are examples of “homeless abstraction.”

Morris’s predilection for a scathed abstraction is a way of welcoming it and its subsequent fate, arms open wide. As for an attendant irony, let there be no mystery as to what she would say. BRING IT ON! For painters who share Morris’s commitment to abstraction, the challenge is to reinvent on terms that are relevant and relative the spirit and dialectical conditions that make abstract painting urgent and necessary. For the better part of the Twentieth Century, this struggle was defined by a dialectical tension between abstraction and figuration. In Morris’s case, the struggle is defined by an irony residing exclusively within the domain of abstract painting. In short, abstract painting has nothing to overcome but itself. This is an irony Morris is bold enough to instigate and even bolder for transcending as the paintings, over the past few years, have increased in scale and complexity on every front—palette, paint handling, and composition, including notable forays into crafting deep space—making them robust enough to dispel any question of whether this is painting for painting’s sake.

The struggle from one generation to the next might be different, but the goal of making paintings of which nothing is asked other than that they be paintings remains the same. Indeed, Morris’s paintings are anachronisms. Her method of reducing any attributable stylistic specificity to rudimentary painterly concerns negates the idea that abstract painting would, could or should evolve. Her sticks and stone period could just as easily serve as a paean to Kandinsky’s Point and Line to Plane as it could be said to reference the New York School. Although the advent of pure abstraction is a thing of the past, it was not marked as belonging exclusively to the early years of the Twentieth Century or the New York School. Abstraction belonged and belongs to moments of an indeterminate future. This would problematize any claims to contemporaneity made on abstraction’s behalf. Hovering outside an historical dialectic, abstraction operates at its own speed.

At times, it has been ahead of its present, and at others behind. Several of Morris’s paintings circa 2000 might recall the 1980s better than a painting actually executed during that decade ever could. Whatever nostalgia they induce, however, is strictly incidental as it is more symptomatic of the ever-present desire to see beyond immediate appearances and know the world in all its brazenly abstract glory. This would make abstraction a permanent fixture of modernism, and by default postmodernism. Nothing to mourn, and in the absence of any shame, nothing to redeem, these paintings are a call looking for a response. So say it loud, I’M ABSTRACT AND I’M PROUD! 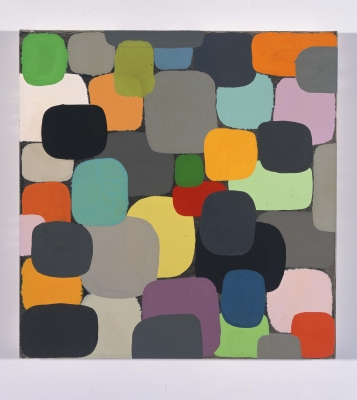