Let this be said on behalf of the entire animal kingdom. Unshackled from the Great Chain of Being, fauna are now free to make one another’s acquaintance in a fashion more mutual than one imposed by a divine order in which humankind was thought to hold a place above all other species. Having persisted from Classical Antiquity through the Middle Ages and into the Renaissance, the Great Chain of Being was quite an elaborate framework whose ranking system was based on a spirit-to-matter ratio with inanimate objects at the bottom of the list. There were hierarchies within the various strata so that within the category of, say, metals, gold was thought to contain more spirit than lead, or within the category of birds, eagles contained more spirit than chickens. The strata, however, were distinct and there was no continuum between humans and animals. In this respect, humans stood outside of nature. An inquiry into the nature of being in which the strata were distinct and quantity of spirit accounted for difference was obviously of no comfort to Darwin who refused to view humans as the product of exemplary creation. As part of nature we were subject to the laws of evolution, laws determined by the struggle for existence. The formulation of a common equation among and a continuum within various species laid the groundwork for qualitative comparison. And so the mystery begins.

Do animals have presence of mind? This is as much a question for scientists who study comparative cognition as it is for Luxembourg-based artist Su-Mei Tse. For her installation at The Society, entitled The Ich-Manifestation, Tse video-taped a group of five tortoises whose images are projected in slow motion over a series of five large screens and are accompanied by an audio track heavy on the bass frequencies. At a scale several times larger than life, Tse’s tortoises recall their Jurassic era cousins, the dinosaurs. Are they aware of themselves, however, as survivors of any such species continuum? The use of the word “Ich” (The German word for “I”) in the title begs the more pointed question do they possess knowledge of self to the extent they understand themselves as individual beings?

That is a heavy trip to lay on an animal whose very appearance suggests burden. The tortoise does not seem to mind, however, which is perhaps why it is a universal symbol of such virtues as patience, self-reliance, and wisdom. Given their life span and the gradual pace of their movement, it is no wonder we attribute to them these qualities. Not to belittle the fight for survival and procreation, but what else do they have to think about? That depends on what constitutes thinking. Introspection, consciousness, problem solving, emotion, memory—the slopes of cognition and psychology are slippery indeed. Just as it was left to the tortoise to explain Xeno’s paradox to Achilles in Lewis Carroll’s short fable, What the Tortoise Said to Achilles, perhaps Tse is using the tortoise to tell us that the riddle of being is in fact a paradox of infinite proportion. The Ich-Manifestation is then hardly a portrait of tortoises. It is rather a portrait of humanity in a quest for self-knowledge deflected on to animals, which is in keeping with a definition of culture as the timeless act of ascribing meaning to nature. Despite the use of video technology, The Ich Manifestation can take its place alongside a host of animal imagery dating back to the cave drawings of Lascaux. The medium may have changed but the question remains the same. Brother wind, sister turtle, what is on your mind? 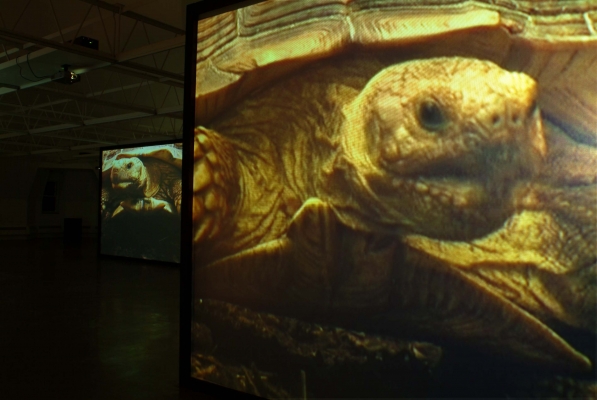