My eyes are vague blue, like the sky, and change all the time; they are indiscriminate but fleeting, entirely specific and disloyal, so that no one trusts me. I am always looking away. Or again at something after it has given me up. It makes me restless and that makes me unhappy, but I cannot keep them still. If only I had grey, green, black, brown, yellow eyes; I would stay at home and do nothing. It’s not that I’m curious. On the contrary, I am bored but it’s my duty to be attentive, I am needed by things as the sky must be above the earth. And lately, so great has their anxiety become, I can spare myself little sleep.
—Frank O’Hara, “Meditations in an Emergency” (1)

While heterochromia may sometimes be used to identify a difference in coloration of the hair or skin, most often it refers to a difference in the iris of the eye, heterochromia iridum or iridis. If this dissimilarity is characterized as complete, it means that it is a difference in color between one eye and the other; if categorized as partial, it refers to a section of a different color within the iris of one eye alone. The result of an unusual distribution of pigmentation, the condition can be genetic or acquired, and related to a range of other physical circumstances. Maybe Frank O’Hara had something like heterochromia iridum in mind while composing “Meditations in an Emergency,” arguably one of his most famous poems. When one reads (as I did on Wikipedia), that “there are three true colors in human eyes that determine the outward appearance: brown, yellow, and gray,” and that “the amount of each color an individual has determines the appearance of the eye color,” I couldn’t help but think that O’Hara must have done some ophthalmology homework before describing his “indiscriminate” blue eyes, eyes that would in fact not be blue at all, but instead his own unique mixture of brown, yellow, and gray that came together to look like whatever he meant by a “vague” blue.(2) And I’d like to believe that O’Hara would share my comfort with turning to such an open source as Wikipedia given that the diversity of his poetry demonstrates he was so clearly one himself.

Varda Caivano has been making resolutely open source paintings and drawings at least since I was first introduced to her work in 2002.(3) Everything I’ve seen of hers from then on has existed in a fully present yet perpetual state of becoming, a contradiction, to be sure, but no conflict. Brilliant at applying paint in various ways to make it look instantaneously material and atmospheric, Caivano also has had from the beginning a full command of what I take to be painting’s own idiosyncratic and never-ending version of heterochromia. In its reliance upon differences of color that are held within color itself as well as externalized and subjectified as they hit each of our (individual yet divided) pairs of eyes, painting remains a prime place that still can encourage and enable us to use our eyes to take things in with multiple and difficult to measure levels of—to borrow O’Hara’s list above—discrimination, speed, specificity, and loyalty.

Every description of any work of Caivano’s that I might undertake would include at least one “color-to-color” phrase: for example, blues-to-purples, reds-to-greens, even grays-to-grays, or even (especially striking in this exhibition) blues-to-browns-to-grays-to-blues. Such consistent, even unrelenting, transitions manifest exponentially in her work: her colors challenge boundaries, initiate contradictions, establish continuities and agilities all at once, but also in sequence. (It’s as if you could solve a mathematical equation by either taking it on in its established order, or by adding, subtracting, multiplying and dividing everything simultaneously or in any arrangement. In mathematics you’d get very different answers and only one would be right; in painting any answer could be right or wrong or neither.) What makes Caivano’s work especially compelling is that it does all of these things (and I’m just getting started) without constraining the actuality and the subjectivity of our eyes as viewers. Each of us sees her work the way we see it because of the way in which light hits our eyes at a particular moment to produce colors in our brain. (Painting and the concept of nature will never grow too far apart because of this.) These colors may not look the same to any of us.

Then there are the many ways that Caivano’s work simulates the rods and cones of our subjectivity and relative desire for making associations, whether we’re conscious of them or not. Her paintings and drawings deliberate on expansive categories like abstraction, the landscape, and the body while being and not being those things themselves. Put another way, Caivano presents her work (as she has often said) as “thoughts” rather than declarations or even—this is surprising—as actions. (More on this below.) All of our interpretations of what we may see “in” her work are circumscribed by space that she always maintains as discursive, whether within one work, between works themselves, or between the works and us. Her paintings are often brought right up to the point of nameability while remaining only (and resolutely) things in and of themselves. Time after time, her canvases put what they’re showing us on the tip of our tongues. For example, it looks as if it wouldn’t take too much for one of her recent horizontal paintings (Untitled, 2014 [VC234; not in exhibition]) to transform into a still life, albeit an especially scrubby one of a few basic object-like shapes. Its muted reds and oranges, and even more muted greens and other less identifiable colors, are set into place by a few areas of much brighter yet still-brushy blue, including a rather saturated V-shaped patch in the lower right corner that locks the perimeter of the canvas into, at the very least, a formal position.

Drawing plays an essential role in Caivano’s work. It is, in the end, what brings both clarity and complexity into the pictures. The painting described above contains a rectangle drawn in pencil that functions as if it were a frame within the frame of the canvas. It is the beginning and the end of all of the other drawn lines on the painting’s surface (lines that in some cases extend below the rectangle to the physical edge of the canvas, and in other places circumscribe some of those distinct still-life-like shapes), and it is also the crucial device for anchoring painting and drawing themselves as the subject and object of this (and the rest) of Caivano’s work. It tells us “this is thinking,” “this is an idea,” “this is a language.” Nowhere is this more emphatic than in the series of blue-and/or-brown/gray paintings that are included in this exhibition. At first glance, several of these paintings read as categorically unfinished because of substantial areas of uncovered canvas and linear drawing that seems to have been left to be in-filled later with paint. While not suggesting that reaching this conclusion is somehow misguided or untrue, it seems to me that in these works Caivano is instead dramatically reinforcing the self-referential underpinnings of her paintings-as-thoughts: their interplay of drawing (if not sketching) and what come off as strangely hybrid mechanical-organic colors and/or shapes casts them as not only diagrammatic but also somehow functional, recalling the paintings of Marcel Duchamp that led him to his major work, The Bride Stripped Bare by Her Bachelors, Even (The Large Glass) (1915-1923).

This in turn reinforces my earlier assertion that Caivano is not overly concerned with her paintings being seen as actions. Of course the ways in which they are physically made are absolutely crucial (facture has in no way disappeared), but in the end their gestures are, to paraphrase and repurpose the words Willem de Kooning used to praise Matisse, “just painting.”(4) In addition, a painting like Matisse’s View of Notre Dame (1914) can be seen as a key historical touch-point for Caivano’s investigations of drawing within painting, as well as a reminder of the ways in which painters, including Caivano, have continued to investigate the conceptual relationship between surface and ground (as in figure/ground). Richard Wollheim’s description of Matisse’s The Open Window (1913) resonates here: “For what he does is to associate the ground so closely with the surface—by which I mean that he charges the surface in such a way that it barely involves a shift of attention for us to move from seeing a certain expanse as ground to seeing it as surface—that we fully accept the size of the surface as determining the extent of the ground.”(5) It seems to be that this manner of making has informed Caivano’s decision to flank the installation of her seven canvases with four vitrines, each displaying several works on paper. Presented horizontally under glass as if they were specimens, these small works provide significant insight into her working methods, as well as an indication of the range of her use of color and willingness to hold open the interplay between surface and ground, to the point of occasionally cutting a section out of the paper itself, or collaging added materials onto its face.

Even so, I am not suggesting that all of the ways that Caivano’s work evokes nature or landscape are distractions or, worse yet, dead-ends. She uses nature as a language but deliberately holds its meaning open by using the tried-and-true components of painting and drawing: shape, line and color. And while I have no problem calling Caivano’s work beautiful, I think it is so because it resists leaving its components to their so-called “natural” devices, such as marks that read too easily as expressive, or colors and shapes left uninterrupted, as if they were only capable of carrying one possibility, one association. Repeating a phrase I once used to describe the work of Cy Twombly, Caivano’s work is “more lexicon than landscape,” but in her case it is more a thesaurus from which different nuances could be found, than a dictionary from which a definition could be applied.(6)

This is another reason why O’Hara’s poem came to my mind as a productive catalyst for this text: his “I-do-this-I-do-that” approach to poetry is a good fit with Caivano’s discursive approach to her work. Moreover, I think there is something about his arms-length attitude toward nature that could also be at play in Caivano’s work: in his poem, in the paragraph before the one cited above, he writes the following: “I can’t even enjoy a blade of grass unless I know there’s a subway handy, or a record store or some other sign that people do not totally regret life.”(7) Caivano is, after all, an urban painter, living and working in central London. To be discursive is to exchange ideas, even to argue, and Caivano’s work is fundamentally an argument, a position about, yes, painting and life. And, back once again to nature, it is worth repeating O’Hara’s claim from above: “I am needed by things as the sky must be above the earth.”

Late last year, Caivano described her work in progress for this exhibition as a “third moment,” one in which drawing would be incorporated more directly into the painting.(8) Increasingly she has set out to have all of the components of her work be as different as possible: media, sizes, and types, as well as the placement of the works themselves. (She experimented in 2009 at Tomio Koyama Gallery in Kyoto with placing unstretched canvases directly on the floor in front of paintings on the wall). For her, a change of scene is a change of seen, driven by a perpetual-motion machine that keeps the visual language of, again, things like landscape, the body, and nature (as its own language) from settling into any fixed position, rearranging the terms and boundaries of both painting and drawing in perpetuity. 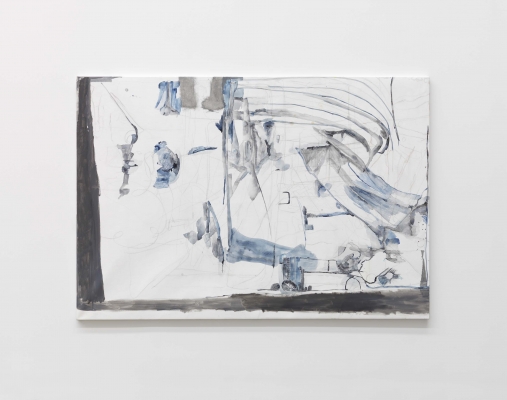