I wish I could say that my whole project is dedicated to the Americas, but I for sure don’t know what I am talking about, so I better not. I wish my whole project could be dedicated to the Holy Mother of Guadalupe. But I might have become too shabby a soul to proclaim my name and my word so very next to her, and as well, in connection to the, at least to me, such unbelievably intense and rich history of the Americas. She is the Holy Mother of all Americas and one can feel particularly today her possible influence everywhere. And maybe it is her influence, with maybe the influence of other good spirits as well, which has made my every day in the Americas almost miraculously wonderful, in which case I may then for sure at least say that my whole project is dedicated to these daily experiences in the countries of the Americas, experiences which stand in such opposition to those in Europe all the years before. It is dedicated to the compassion, the understanding, the intelligence of communication, and so remarkably, to the everyday good will of trying to make things for one another as good and easy as possible.

For many months I tried to work on these obviously simple expressions of the happiness in everyday life that I first finally found in my life in these countries on the great continent of the Americas. No big thing, I thought. I just had to explain it, what I was seeing and perceiving, by taking photos, by drawing and by writing things down in the low key diary form. I would say to myself privately, in regards my efforts, “For this project, I will try to formulate through art and writing, simple expressions of gratitude to all these people in the States and in Mexico.” In order to keep for myself the freedom of expression and preserve even the privilege and risk of being naïve, I first tried to avoid staring at other cultural products that express similar ideas. But then long months followed of sometimes ailing unproductive reflection, but at the same time filled with the huge pleasures of reading the most amazing books and seeing movies about the early encounters of Europeans with Americans, let’s call them the first Americans, although I believe no one is first. Anyways, I got really obsessed with transferring in my imagination my own experience to these fantastic narratives of first encounters, of Europeans arriving broken and sick and poor from the long journey and finding the amazing helpfulness of the Americans who took care of them and showed them a world much better than their own. I looked at these long ago adventure stories as if my own contemporary experience was reflected in them, as if they were a mirror of my present. Days and nights slipped by. Weeks became months. Memories of normal life dimmed.

This project is about experience and the attempt to work completely without judgment, either good or bad. Please, promise, to remember that. It is instead about trying to be observant.

One reason for wanting to work this way, apart from so many other more important reasons, which would be inexplicable here, might have been the desire to adduct new grounds of freedom. For instance the freedom to incorporate clichés, well established ones, including the most known facts and time-worn expressions. Of course there is a higher valued freedom in the field of art expression, which is to gain unknown ground, but sometimes the engagement for freedom has to go the other way too. And freedom is somehow part of the overall theme of this project, or should be, as it deals with such clichéd problems as encountering the Americas as a European and includes or delivers historically conveyed facts and information of other such encounters as well. At least in my belief, the experience of vast individual freedom is still strongly at work in the dealings of everyday life, wherever you go, in the place that once might have been called Turtle Island.

Like many others I was always extremely seduced by books about the early encounters of Europeans with Native Americans, from Columbus all through to the period of the civil war. There are too many of them though that are really very hard to read, for all the atrocities, the destruction, the genocide. It is unbearable knowing that the particular violent event you are reading about, was not a unique instance, that happened just that one time, but one that happened innumerable times during this period. But there are as well books, texts and reports, letters, etc. that are the most exciting literature and often describe the sweetest and most human events imaginable on this earth. For instance when European explorers, Jesuits, traders and others found themselves completely lost in the immense country, or when they arrived from the long crossing of the Atlantic Ocean completely exhausted, broken and half dead, from the travel, but much more so from the long hard years in Europe, and suddenly out of nowhere some of the Americans would immediately turn up and find these sick, broken individuals lying on the ground just awaiting death, and even if they’d already had some bad enemy experience with other Europeans, even then, they would care for them, feed them and give them their famous great medical care, all for free, until some weeks later the Europeans were fully recovered. The first encounter literature is so full of these reports. This, for Europeans, most strange compassion and sweet care of the Americans always touched me intensely and now as I for many months obsessively dove into this kind of literature I wondered what kind of subconscious pattern exists in my personality that I am so attracted by these texts. Suddenly I realized that, believe it or not, it is simply because almost exactly the same thing happened to me in my own life. I arrived once completely broken, sick and exhausted in America and had the unexpected merciful luck of meeting people who most compassionately and most unselfishly started taking care of me and achieving real miracles with me.

Surely for all these reasons the whole project will appear to a few as, hopefully, most sublime, to others as a most laughable, bad mixture of a visual arts adaptation of an adventure fantasy novel, or maybe, in the best case, as a most effable gesture of gratitude. And it really is an adaptation of some moments taken from adventure accounts, true ones, that somehow mirrored my own contemporary experiences of encounters in the, or definitely my personally, “New World”.

Anyways, the better question to ask myself before going public, is why does it mean so much to me to capture this outside or alien perspective, while at the same time there is nothing I desire more than morphing myself into a true Turtle Island citizen (American of many American nations) myself? Probably it is because I was always a bit of an alien too, wherever I was, wherever I will go, and therefore it would be best that I live there myself. Therefore one part of this project “The New World,” is one of the two publications, subtitled “The Application,” which is a kind of visa or citizenship application for turtle islands and hopefully for its native nations, a kind of story I would prefer sending when I do such an application in comparison to the real visa application.

And probably there should be an undercurrent running through this project, that it is all a kind of collection resulting from a life without much stability, with the hope of one day getting somewhere and finding a home. Therefore I ask for the understanding and the acceptance of the people who see these works and who already might have found and still find each expression of nomadism unpleasant.

Altogether after the long period of obsessive studies I believed I should write a kind of treasure island adventure novel for this project. A story including all my descriptions of entering the imaginative spheres of earthly paradises, the promised society of good people.

Whenever one makes the fundamental experience of entering a very wonderful and very greatly esteemed country, one can observe automatically in oneself the appearance of feelings of gratitude. That is one thing. But coming to such a country and then even experiencing the interest and the support, help and compassion of the people living there, this kind feeling should somehow be defined and expressed in this first personal, American institutional, one-person exhibition. 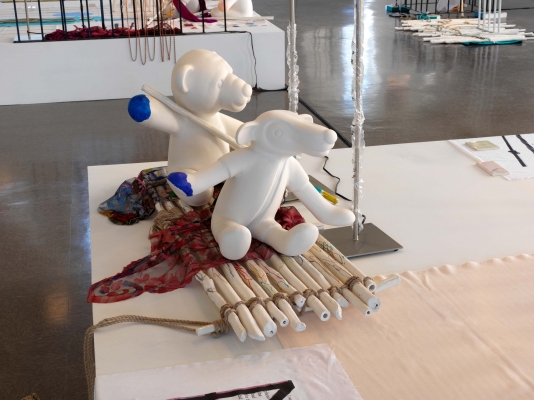