We have sufficient authority in the Dutch school of art, for taking as subjects of representation scenes of daily and familiar occurrence.
— William Henry Fox Talbot, The Pencil of Nature

One often says: The style is the man; but can one say with equal assurance: The choice of subjects is the man?
— Charles Baudelaire, The Double Life by Charles Asselineau

Does it make any difference what subject matter is used to express a feeling toward life?
— Edward Weston, The Day Books of Edward Weston

No aspect of the visible world has ever been off limits to photography. As a result, it has never experienced a revolution in genre. Debates have been more about how rather than what was photographed, even as photography’s efforts to achieve fine art status underwent a radical paradigm shift. Portraiture, landscape, still life, even the nude, all survived the transition from nineteenth century pictorialism to the arrival of a modernist sensibility whose credo was greater integrity to those characteristics unique to the photographic medium. These genres, however, would be reformulated on the grounds of photography’s newfound medium specificity, the core of which was an obligation to depict “the real world” as sharply and accurately as the technology would allow. The still life genre was a marked reprieve from this mandate. A tabletop arrangement of objects offered photographers greater control of their subject, making the still life an area of formal exploration, and or the means for personal expression as is the case with Laura Letinsky’s recent body of work.

Letinsky’s generation is heir to modernism’s triumph at making photography a fine art. Proof is her unabashed return to a project as outlined in the above quote from William Henry Fox Talbot’s 1843 treatise The Pencil of Nature. Despite the cloak of casual disregard shown to neglected foodstuffs and dirty dishes, Letinsky’s images are calculated constructions with nary an anxiety about their roots in seventeenth century Dutch still life painting. The lighting, as well as compositional, and spatial concerns betray Letinsky’s photographs as anything but a snapshot of, say, the Wolfgang Tillman’s variety. Both Letinsky and the Dutch masters share an interest in looking as it becomes seeing and seeing as it becomes contemplation. Photography is not being legitimated through painting, but painting is being retroactively ascribed a photographic way of seeing. Whether reality is transcribed onto canvas or film, the task and effect of raising reality to a symbolic order is the same.

Letinsky, however, is reticent to inscribe her work with allegorical significance. The work’s pensive quality is attributable to a delicate, compositional balancing act and not the photograph’s contents. Whereas the rumpled tablecloths, and complex diagonals may impart an uneasy melancholy over the world of intimate human affairs, Letinsky’s choice of objects is anything but personal. Indeed, the body of work, as a whole represents a formal exploration into the construction of sentiment as opposed to a statement of personal expression conveyed through the selection and arrangements of particular objects. For Letinsky, the symbolic value of the objects she has chosen is overdetermined to the point of exhaustion making their selection to some degree arbitrary. Whereas the juxtaposition of fruits and candy may represent the natural versus the artificial, Letinsky extends the artifice so as to experiment with what she calls “an acid pastel palette.”

Letinsky’s impeccable production values, however, bring this body of work within the purview of commercial photography, which has rendered the still life virtually illegible outside the dictates of advertising. Against the tide of magazine imagery, particularly those devoted to home décor and cooking, Letinsky’s photographs could not help but acquire a sense of loss, as there are no consumer goods around which our desires normally coalesce. They are conspicuously spare, the lust for life has expired, and along with it, any attendant sense of urgency. In the words of Meyer Schapiro, “we recognize within the same steadfast commitment to the visible that same distinctive distance from action and desire,” especially desire as aroused through advertising. Their negation of desire, however, is not to say they have abandoned still life’s time-honored appeal to the senses. In this instance, it just happens to be for your eyes only. 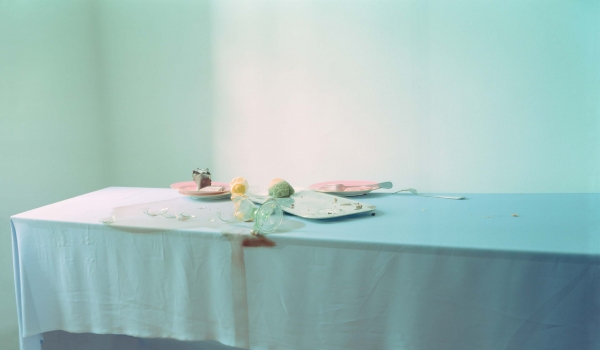