Minimalism poses more questions of art and subjecthood than it ever did of art and objecthood. Arguably, its most important contribution to the visual arts was the rigor and vigor with which it tried to abolish metaphor from the practice of sculpture. Eliminating whatever traces of anthropomorphism were to be found in an industrially- based assemblage tradition (Caro, Smith, diSuvero), minimalist sculptors helped further a trajectory of abstraction that had abandoned figuration and dismantled visual art’s capacity for narrative. Whether it was condemned as theater, or considered a useful ruse at best, minimalism’s refutation of humanist concerns was a polemical way of asking if there could be a new language of the self, one built around a reductivist phenomenology that would displace art’s traditional role as a repository for memory, history, fantasy, eroticism, and subjectivity. The consequences of such a rupture were greatly debated and are still being negotiated. In any case, minimalism became the basis from which to ask who we are, or perhaps more frightening, what we are, without a secure answer on the horizon.

Born in Holland in 1968, Arnhem-based sculptor Mark Manders belongs to a generation of artists for whom the return to figuration is a perpetual condition. Based on the work of a range of post-minimalist sculptors to emerge over the past two decades, with senior figures such as the late Juan Muñoz or Robert Gober, this return is complete only with the spectator’s emergence into a tableau haunted either by the figure’s absence, or its presence as something whose subjectivity, if not humanity, is precisely in question. As a result of minimalism’s banishment of the figure, the most subtle and abstract representation of the body, including objects strongly suggestive of a human presence, would be distilled into more potent signifiers. A profusion of associations would make it easy to activate but difficult to control such an object’s narrative potential. They appear beyond assembly into anything resembling an accessible, let alone coherent allegory as is the case even when sculptors resort to film a la Matthew Barney. A cogent sculptural language of the self, one that adequately speaks to and of us as holistic beings with a secure identity, is still under con-struction, leaving artists such as Manders to build models of subjectivity piecemeal.

Using the figure sparingly, if at all, Manders relies largely on alterations and configurations of quotidian objects and architectural fixtures to create disturbingly quizzical environments whose precise but unlikely combination of animal, machine and furniture-like elements approaches the surreal. Since 1986, all of Manders’ work has been subsumed under a project entitled Self- portrait as a Building, a work of purely imaginary architecture, the whole of which is unrealizable. In this instance, the idea of a building serves as a fitting metaphor for the self as both a construct and the site of being in a metaphysical sense. Despite having a floorplan detailing the loca-tion of Manders’ many handmade artifacts and objects, Self-portrait as a Building is exhibited in fragmentary states. Its parts may be recombined with new work to form open-ended verse that changes from one exhibition to the next as is the case with Isolated Rooms, his new project for The Art Institute of Chicago and The Renaissance Society. Conceived as a single exhibition in two locations, Isolated Rooms consists of several new installation-based works that further extend ideas he has developed in Self-portrait as a Building.

Manders makes no distinction between the figure and the figurative, the figurative and the literal, the literal and the literary. His sculptural vocabulary is to be read both in the sense that it has been made legible by a host of post- minimalist sculptors, and as it derives from poetic narratives whose syntax consists of ideas and personal experiences rendered in discreet object form. It does not, however, function as hermetic, self-referential poetry as much as it does a rhetorical, bleak humor. Manders’ poignant object choices, in their references to office, factory, alley, laboratory, or cinderblock hut, conjure an all too familiar alienation, one that hints at Franz Kafka’s absurdist bureaucracy, George Orwell’s utterly instrumentalized humanity, the humorous, intellectual dry heaving characteristic of Samuel Beckett, or the wait for the Cermak Avenue bus somewhere between, say, Canal and Ashland. 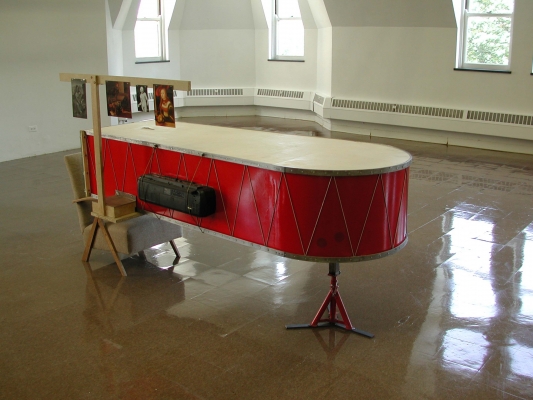