As A Matter of Fact

Historically speaking, Minimalism and Conceptualism are hard acts to follow. They represent a sustained effort to reveal the conditions governing the production, distribution, and ultimately, reception of visual works of art. These movements’ key figures were engaged in activities — language and photo-based practices, earthworks, artist books, site-specific installations — that defied, if not dismantled, the traditional categories of painting and sculpture. The de-skilling of artisanal labor, the dematerialization of the art object, and institutional critique represented something of a degree zero, as the artwork’s material basis and function became the subject of rigorous scrutiny. But to what extent would a subsequent generation of artists be comfortable working from scratch?

Brussels-based artist Joëlle Tuerlinckx is more than comfortable working from scratch. Given how little conceptual art has left to the imagination, Tuerlinckx is free to work with materials and situations that, for lack of a better term, are simply self-evident. Her installations feature numerous slide and video projections, often featuring footage, imagery and ephemera taken from the exhibition site. Tuerlinckx insists that conceptual art’s formal structures — the systems, seriality and analytic propositions used to generate its forms — remain empty. Within her visual vocabulary, books, vitrines, video monitors, and last but not least, the gallery space itself, are sculptural volumes doubling as voids of time and space. Rather than fill them in an obligatory sense, Tuerlinckx takes pleasure in their existence simply as formal structures, using them as occasions to point, to count, to measure. In short, her quirky installations use the gallery as a time and a space in which life, no matter how meager or ephemeral the object of scrutiny, can assume a factual certainty it may otherwise lack.

During a recent visit, Tuerlinckx was struck by The Society’s location within Cobb Hall, a University building whose classrooms are devoted largely to teaching undergraduate courses. The title of her exhibition, Chicago Studies: Les Etants Donnes [which translates as “that which is given”] Space Thesis, is a play on the building’s use as well as an announcement of her own formalist investigation of the gallery space including the administrative contents of its offices. In her words, “Space Thesis does not prove anything, instead it establishes, operates, connects data: data about things contained, co-existing in the same space, with the word thesis referring to practices and methods of training specific to institutions of knowledge.” This would allow Tuerlinckx to use a roll of paper towels as the standard of measurement when surveying the length of corridor leading into the gallery space, or to use a black plastic plate as a means to establish a sense of scale through the viewfinder of her video camera.

Tuerlinckx’s slide projections, some of which investigate the transition from the second to the third dimension, and others that feature bits of found language, display the integrity to ideas rather than objects that is a hallmark of conceptual art. Her installations recognizably quote the movement’s leading practitioners (Sol LeWitt, Niele Toroni, Hanne Darboven, Mel Bochner, Joseph Kosuth, Lawrence Weiner). Whereas conceptual art was often characterized as cold or clinical in its approach to its subject, Tuerlinckx’s work is quirky, if not outright absurd, as when she simply labels walls and open doors as such. This is in contradistinction to the famous painting by her Belgian compatriot, René Magritte that features the words “Ce n’est pas une pipe” painted above the image of a pipe. It is this type of wit, not to mention an interest in the relationship between forms of signification, notably the relationship between language and objects, that lends her work an affinity with that of Marcel Broodthaers.

It was the coming of minimal and conceptual art that led Broodthaers to frame twentieth century art in terms of loss. Poetry and the visual arts had been reduced to an impoverished semiotics of mere words and pictures, one now capable of serving as an illustration or example of the other, as in advertising. Tuerlinckx’s demonstrative labeling and signification of objects underscores Broodthaers’ prognosis. What empty egg and mussel shells were to him are perhaps what vitrines, books and monitors are to Tuerlinckx. Likewise, her simple felt-tip dot drawings, although they allude to the painted brush marks of, say, Niele Toroni, also read as an ellipsis declaring an omission. Her work, however, is not permeated with a sense of loss, but of deferral. “Later, Later” and “After Me, After Me” are phrases appearing in two of her most well known videos, suggesting that it is not a question of art’s fate after conceptual art, but life after conceptual art, which is to say life as simply a matter of fact. 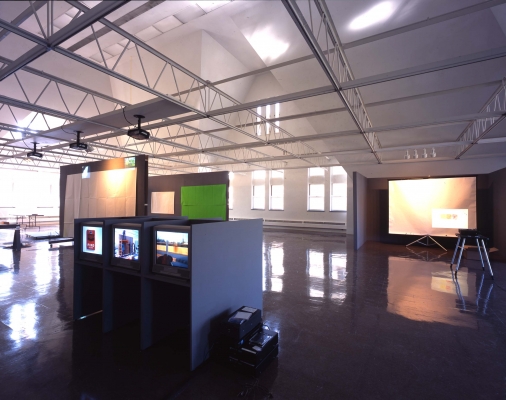