“How am I to speak of you as “tenant” “farmers,” as “representatives” of your “class,” as social integers in a criminal economy, or as individuals, fathers, wives, sons, daughters, and as my friends as I “know” you? Granted - more, insisted upon - that it is in all these particularities that each of you is that which he is; that particularities, and matters ordinary and obvious, are exactly themselves beyond designation of words, are the members of your sum total most obligatory to human searching of perception: nevertheless to name these things and fail to yield their stature, meaning, power of hurt, seems impious, seems criminal, seems impudent, seems traitorous in the deepest: and to do less badly seems impossible: yet in withholdings of specification I could but betray you still worse.”
—James Agee, Let Us Now Praise Famous Men

In 1936, a young James Agee was assigned to write an article whose subject was the sharecropper’s life in the Depression South. It was to appear in Fortune magazine. At Agee’s suggestion, the article would be illustrated with photographs by his friend Walker Evans whom Fortune had used before and who had become aquatinted with the region through his work for the Farm Security Administration. Agee and Evans spent part of July and August in Hale County, Alabama documenting with conviction the lives of three sharecropping families. Fortune declined to publish the article which one editor characterized as “pessimistic, unconstructive, impractical, indignant, lyrical and always personal.” Remaining deeply troubled yet inspired by what he saw, Agee developed the article into a book-length account published five years later as Let Us Now Praise Famous Men. Part prose poem, part ethnography, and part reportage, Let Us Now Praise Famous Men has since become a seminal literary and photographic document forming our most immediate impressions of the Great Depression. It yielded some of Evans’s most stark yet intimate work from that period including the well-known portrait of Allie Mae Burroughs. But despite its historical, geographic and biographical specificity, Let Us Now Praise Famous Men is something more than the portrait of an era. So strong are its images of rural life that they have become part of a deeper myth involving the fiber of the nation’s character. Evans’s photographs of sharecroppers become less specific and more emblematic of not only harrowing poverty but the farmer as the embodiment of an American roots culture, one expressed in those pious souls wed to the country’s soil.

Although Let Us Now Praise Famous Men has become folkloric, Agee’s question and insights remain of utmost importance to the work of Birmingham-based photographer Julie Moos (b. 1966). The Society is pleased to present Monsanto, Moos’s most recent series of ten, large-scale, color photographs of farm owners. In August of 2001, Moos photographed pairs of Northern Missouri/Southern Illinois farm owners - husband and wife, father and son, a pair of brothers - standing amidst their crops. The project was conceived and instigated by Moos during a residency at The Contemporary Art Museum, St. Louis.

In her last three bodies of work, Moos has developed a signature formal device of pairing her sitters centrally within the frame, arms casually by their sides, their faces relatively expressionless. Moos’s resolutely formal portrait practice betrays a confidence in photography’s status as an autonomous fine art, one capable of strict adherence to visual signification. But Moos’s practice goes further than indulging our desire to simply look at people, consuming them through their comportment. Her work allows us to compare and contrast individuals through a formalism that, to use Allan Sekula’s words, “neutralizes and renders equivalent” its subjects whose relationship is otherwise made clear in the series title whether it is the fierce competitiveness of the Hat Ladies (2001), the stark binary relationships that define adolescence as in Friends and Enemies (2000), or simply that of employer/employee as in Domestics (2000).

Moos applies this same device in Monsanto. But unlike her previous bodies of work in which the sitters were captured under clinical, studio conditions before a gray backdrop, Moos has moved her camera outdoors, placing each pair of farm owners in the center of a horizontal frame containing a generous portion of heartland prairie. The images are striking in their richness of detail, lushness of color and last but not least, their scale (6 feet by 8 feet) that qualifies them as both portraiture and landscape photography. But it is their simplicity that speaks the most.

The Monsanto series is not narrative but iconic. The decision to traffic in myth rather than photojournalism was determined less by Moos and more by a subject that when it comes to representation within the fine arts can only be engaged at the level of myth. Although Moos’s recent body of work partakes of myth, the Monsanto series is counter-myth whose status as such relies on a discourse established through a project such as Let Us Now Praise Famous Men. Unlike Evans, who thoroughly documented extended families, their homes, possessions and land holdings, Moos’s photographs are singular, the sitters are removed from their domestic environment and any suggestion of family is conjured through a discreet unit of two and not through a sprawl of relations. But more important, Moos was not accompanied by a writer. Although Agee and Evans conceived of their respective contributions functioning independent of one another, the interplay that results from reading word and image together is nothing short of what Evans’s biographer James R. Mellow dubbed a game of chicken and egg as each artist exhibits a wholesale investment in the descriptive powers of their medium.

But then again, Moos’s work is operating as counter-myth. Invoking the name Monsanto is enough to dispel any suggestion that these farmers might have anything to do with those depicted in Let Us Now Praise Famous Men. The farms which serve as the backdrop in her photos are many thousands of acres and the crops are the product of a multi-national corporation that is a leading producer of bio-engineered seeds whose yield although greater and impervious to pests is questionable as it relates to issues of biodiversity. In short, these farmers represent the agri-industry; they are the New New Deal. The images, however, are not simply counter-myth in relation to Evans’s sharecroppers. They radically revise another deep-seated stereotype. With nary an office tower in sight, not to mention suit and tie, Moos’s subjects give a new face to Corporate America.

Moos’s Monsanto series comes at a time of renewed patriotic fervor and anti-corporate sentiment. Her images of farm owners, however, deny us refuge in old myths that would serve both purposes. But Moos’s Monsanto series, like the Agee/Evans collaboration, is not an indictment. Despite structural shifts in the economy allowing the new myth of corporate culture to supplant an old myth of a nativist roots culture, both myths still abide by a national narrative built around a sense of ourselves as pioneers and settlers. Even under corporate aegis, our belief for better and/or worse remains that we are children of the corn (and soy) indeed. 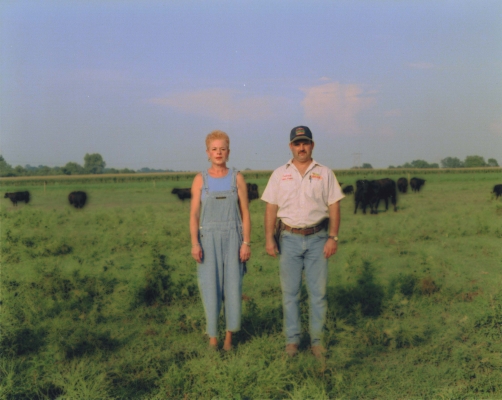