For his exhibition at The Society, Beijing-based artist Feng Mengbo has created Q4U, a customized version of Quake III Arena, the popular internet game whose plot is simply kill or be killed. Designed by id software, Quake is a follow-up to their hit game Doom, which alongside Mortal Kombat, both released in 1993, set new standards in video game violence. In Quake, scavenging for body armor, health capsules, ammunition and plasma rifles, is all part of the quest to kick as much ass as possible in a maze of intergalactic dungeons. Quake III Arena is written in open code, a feature that allows users to customize the game. Q4U, Mengbo’s customized version features a 3D likeness of the artist holding a video camera in one hand, and a plasma rifle in the other. There will be three play stations in the gallery and over the course of the exhibition; Mengbo will engage players via the internet. Given the dynamic audio-visuals of contemporary video games, Q4U is formally stunning. It is projected over three large screens (10 feet x 13 feet) each featuring a different point of view.

Initially trained as a print maker at the Central Academy for the Arts in Beijing, Mengbo began exclusively making digitally based work in the early 1990s. Since then his medium of choice has been the video game. Mengbo’s earliest video games were similar to those featuring the popular Nintendo character Mario comes again as Mao Zedong. The Long March Goes On (an excerpt of which is included on the tape) was designed by the artist using Aldus Graphics and elementary gaming software. It reinscribes the objective of the original Mario Brothers game within the contentious relations between China and the West. The goal of The Long March Goes On is simple, vanquish your enemies and capture the cola. Mengbo’s early games gained him a reputation as one of a new generation of Chinese “pop artists” to emerge after The Tiananmen Square riots of 1989. Indeed, over the course of his life - as a child of the Cultural Revolution and a young adult during the events at Tiananmen Square - Mengbo has witnessed oscillating degrees of openness between China and the West. As a result, his earliest video games are not simply an ironic commentary on Chinese Society, questioning the goals of revolution and modernization, but also a trenchant critique of opposing ideologies. These he feels are reduced and delimited value systems appropriate to the video game.

In 1997 he produced Taking Mt. Doom By Strategy as both a video game and a CD-ROM of animated collages combining family photos, snippets from the game and excerpts from The Taking of Mount Tiger, a 1970’s action film popular during the artist’s childhood that retroactively celebrated Mao’s Cultural Revolution. Taking Mt. Doom By Strategy was an attempt to insert something of both a personal and historical narrative into the space of the video game and vice versa. It was not until 1998 that the technology would allow this to be done on terms far less prohibitive than collage. The result was Q3, a computer generated video work Mengbo produced in 1999. Q3 is a video starring himself in the role of a war correspondent interviewing an avatar in the midst of a battle. The footage is a surreal, poignant and profound exchange on the nature of militarism and violence both real and virtual. At the conclusion, Mengbo decides to join the warring clones. Q4U is an interactive sequel to that narrative.

Although we have come a long way since GI Joe, have we really come that far from Pong? Aside from “kill or be killed” what protocol could govern the conduct of players from all over the world whose actions are delimited by what is essentially a binary system? In this respect, Quake, although it has taken the form of a violent romp, represents what the video game medium is, was and always will be at its core, winners/ losers, zeroes/ones. In any case, Mengbo’s philosophy of gaming is in the playing. He wants any and all viewers to grab the mouse and have fun. He is an avid gamer who boasts of having died a thousand deaths. Watching his character grunt, hurdle and return enemy fire, its obvious he can’t wait to die a thousand more. As for the rules, there are no rules. No manual needed. 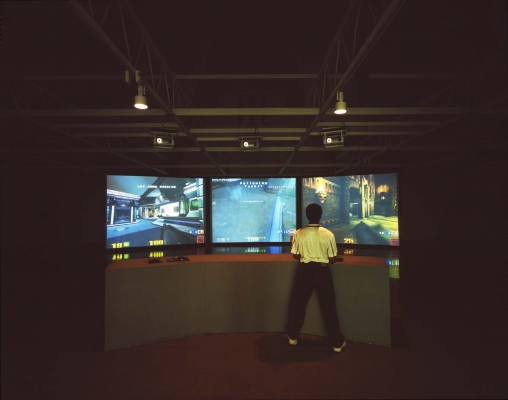