Spec is a collaboration between the artist-duo SIMPARCH (Steven Badgett and Matthew Lynch) and musician Kevin Drumm. As sculptors turned carpenters, SIMPARCH is known for its architecturally scaled works that are often wry commentary on conventional building practices. For this particular project, SIMPARCH was asked to address The Society’s unwieldy acoustics and create conditions favorable to the presentation of an audio work by Drumm who specializes in experimental and electronic music. SIMPARCH’s solution was simple but extreme: install a full dropped ceiling. But how low?

The sculptural component of Spec consists of a dropped ceiling arched to form a long, semi-circular barrel vault. Its hulking dimensions measure 10 feet in height, 20 feet in width and 72 feet in length making Spec a corridor-like room within a room that comfortably accommodates upwards of 80 people. Between the hundreds of foil-backed ceiling tiles, many yards of conduit, aluminum lighting canisters and an elaborate network of galvanized steel wire, Spec’s exterior—fully visible in the round—resembles a space station. Spec’s interior—accessible from both the east and west end—is a cool white tiled tunnel, a work of Robert Rymanesque formalism cum corporate sobriety. This relatively hushed environment is replete with recessed lighting and speakers running its entire length. As a sculptural volume, Spec creates tunnel vision. Perspective becomes an architectural axis of fate, one whose history extends from the Roman arch to the United Airlines Terminal all via the Quonset Hut, which, as humble Midwesterners, SIMPARCH cites as formal inspiration. With even more a wink and nod they also cite the Native American longhouse to which they pay homage through communal seating in the form of a 72-foot, wooden bench that bisects the space and doubles as the world’s longest subwoofer.

Spec’s functional demands are derived from the cerebral domain of listening. In this instance, Spec will feature a work by Kevin Drumm commissioned specifically for this structure and created in situ. Drumm, a Chicago native, is one of electronic and experimental music’s noteworthy talents. He has performed with ensembles of various sizes and has released numerous solo and duet recordings. His sensibility is rooted in an analytic approach to the broader electrified soundscape and is not confined to electronic music as such. Drumm began as a table-top guitarist. Laying the electric guitar flat on a table top, Drumm treated the instrument as a conduit for registering all manner of touch and the presence of its own internal electrical current. Amplifier buzz, hum, and static were the dominant part of his vocabulary making him is one of the few musicians for whom the addition of a laptop computer to his repertoire of instruments is in fact natural. Drumm’s skill as an improviser has earned him distinction within the field of electronic music. His sensibility may be analytic, but his findings are the result of a sensitive and subtle ear that transcends the divide between electronic and acoustic sounds. He brings his skills to group settings in a manner no different than any other musician. As an exhibition, however, Spec will be given over to the act of listening rather than performing. Just as Le Corbusier characterized the house as a machine for living, SIMPARCH characterizes Spec as a machine for listening, a Drumm machine in the truest sense. 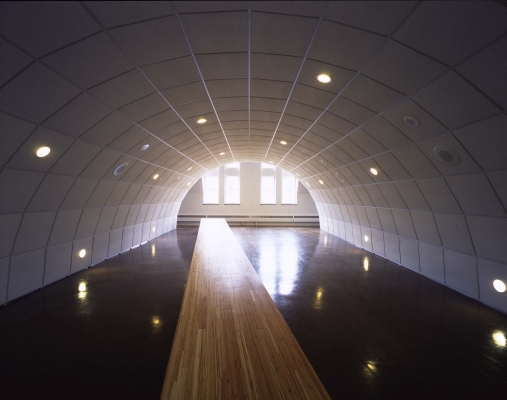