The buildings on a university campus are quite telling of the extent and manner that fields of knowledge are divided. The arts and letters, law, the sciences, economics, medicine - each has become a branch of knowledge independent of a common basis in humanist thought. This could not be more the case than with the fine arts and engineering whose relationship is not so much that of discreet branches as it is two entirely different trees. The fine arts and engineering do however meet etymologically in the word techne, the Greek root for technology. Unlike technology which broadly speaking is applied science, techne has subtle shades of meaning that encompass art, skill, craft, and building. Over the course of modernity, from the recovery of lost bodies of classical knowledge during the Renaissance to the scientific and industrial revolutions, techne shed its associations with manual production in favor of latent meanings brought to the fore by the machine age. The result has been a standing gap between art and technology that twentieth century artists negotiated with varying degrees of reconciliation. Although much is made of this gap, specifically its erasure by means of digital technology, the results of these negotiations do not reside in the virtual realm of the computer but the physical realm of sculpture.

Pairing artists from the beginning of this century with those from its latter half yields several paradigms for the development of twentieth century sculpture. From Marcel Duchamp to Michael Asher, for example, one could trace the history of modernist sculpture as it concludes in institutional critique. From the Russian Constructivists to the American Minimalists one could compare formalist concerns with the transition from the second to the third dimension. From Constantin Brancusi to Martin Puryear one could discuss organic abstraction and strains of anthropomorphism. Or, from Julio Gonzalez to Richard Serra one could consider industrial practices and methods of assembly as the logical heir to a tradition of direct carving and modeling. In any case, the paradigms for generating forms and organizing Euclidean space are often antithetical to one another. For example, the artisanal manipulation of traditional materials associated with organic abstraction (carving, modeling, casting etc. of wood, stone, clay, plaster, bronze) stands in contrast to such strategies as the ready-made or minimalist practices that use industrial materials and methods of fabrication. Over the course of his career, French sculptor Toni Grand has exploited the tension between nearly all of these paradigms, producing several bodies of work, some of which operate within a single paradigm and others, which mix and match practices.

Born in 1935 in the south of France, Grand gained critical recognition as a member of Supports-Surfaces Group, a French movement founded in 1970 which included both painters and sculptors among them Daniel Dezeuze, Claude Viallat and Andre-Pierre Arnal. As the title of the group suggests, their work drew attention to the relationship between the surface of an artwork and its traditional means of support. These formalist concerns were viewed as actual rather than metaphorical manifestations of late 1960s Marxist socio-political thought. In the case of sculpture and Grand in particular, the groups manifesto translated into an emphasis on structure, a sensitivity to a given material’s surface, a return to simpler means of craft, and above all, revealing the process of fabrication. The work Grand exhibited in the 1971 exhibition Mediums/Surfaces included a scatter-like installation of draped wire rods and lattice frames. These were to be his last works in metal for a decade. For the remainder of the 1970s, Grand devoted himself to working exclusively in wood. Grand’s splitting, slicing, joining, and shaping announced themselves as a decisive intervention, not imposition on the material. The work was not a clash between nature and creative will but rather a gentle give and take between the artist and the grain, knots and bark of the wood literally at hand. In 1981 Grand briefly returned to metal, producing a body of stacked and folded metal sculpture betraying minimalist bearings. By the mid 1980s, however, he revealed a disposition towards earlier strains of twentieth century organic abstraction with a series of indeterminate, polymorphous shaped works fabricated out of synthetic resin, wood and stone.

Between 1987 and 1993 Grand produced the work for which he is best known - open, primary, geometric forms (fiber-glass drums, rectangular aluminum frames, triangular saw-horses) that incorporate resin-dipped fish, mostly eels. A striking and eerie counterpoint to the industrially produced forms, the stiffened fish served as a unit of measure, determining the overall dimensions of a given work. Grand’s reduction of a living organism to a fossilized unit of measure reversed the romantic notion of sculpting as breathing life into noble but inert materials. Clearly for Grand, a sober reprisal of sculpture’s memorial function involves admitting that the materials are lifeless. His emphasis on retaining traces of the material’s organic origins, however, re-inscribes the art and technology divide onto the broader categories of nature and culture, specifically culture’s subjugation of nature.

For his exhibition at The Society Grand has produced two large works that focus explicitly on the divide between art and technology. Each work juxtaposes a piece of technology with a dense accumulation of irregular, hand-crafted, wooden loops - a motif Grand has used since the late 1970s. Regardless of the degree of proximity between the hand-crafted object and the technological ready-made, Grand insists that they occupy the same space so as to critically inform one another and suggest a broad range of relationships between the artisanal and the mechanical. In the untitled work the tangled mass of wooden loops is paired with a laser that emits a pale beam of emerald light across the gallery. The loops are amassed to form a large tumbleweed-like volume that lacks a structure-defining core. Despite their incongruity, the two components are complimentary in the manner they address notions of line, specifically the bearer of rational thought. Whereas the loops represent a material complexity verging on the chaotic, the laser beam represents an ideational purity verging on the transcendental. In Genie Super Lift Advantage the wooden loops are assembled using a hand-cranked fork lift which remains as a component of the work. Its mass of wooden loops recalls the shag of dried vines clinging to an old building. Unlike its untitled sibling, Genie Super Lift Advantage portrays the organic loop component as hopelessly dependent on its rather indifferent, erect mechanical counterpart which functions as a prosthetic device rather than an integrated skeleton.

The back of this poster features a parakeet’s nest that was constructed in a satellite dish near The Society. It bears striking resemblance to Grand’s new work. The parakeet’s choice of an antenna over the many nearby trees suggests that they have reached a conclusion similar to Grand’s, proudly juxtaposing their innate sense of techne against human technology. But the rate of technological advance and the subsequent discrepancy between art and technology, not to mention nature and technology, if not frightening to parakeets, is certainly intimidating to many a human. Along with our awe of technology is the sense that humanity risks estranging itself from the natural world through the brusque application of science. As a result, we often look to art for reassurance that we are indeed still at home on the planet and not strangers to ourselves. According to Grand’s new work there is hardly cause for alarm. Technology is perpetually domesticated, and like art, it too can serve as a critical reflection of subjectivity. Although the image on the back of this poster is one environmentalists might question, there is no denying that the parakeets probably get great reception. 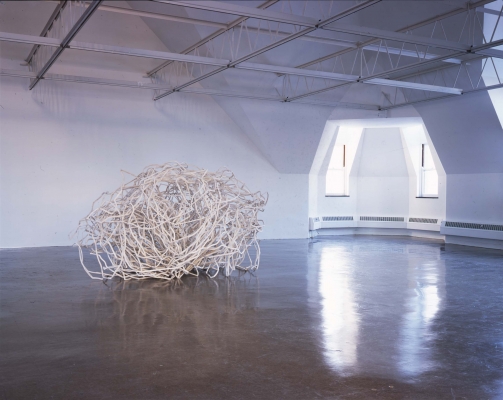