The Happy End of Kafka’s America

Given the many facets of his career, Martin Kippenberger (1953-1997) is a daunting figure to access, let alone assess. He was one of the most complex and prolific German artists of his generation. Initially trained as a painter, he worked in a wide variety of media including sculpture, graphic design and installation. He collaborated with dozens of artists and tried his hand at acting, writing, and for a brief period was co-manager of Sud- Öst 36, a notorious punk nightclub in Berlin. With a profound spirit of play, Kippenberger was a provocateur and fearless self-promoter, gaining notoriety for activities that by the mid-1980s resembled something of a latter century Cabaret Voltaire. Using himself as a prime example, Kippenberger’s subject was the fate of the artist in contemporary society.

Conceived as a joint exhibition in two venues, Martin Kippenberger: Hotel Drawings and The Happy End of Franz Kafka’s “Amerika” represents two significant bodies of work that contain the full range of ideas and sentiments that ran throughout his career. Kippenberger was extremely prolific, mounting hundreds of exhibitions around the world, which allowed him to become a consummate flâneur, roaming from city to city, hotel to hotel. During his travels, Kippenberger executed hundreds of drawings on stationery from numerous hotels. The David and Alfred Smart Museum of Art will present roughly two hundred of these “hotel drawings” (1987-1997) from private collections in Europe and the United States. Their style ranges from the collage aesthetic of Dada to the exquisite caricatures of Daumier, and their subject matter ranges from quick preparatory sketches for sculptures and installations to revealing self-portraits.

The Renaissance Society will present The Happy End of Franz Kafka’s “Amerika,” Kippenberger’s last work. Referring to a scene in Kafka’s unfinished novel in which the main character navigates a vast employment office, The Happy End portrays human relationships, social interactions and power dynamics through various styles and configurations of artist-customized tables, chairs and bleachers arranged on an Astroturf soccer field. Both the hotel drawings and The Happy End reveal Kippenberger to have been capable of making himself vulnerable. By the end of his life, he produced a body of work that was at once absurd, hopeful, tragic, charming, silly, bleak and touching, offering a telling critique of the artist at the end of the 20th century. 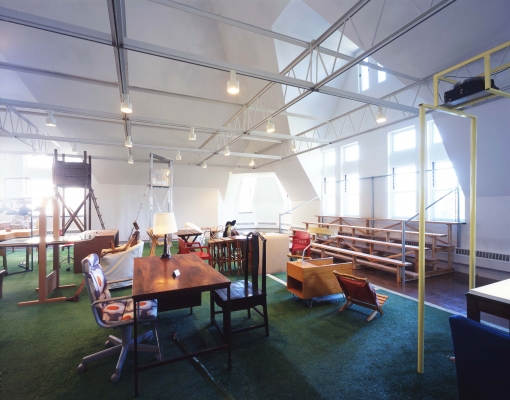