Written by Franz West for his exhibition poster.
Words in capital letters are titles of the sculptures in the exhibition.

Pre-semblance and the Everyday(1)
(As a political expression, this page was printed w/o blue)

The viewer may examine the installation from any vantage point as if stepping into Oo Fifi, Diana Thater’s video installation of Monet’s garden at Giverny. One should also consider the following passage from Michel de Certeau: “Their story begins on ground level, with footsteps. They are myriad, but do not compose a series. They cannot be counted because each unit has a qualitative character: a style of tactile apprehension and kinesthetic appropriation. their swarming mass is an innumerable collection of singularities. Their intertwined paths give their shape to spaces. They weave places together. in that respect, pedestrian movements from one of those ‘real systems whose existence makes up the city.” They are not localized; it is rather that they spatialize. They are no more inserted within a container than those Chinese characters speakers sketch out on their hands with their fingertips. It is true that the operations of walking on can be traced on city maps in such a way as to transcribe their paths (here well-trodden, there very faint) and their trajectories (going this way and not that). But these thick or thin curves only refer, like words, to the absence of what has passed by. surveys of routes miss what was: the act itself of passing by. The operation of walking, wandering, or “window shopping”. that is, the activity of passers-by, is transformed into points that draw a totalizing and reversible line on the map. they allow us to grasp only a relic set on a surface of projection. Itself visible, it has the effect of making invisible the operation that made it possible. these fixations constitute procedures for forgetting. the trace left behind is substituted for the practice. It exhibits the (voracious) property that the geographical system has of being able to transform action into legibility, but in doing so it causes a way of being in the world to be forgotten.(2)

The exhibition begins with HOMEPAGE. This series of collages is based on junk mail hung outside my studio door at navel height. The studio is on the top floor of a palais in the center of Vienna. There is a very good (north) light and one can soak up the crowd on the street. The street in front of my previous studio was either dull and empty or contained a convoy of roaring, stinking cars. But here there are many shops with display windows full of souvenirs—folkloric costumes and other gross clothes and dresses, confectioneries with Mozartball chocolates and marzipan potatoes. GUSSFORM: the red hot splatter suggests the casting of molten metal.

Street musicians pursue their fate or fortune. One of them sits near the building entrance blowing on a flute IL CONDOR E PASA a la Ravel’s Bolero from 4:00 to 8:00 pm (also my best working hours). Next to him, a small dog in a fancy costume. Perhaps the musician can play nothing else. A passer-by probably doesn’t note the endless repetition which for me rings throughout the studio where I form the JE NE SAIS QUOI—fine art. (During summer, when it is too hot, the windows must be opened. The air conditioners are also loud and make my eyes tear.)

I have received an offer to present a sculpture in the display window of a nearby jeweler—KNICK. LIKE MIKE was titled after a visit from Mike, who stood next to this sculpture and made note of IL CONDOR E PASA as it emerged from nearby. Afterward it seemed that the sculpture somehow looked like him, somehow felt like him.

Nagging impressions, DER SCHNEE VOM LETZEN JAHR (THE SNOW FROM LAST YEAR—OLD HAT), an idiomatic expression referring to something that announces itself as new but is in fact uninteresting because it has been there all along(3), like the recent repetition of the “Lemur Heads”.(4) During the last several months of production, there were numerous campaign ads, posters dominated by portraits of merry neo-nazis. Impressions of them can be found in the LEMUR HEAD. This version harbors a plastic bottle in its mouth, a depository for piss. (An elaboration on the utility of this project is still pending.)

SMART: It is chilly, autumnal. The windows are closed. The street music has faded, becoming idle. Time for contemplation. Indeed, once again the residue of banal thought: a Smart Car would be very practical here in the narrow streets, and also suitable for parking in the courtyard of my palais. It goes without saying that the sculpture is not a copy, rather an idea of the car, which is nonetheless a useful object.

NUEROSE: In the middle of my life to date, when I began making color studies, I continually came across a very washed out pink called Altrosa (Old Rose) on color charts. Freshened up, glowing, it would need to be called Neurosa (New Rose) which easily associates with neuros (neurosis).

JAN HOET: Across from my house, next to several bad restaurants, there is a hat store with a display window full of hats. What association emerges when observing so many hats — Jan. In German, the word for hat is pronounced ‘hut’, Jan Hoet’s family name.

Possible sources of these sculptures could be Baudelaire’s Fleurs du Mal, Chagall, or Huysmans’ Des Essentes (orchids, upon contemplation, appeared to him as prosthetic legs). And with this, I’m falling into a position similar to my music videos. The videos were meant to illustrate poses and uses for my first sculpted forms, the PaSstueckes (Adaptives), which you can handle and pick up, gesticulating as you like. Like consecrated wafers, they titillate both bourgeois and subversive characters.

HARKE: In a catalogue, I recently saw a painting of blue grapes on a yellow background by Hans Haacke (translator’s note: Harke means rake in English and is pronounced similar to Haacke.) Finally, reference should again be made to Certeau’s insight: “The elite upset about the ‘low level’ of journalism or television always assumes that the public is moulded by the products imposed on it. To assume that is to misunderstand the act of ‘consumption’. This misunderstanding assumes that ‘assimilating’ necessarily means ‘becoming similar to’ what one absorbs, and not ‘making something similar’ to what one is, making it one’s own, appropriating or re-appropriating it. Between these two possible meanings, a choice must be made, and first of all on the basis of a story, whose horizon has to be outlined. ‘Once upon a time….”(5)

P.S. The last and only time that my sculptures fell into the floral and sentimental was at the time of my beloved brother’s death. This time it is the accession to power of a new government in Austria. Vienna is for me, unfortunately, a Psychotope on which I depend (just as Beckett, in his Proust biography, compares the latter’s description of the life of the soul with the life of plants, or as Hegel notes, that roses, in spite of being so pleasant, thrive splendidly in both horse and pig manure.) This ‘short diary’ is a way of understanding this exhibition.

Last but not least, the PLEONASMES: these sculptures have neither label nor designation, they are interchangeable and should be of the same size since others can take their place. Interact with them so as to make them resonate for you.

Certeau was quoted often because I frequently thumbed through the pages of Arts Des Faire (The Practice of Everyday Life) while writing this text. I bought this book because its cover goes so well with the design of my favorite cigarettes, Hint of Mint.

(1) The Frankfurt School used “pre-semblance” in the sense of a halo’s glow, announcing something about to appear, a “pre-appearance” and art as the pre-semblance of utopia.

(4) Viennese intellectual jargon, a teasing accusation. (For the Roman saturnalia, lemurs were the evil spirits of dead ancestors.) The opposite of the vulgar insult “Sauschaedel” or “Pigskull.”

(5) From: Michel de Certeau, Chapter 12, “The Ideology of ‘Informing’ Through Books.” 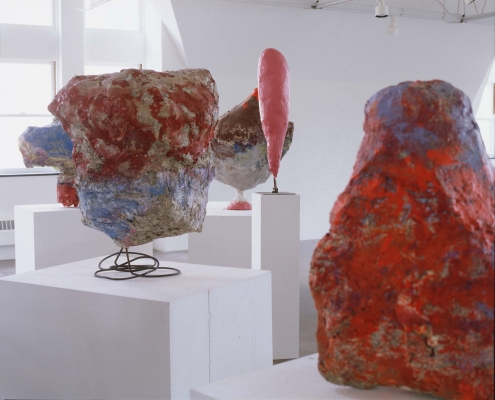