From eighteen to twenty-eight
of his years
a young man schools himself, argues, debates, trains,
lectures to himself, teaches himself Swahili, Spanish,
learns five new words of English everyday, chain-
smokes, reads, writes letters. In this college of force
he wrestles bitterness, self-hatred, sexual anger, cures
his own nature.
—Adrienne Rich, An Atlas of the Difficult World

Perhaps you know Rich’s young expatriate. Maybe he is a dear friend. Or maybe he was the exchange student in your college dormitory. Maybe he was your cab driver. Or maybe a colleague’s husband. Although this passage seems to refer to someone specific, it is actually a portrait of anyone who, for some time in their youth, has experienced the predicament of being a foreigner, either by choice, by necessity or some soluble mix of the two. Rich’s portrait does not dwell on the high drama of displacement as much as it captures the banal yet potent frustrations that come with being a stranger in a strange land. Between the lines is a sense of longing that solicits sympathy from anyone who has experienced even the briefest bout of loneliness while traveling. This passage’s final sentence, however, casts it as an intense psychological sketch of alienation to be sure. What began as an attempt to alleviate alienation through the rigor of study ends on a cool note of personal hostility. This, one senses, is a consequence of being denied the pleasure of an intimate and casual sharing of self.

No matter what it takes, Moshekwa Langa is determined to avoid the fate of Rich’s young expatriate. “Moshekwa! Live and In-Person.” This could very well serve as the title of a recent series of photo-based self portraits featuring the artist sans shirt and shoes in a variety of action-poses-shameless, silly, sexy, sentimental and some, just plain nonsensical. But compared too much of the photo-based, gender and identity work of the past few years, Langa’s photos are a critical camp redux. No costumes, no makeup, and no production values to speak of, these photos are “Moshekwa! Unplugged.” The only props in the nondescript interior include a black leather couch which he occasionally straddles and a microphone at one point offered to the lens in a gesture that is at once unabashedly erotic and at the same time an endearing invitation to sing along. Did Langa execute this body of work because or in spite of the inescapable matrix of cultural codes that accompany the black male body? In either case, the honesty, and aggressive charm behind his performance are a surreal view into the sparsely populated, karaoke bar of the artist’s mind.

Born in 1975, Langa is a native of South Africa currently residing in Amsterdam. His work, amongst many things, explores the poetic aspects of expatriation. He is a restless scavenger, working in no single medium, using materials at his immediate disposal. Langa’s installations juxtapose any and all media. Video, photography, drawing, painting and sculpture are employed strictly on an as-needed basis. The Mountains of My Youth is the work for which he is best known. It is an installation featuring two components: hundreds of yards of string strewn about the floor so as to create the irregular and complex intersection of lines on a topographical map and a series of collage/drawings that incorporate maps, signs, and fragments of text occasionally in different languages. A mixture of styles resembling the work of many of this century’s best scribblers (Cy Twombly, Jean-Michel Basquiat, Bill Traylor, Louise Bourgeois), these works are strange, urgent acts of communication belonging to someone desperately in search of an Esperanto of a private rather than a public sort.

For his exhibition at The Society, Langa has designed an installation containing the full range of his work-paintings, drawings, photographs, sculpture and video. These will be accompanied by a new body of work that consists of a series of 16 banners each approximately 10 feet x 6 feet. They will feature symbols that continue his search for a private Esperanto in which poetry and politics, public and private exchange meaning freely. Langa’s collage aesthetic, his mix of any and all media, could be read as a response to the conditions of belonging to a Diaspora. Langa’s abandoning of mastery and master narratives in favor of such strategies as appropriation and fragmentation reflect less a point of origin and more the instability that comes with a radical change of place. For artists of his generation, the world is a ball of string with neither its beginning nor its end anywhere in site. It is a monotonous series of windings creating elaborate connections between people and places accompanied by an equally elaborate set of thoughts and longings. If Langa’s disparate and desperate practices constitute an atlas of the difficult world then his is an invitation to join him in the streets of the universe, now! 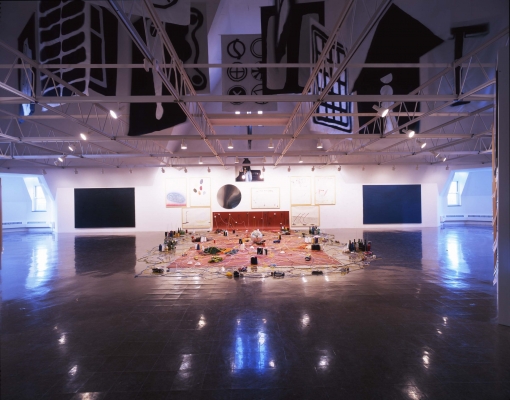