Language, Race, Religion, Soil. When mixed together in the wrong proportions, the ingredients for nationalism can become a recipe for conflict. At least one, if not all, of these components is the source of tension in the troubled nation-states of Africa, Southeast Asia, the Middle East and Eastern Europe. Whereas the social dimensions of place are susceptible to the same migratory patterns of the people inhabiting a given geography, soil still remains the basis for homeland. Needless to say, strong sentiments over a particular piece of the good earth have made definitions of nation-state conservative by default. However, in the face of an increasingly global, post-agrarian economy, the longing for patria has become a somewhat displaced romantic construct. What lies behind many of these struggles is an unjustifiable and literally ungrounded nostalgia. Nowhere is this more the case than in Northern Ireland, the home of photographer and video artist Willie Doherty.

The tragic history of this tiny portion of land is much larger than its geography implies. Although 1969 marks the date of Northern Ireland’s current “troubles,” assigning a genuine beginning to the conflict is impossible, for it has a sedimentary history. Repeated failure at resolution has become violence that is institutionalized politically and, over time, socially. Whether it is a photograph detailing the corrosion surrounding the bullet holes in a car door, the rusted shell of a fire-bombed automobile, a weathered cement roadblock, or an abandoned roll of chain link fence, the narratives embodied in the artifacts Doherty documents have become chillingly commonplace. Set within Ireland’s idyllic landscape, these artifacts also attest to Ulsterization, special military measures meant to rid urban areas of the Irish Republican Army. The search, seizure and internment tactics used by Northern Ireland’s militia not only generated a great deal of sympathy for the IRA, it also made Northern Ireland’s rural countryside the site of guerrilla warfare, giving a whole new meaning to the expression “political scenery.” Whereas the conflict operates as a conservative, idealizing force in the representation of Ireland as a land worth fighting for, Doherty’s work counters the myth of the fighting Irish with traces of that very reality. Vehicles abandoned by the roadside late at night, lone boot prints in the mud, and car tracks that veer off the road into a verdant nowhere, Doherty’s work quietly but provocatively documents evidence of the violence that has transformed Ireland’s bucolic landscape into a site of unease.

The conflict, however, only reinforces what was already a deeply rooted nostalgia. Since the 1850s Ireland’s population has steadily declined. Exile and emigration are, in fact, the true source of the Irish landscape’s symbolic value. A tradition of exodus has resulted in a neo-romantic sense of homeland, making Ireland, in part, an invention of those who left. Between its politically charged present and its tradition of exodus, Ireland comes across as a law-less, but nonetheless, picturesque frontier whose myths are imbued with traits similar to the American West. In True Nature, Doherty has shifted his focus away from the ashes of conflict harbored by the Irish landscape, toward a nostalgia constructed by both its current residents and a Diaspora several generations removed. Doherty’s installation is a five part video projection of footage shot in Chicago and Ireland. It is accompanied by an audio track derived from a series of interviews with Chicagoans of Irish descent. The multiple viewpoints and fragmented voices refer to historical experience that through re-telling exists only as myths. These in turn become insepa- rable from perceived and imagined personality traits and wider national characteristics. A landscape of violence, a landscape of violent nostalgia… (Sigh) The Beloved Country. 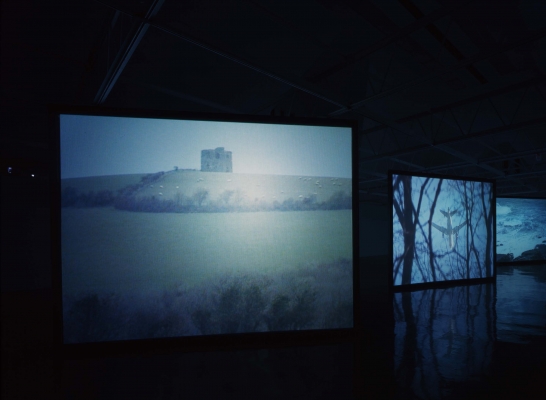