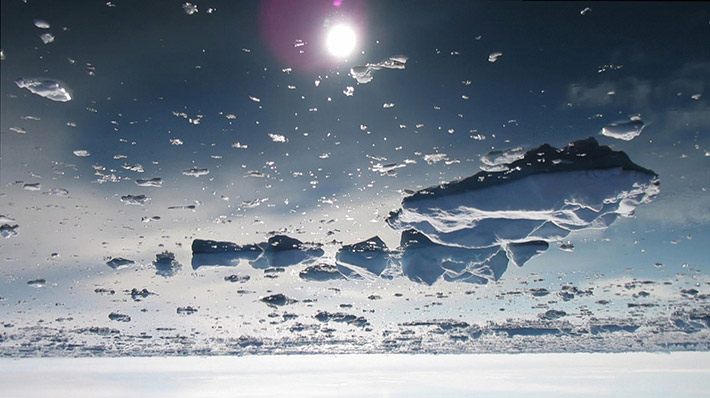 An exhibition is a spatial environment of its own, outlined by its architecture. Without these bounds, Unthought Environments could have expanded to include a wide range of projected videos and films that delve into related subjects.

The Renaissance Society’s website offers an alternate platform to highlight a selection of these moving image works, which will be viewable online here for a limited time. The videos featured here further extend the horizons of the show, suggesting a number of additional pathways back out into the world.

These videos were available to view online for the duration of the exhibition, February 17–April 8, 2018.

Edgardo Aragón’s video centers on an area in Mexico where infrastructural vulnerability, “forces of nature,” and incursions of corporate power converge, to the detriment of the communities there. An area hit heavily by hurricanes, Cachimbo, on the border between the states of Oaxaca and Chiapas, has to rebuild its infrastructure every year. The Mesoamerican Integration and Development Project, a multimillion venture financed by the United States, has invested in infrastructure, electricity, and transportation systems in the region, but corruption has funneled most of the benefit to foreign companies. Although Cachimbo is near one of Mesoamerican power plants, it has no electricity supply apart from a fragile solar power system. In the video, Aragón travels to Cachimbo, passing through a landscape of wind turbines that send their power north to Oaxaca. He brings with him a battery charged in Oaxaca, a gesture that returns the electricity to the community in Cachimbo, where it should have stayed.

With an understated touch of science fiction, Ursula Biemann’s video essay juxtaposes the science of geology and climatology with human history. The video unfolds across the Subatlantic, the latest climatic phase of the Holocene that began about 2,500 years ago and has registered major civilizational changes. The voiceover alludes to a she-scientist who is making instrumental observations about a changing environment around the last glacial melts. From an increasingly submerged place of oceanic observation, her objects of examination are as much the physical world and the atmosphere that is engulfing her as the thoughts that are formed, reconfigured or released under the changing conditions. Subatlantic also refers to the submerged space of the Atlantic Ocean. Set in the Shetland Islands, Greenland’s Disco Bay and a tiny Caribbean Island, the video implicates far apart locations that are connected through ocean streams, addressing submerged dynamics that are non-localized and invisible to our eye.

Dissolution (I Know Nothing) offers a backdrop for a number of Cohen & Van Balen’s recent projects, including the works in Unthought Environments. The footage used in the work composes a form of seascape, assembling fragmented connections through material and time from Congo, Rwanda and Nigeria through the Indian Ocean on a containership to China. Gunpowder, dissolved minerals, blinking LEDs, personal and colonial histories. All that is solid melts into flow.