Generationally speaking, Christina Mackie (b. 1957) is the child of a robust 1970s pluralism, a moment when the scope of artistic practices was irrevocably broadened. After studying painting at the Vancouver School of Art, Mackie went on to do graduate work at St. Martins College of Art in London, where she currently resides. In the wake of Minimalism and Conceptual Art, negotiating the ramifications of the credo that any and everything can be art fell particularly hard upon the shoulders of Mackie’s generation, one for whom the term post-medium has proven apt.   Mackie’s oeuvre is a heterogeneous mixture of making and appropriating. The things Mackie makes (ceramics, watercolors, collages, assemblages, videos, photos, computer generated graphics) openly fraternize with the quotidian. Her works, best characterized as arrangements rather than installations, are occasionally punctuated with simple, unaltered functional objects from her immediate environment. To refer to them as readymades would be overstating the case, for the work is not engaged with the kinds of critique that designation suggests. Hers is a relatively humble practice, one whose range of media is responsive to the waxing and waning of the artist’s thoughts, moods, perceptions, and concerns, all of which are subject to the time and place Mackie may find herself. Inspiration can be drawn from near or far, from the natural world or the built environment, from the recesses of memory or the matter literally at hand. Although the work is arguably more poetic in effect than intent, Mackie is one to see a mushroom cloud in a jellyfish.   Mackie is a scavenger admittedly susceptible to animism. Things speak to her, be it a feather duster purchased in a Karachi market or a piece of flattened, distressed metal plucked from a busy London thoroughfare. As she said in a recent interview, “Truth to all junk!” Part of her creative impulse is fed by listening to what manner of alteration, if any, an object might suggest. Heeding a found object’s call for legibility may even entail giving it a face, as is the case with The Trestlepeople series (2012). Mackie’s practice is also very craft-oriented. In her previous body of work, small Informel ceramics and watercolor drawings shared truss table space with mounds of colored sand made from pulverized minerals. The result was an object lesson in the triangulated relationship between the creative urge, natural form, and the transformation of earth-based materials. In her newest body of work, Mackie’s preoccupation with objecthood has likewise given way to more rudimentary considerations of matter and materiality, a key characteristic of which is color.   Although Mackie formally abandoned painting decades ago, she remains a resolute colorist, drawn to watercolors for their material transparency as the pigment retains its mineral quality. For her, color is a substance and not a secondary attribute of form. The title of her Renaissance Society exhibition, Colour drop, refers to the prominent role pigments and dyes play in her new body of work, which features glass, textiles, ceramics, and her signature gesso-coated panels. As this list of materials suggests, color in, on, and as matter is inextricable from such ancillary properties as transparency, opacity, texture, and reflectivity.  For visual artists, color is the subject of theory, but in an empirical sense. One experiments with color not to understand its rules but its possibilities as concrete, tangible matter on the one hand, and as a perceptual phenomenon on the other. Mackie’s interest in color is somewhat paradoxical insofar as her decision to abandon painting should have been synonymous with abandoning color. In a trajectory from, say, Seurat to the Washington Color Field School, color became the holy grail of modernist painting, making it impossible for Mackie’s generation to discern baby from bath water. What then was the fate of color independent of painting?   Sidestepping modernist painting’s reductivist logic left color open to the ramifications of the readymade where its reification would become a more complex negotiation. Under the readymade’s auspices, art would have to share the province of color with the world of things at large. Based on her use of everyday objects, Mackie accepts this conclusion. In contrast to her earlier exhibitions, here Mackie is not using everyday objects. For Colour drop, Mackie’s interest in the world of things at large has been restricted to a limited palette of materials that are strategically arranged and juxtaposed.   Still, Colour drop is anything but a formalist investigation of a clinical sort. While the work certainly qualifies as an investigation, it is decidedly wayward. Mackie’s channels of thought are never direct and she is certainly not immune to chance operations. Even more importantly, she is not immune to chance operations over time. In her work, color is the active and operational agent. It interacts and it changes. Just as her process involves the manipulation of materials, it also incorporates residual elements (rust, dried pigment) whose coming into being, through sedimentation and or oxidation, occurs unassisted over time. The same can be said of the provisional manner in which she juxtaposes materials: even if not a waiting game, she nonetheless engages in a form of play where the combination and recombination of elements is played out for the sake of seeing what happens. 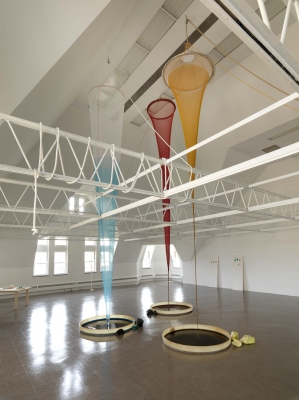