The term correalism expresses the dynamics of continual interaction between man and his natural and technological environments.
—Frederick Kiesler, Architectural Record, September 1939

Instead of coining a new term, artist and architect Frederick Kiesler (1890-1965) could just have easily used the word culture. In so far as it signifies the adaptation of natural resources toward human ends, culture encompasses our necessities — food, clothing and finally shelter. Not only does culture in its broadest sense have everything to do with our sense of place or environment, but in a binary scheme where the natural and built environments are polarized, culture is the grand mediator, the bridge which reconciles the two. Historically, however, Kiesler is a relative latecomer to discussions regarding the relationship between the natural and technological environments. His decision to coin a new term reflects the extent to which a more general, philosophical dialogue regarding culture had been given over to the concrete reality of place as it relates to issues of architecture and urban planning. From Laugier to LeCorbusier, from William Morris to Mies van der Rohe, in one form or another, discussion about the relationship between the metropolis and the natural world has been taking place since the middle of the 18th century. Although it is the natural world which accommodates the built environment, a reconciliation between the two required that the hierarchical host/guest relationship between nature and culture either be affirmed or undermined as the built environment expanded to take on a logic of its own making its relationship to the natural world increasingly abstract. Attempts at making amends between the two worlds have ranged from a reduction of the city to an organic phenomenon by couching its industrial aspects within a rhetoric of nature, to an unabashed celebration of its technological feats aimed at controlling if not outright conquering the natural environment. Neither a proponent of mythical nature, nor a celebratory technocrat, Kiesler’s search for a middle ground involved introducing the terms of health and decay into progressive design practice. In assigning architecture responsibility for the de- and (re)generation of man in an evolutionary cycle of needs, Kiesler was raising the issue as to how modernity would age. Although his search was for a design that wed the natural and technological in complimentary rather than subordinate terms, modernity’s ruins are certainly not a spectre to be feared.

For Spanish sculptor Cristina Iglesias, the absence of modernity’s ruins is somewhat conspicuous. Although her work often invites comparison with minimalist sculptors such as Carl Andre or Richard Serra, a more rewarding comparison comes by way of the works consideration as architectural fragments. Works such as the expansive Untitled (Hanging Tilted Ceiling), with its delicately-cast impressions of the undersides of mushrooms, or the two rooms containing aluminum monoliths cast after eucalyptus vines and a bamboo thicket, have as much if not more in common with art deco wrought iron work or the ornamental friezes of Louis Sullivan or Frank Lloyd Wright which were modeled after natural motifs, as they do with any minimalist work. Iglesias’ elegant fragments are characterized by a provisional autonomy. They often rely on the features of an existing space to gently propose openings or silent interiors that in the wake of minimalist and conceptualist practices address modernist memories of place. A delicate arch of slivered alabaster that creates a fragile, shallow shelter of pale light, or a long metal monolith whose bow eclipses the rectilinear perspective of a room; in so far as these works are objects they also act as the contingent walls and ceilings of open-ended spaces which, like the hollow obligation of suggestion, could easily disappear.

Between the real spaces of architecture and the illusory spaces of painting, however, modernist sculpture has had to face questions regarding its relationship to site lending it an even greater parallel with architecture. Whether it is the pedestal, the park, or the corporate plaza, twentieth century sculpture has had to define itself primarily in relation to place, a preoccupation that links minimal and conceptual site-specific practices of the late 60s and early 70s with an older tradition of civic monuments. Outside the creation of honor/memorial works, the issue of site went ignored well into the twentieth century. The history of twentieth century sculpture, from Constantine Brancusi to Michael Asher, from the autonomous object to a critique of context, is also a journey from pedestal to place, and in particular the social dimension of defining place. But a history of sculpture that privileges context as justification for an artwork’s reason for being is a history that threatens sculpture with its dissolution into the formal and social dimensions of its location. In short, sculpture runs the risk of disappearing relegating the freestanding autonomous artwork to the status of ruin.

Iglesias accepts the trajectory of modernist sculpture as it coincides with that of the ruin as simply a quiet fait accompli. If definitions of sculpture rest with the conventions of Euclidean geometry, then over and above defining sculpture within a system of objects, contemporary sculpture must define itself through if not against the parameters of place established by both painting and architecture. In an untitled work from 1987, Iglesias combined a steel and cement fragment from an arch, a sheet of plate glass and a tapestry depicting a pastoral scene. This work openly acknowledges that sculpture has been threatened with its obsolescence since the development of the transparent picture plane over 500 years ago. The exhibition opens with Untitled (Diptych IV), a two-dimensional work that features a silk-screened photograph of a sculptural model of an architectural structure defined by colonnades. Establishing a sense of deep perspective through the procession of columns is a pictorial device which dates back to the invention of linear perspective and the transparent picture plane. Like the untitled work from 1987, this untitled diptych reaffirms that sculpture finds itself in a nebulous zone somewhere between illusory and real space.

Although one is tempted to call the empty space between shirt and shelter nowhere, in it lies a vast amount of potential. Iglesias speaks of using sculpture to translate that which was previously a metaphor into an actual phenomenological experience. The works which exemplify this most succinctly are those which use colored glass to project pale stains of light into their makeshift grottos. This same effect occurs in Untitled (Alabaster Room) in which the ambient light of the gallery precipitates into a modest glow on the works supporting wall. Aside from the wall there is nothing there to catch the light. Although a form or volume is suggested, the subtle relationship between the wall and the delicate alabaster frame, is shallow enough, or better shy enough, to remain simply a void of soft light. What would normally be a sculptural presence is actually a beautifully framed, and in this instance, illuminated, absence. This same sense of absence exists to an even greater degree in Untitled (Hanging Tilted Ceiling). The works only real presence is its tactile quality. It refuses to disclose its means of support thereby confirming any mass and it asserts itself strictly through the space or void beneath it.

Untitled (Jealousy), is the exhibition’s only freestanding work. Its title is a pun on “celosia,” which in addition to meaning jealousy also refers to shuttered window covering. Like many of her other works, Untitled (Jealousy) contains a skewed perspective, not only in that its sides are not perpendicular to one another, but also in the angle of the geometric forms whose slant controls the eye’s access to what is on the other side. The play between the various geometric patterns recalls the ordering of the natural world through a principal of variety through repetition. Although the permutations of thin wooden slats locked within the hexagon is fixed, the combination of angles becomes a code which verges on becoming a discernible alphabet.

The story of sculpture’s vagrancy, its disappearance and or displacement as recapitulated in Iglesias’ works, reiterates the polarization of the natural and built environments. Iglesias’ sculptures often capture the scope of the modernist sublime from its romantic origins, with its illustrative worship of nature, to its formalist conclusion marked by the development of abstraction, best exemplified in sculpture by minimalism with its emphasis on what architectural theorist and historian Manfredo Tafuri calls the “universe of precision.” But in the face of strategies ranging from informel to institutional critique, reintroducing the formalist and romantic sublime on architectural terms could hardly be said to constitute a radical response to a rationalist domination of space. Iglesias, however, wants to suggest the displacement, not the dismantlement, of beauty and the sublime as they are signified by the natural world and reified abstract values. The untitled work which features a motley combination of cement, tapestry and aluminum reveals an architectural history which is compressed, or in this case repressed, between the slabs of cement and the white wall. Whereas the tapestry suggests an attempt to add warmth to the walls of a castle, a bit of cozy aristocratic regalia, the polished aluminum surface which distorts the tapestry, recalls the chilly noblesse oblige of a corporate lobby.

Iglesias’ comfort with sculpture’s vagrancy as well as her deference to architecture are not as benign as the formal elegance of her work would have us believe. Iglesias’ return to the romantic and formal sublime reiterates our utopian aspirations for sites that provoke critical reflection about our relationship to nature. Discussions about the disintegration of public space, which emphasize cause rather than effect, have generated an overwhelming ambivalence toward these aspirations. We readily acknowledge that spaces made for us physically have become spaces made against us psychologically, yet, we are unable to imagine an antidote. It has become hard to determine if we fear or crave the intimacy meant to fulfill our misplaced utopian longings. By interjecting in real time and space the forgotten aspirations of the modernist sublime, Iglesias works against this ambivalence. Posing as enlarged but fragile fragments dependent upon an existing framework, Iglesias’ work candidly reconsiders nature and culture’s guest/host relationship. Iglesias inverts the values of place and no place as they are inscribed in the terms culture and nature. The no place of nature no longer accommodates the place that is culture. Instead, it is culture which has come to accommodate nature. It is no longer simply an image of the ruin in the English garden, but an image of the ruin in the garden in the city. Rather than celebrate the vast but incorporated wilderness bound by the sharp thin lines of an accurate map, Iglesias prefers to reconstruct the shallow mysteries of partial places whether these places reference architectonic spaces of a man-made or organic sort. By introducing these elements as architectural figments and fragments, Iglesias’ extensions and alterations often suggest a beautiful in-between or a temporary but quite consciously introduced nowhere in the middle of somewhere. Too gentle to constitute a rupture, too formal and restrained to invite fanfare or mourning, Iglesias work has instead opted for an intelligent, sober poetry that offers a peace of mind with a piece of place.

Space, however, is not the final frontier; it is the perpetual frontier. If our aspirations for public space are a memory, it is because they have been supplanted by a new form of space, electronic space, which represents the age-old dream of dematerialization, of being magically transported to another place. It may seem radical to juxtapose Iglesias’ work with the telephone, television, and finally the computer, but the fact that these devices have relieved our physical ground plane of uniting us makes Euclidean space little more than a dinosaur. If the class of objects known as sculpture offers itself up as a ruin, then it does so gladly at the hands of Iglesias. Her works leave one with the feeling of being haunted by a very peculiar absence. Then again if sculpture has exhausted the power of presence then maybe its high time that the full power of suggestion kick in. 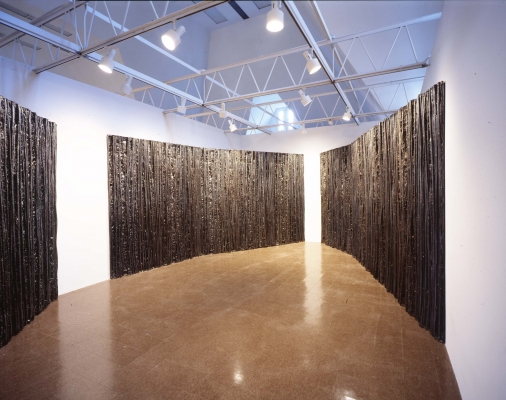