Of course buildings stand, but what do they stand for and how do they stand for something? To put it very broadly and bluntly, architecture is a physical fact. But it is a particular type of fact, not to mention feat, that transcends its materiality. In housing a given social function, architecture comes to articulate that function. The designs of our banks, homes and shopping centers reflect their functions, allowing us to make distinctions between places. As the physical entity given to discreet social and economic functions as well as forces, architecture is also the most affirmative act of communication. Architecture acquires meaning by virtue of its role as a sign, making it a form of representation. But unlike other sign systems, architecture starts with a hole in the ground, making it the gravest form of representation. Sign and the signified are wed with cement and it is with a fair amount of certainty that we are allowed to say a bank is not a church. As an articulation of function and by extension necessity, there is an irresistible element of truth in architecture, an utterance or final statement of sorts that is presumed to be singular.

Architect Ben Nicholson has never shared the presumption that there is a truth in architecture. Throughout his body of work, from his collages to his full-scale constructions, Nicholson has been multiplying rather than fixing meaning within architecture. The modernist architectural maxim, form follows function, derives its rhetorical strength from adhering meaning to necessity. For Nicholson, this strength has been exhausted, freeing architecture of its obligation to contain and secure the necessities in life. This, however, does not displace but rather disperses both the function and meaning of architecture. Necessity is no longer the end which justifies the means or meanings of architecture but instead, necessity becomes part of the conspicuous cycle of consumption, a cycle defined by growth, use, production, disposal and decay. In designing a home, Nicholson is just as likely to take his cue from something as insignificant as a bread tag as he is from a computer-generated spreadsheet giving him an up-to-the-minute financial profile of a potential client. Although Nicholson’s architecture is admittedly one based upon the fragmentary and the arbitrary, his projects challenge necessity in order to re-evaluate many of the basic philosophical tenets of modern architecture.

Whatever happened to sacred geometry? Although elaborate designs and patterns are now thought of as an ornamental display of surplus labor, there was a time when they operated as a form of representation. For just over a decade, Nicholson has been conducting intensive research on the floors of the Laurentian Library, which was commissioned by Pope Clement VII in 1523 and designed by Michaelangelo. Nicholson attributes the design of the floor’s fifteen spectacular mandalas directly to Michaelangelo. Part of this exhibition will include reproductions of several Laurentian Library floor designs in the form of six large paintings. For Nicholson, the intricate play with numbers, used to generate the floor’s interlocking shapes, is shorthand for all the world’s knowledge, making the Laurentian Library a masterpiece of meaningful architecture.

A house is not a home. It’s an appliance. This is what Le Corbusier meant to say when he stated, “A house is a machine for living.” Nicholson’s most fully realized project, aptly dubbed Appliance House, takes Le Corbusier at his word, literally, metaphorically and philosophically all at once. In the Appliance House, form not only emphasizes but exaggerates function. One of the Appliance House’s six rooms, the Kleptoman Cell, has been constructed and will be on display at The Society. As a room whose sole function is to act as a container for items of the utmost value whether sentimental or practical, the Kleptoman Cell is an attempt to realize an architecture that reflects the fact that we are what we own. An elaborate squirrel’s nest verging on the surreal, the Cell’s final design is determined by collages representing the real and imaginary relationships between objects hidden behind the Cell’s walls.

While his projects are a pointed and poignant critique of a culture of industrial excess, Nicholson’s engagement with architecture can be considered theoretical only if it is first acknowledged as philosophical. If his logic and interest appear fragmentary, it is because they are situated within a very grand scope. The entrance to Nicholson’s exhibition will be graced with the shredded remains of a B-52 bomber, a reminder that architecture must share the witness stand with destruction when testifying on behalf of civilization. But this logic is subverted as the icon of nuclear destruction has itself been violently dismantled. It is precisely this type of thinking, not to mention the multiplication and dispersion of meaning, that allows Nicholson’s work to be discussed within the context of Deconstruction, an architectural movement that crystallized over the last fifteen years. But Nicholson’s work assumes rather than illustrates the premises of that movement. For, Nicholson, uncertainty within architecture is an invitation for forays into the imagination and a chance to seize upon unrealized possibilities. Of course, a bank is not a church, but that should not stop one from thinking that it could be. 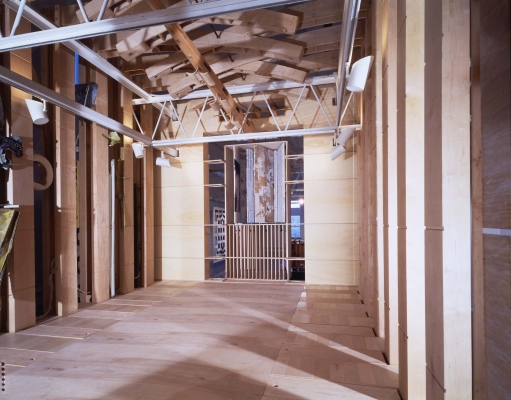