I am what I am

The word “I” is a very convenient construct. It is the most basic representation we assign ourselves. As an utterance directly related to its speaker, “I” is a tidy form of closure. When we say “I”, the many ways we describe ourselves are subsumed within a singular physical self, a body on which one’s nationality, sexuality, ethnicity, race, religion, class, and gender happen to fall. It is this singular “I” around which we construct our identity. But unlike “I”, identity is not a singular notion. As a combination and variation of numerous social, biological and psychological traits, one is and can be many things. The quest to better understand one’s self, to locate a root cause for one’s manner of being, does not end with the discovery of essential characteristics. These simply become the terms from which we begin to negotiate and challenge our place in the world.

The signifiers of self quickly form a chain whose links are thought to be inextricable. It is not so much the links themselves but their relationship to one another, particularly their order, which has recently been called into question. The relationship between gender and sex is a perfect example. The terms sex and gender are often used interchangeably. But if we recognize male and female as biologically determined and therefor part of a natural order, and the terms masculine and feminine as social designations, then an important distinction can be made. When sex and gender are interchangeable, our social designations are presumed to be an extension of a biological or natural order. Where masculinity and femininity reside, however, is relative, in which case male and female are not always equated with those terms in a respective manner. Rather than rely on a natural order to secure their meaning, masculinity and femininity can be applied according to the context.

Although the discrepancy between sex and gender has a strong presence throughout persona, the possibility to become Other exists for all aspects of one’s being. According to the findings of these artists, “I” ought to be reconsidered, not so as to replace it but to better understand it as containing shades of “we.” With this in mind, Popeye would surely have to lengthen his tautological epithet to “I am what I am but that’s not all that I am. I am much, much more.” 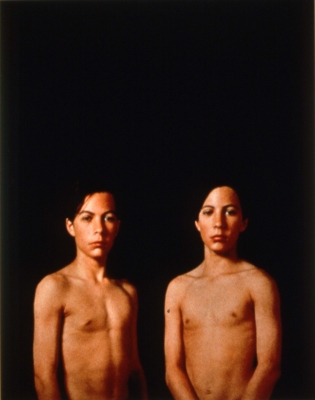