Gérard de Nerval (1808-1855) was a French Romantic writer, poet, translator and seminal precursor to a proceeding generation of symbolist poets including Rimbaud, Verlaine and Mallarmé. Nerval’s Daughters of Fire (1854) was a compendium of prose works and a group of eight sonnets collectively known as The Chimeras. The book’s preface was addressed to his friend Alexandre Dumas, who, in his journal Le Mousquetaire, caricatured Nerval, portraying his method of writing poetry as that of an obscurantist crackpot. The Chimeras were Nerval’s defense. Although Nerval had been institutionalized, the highly allusional character of his poetry was not to be mistaken for a delusional state of mind. He admitted his poems were resistant to explanation, for they “would lose their charm” if such “a thing were possible.” Nerval sought the transmission of feeling. As a Romantic, turbulent emotion, aroused by love and death, were Nerval’s stock in trade. His is a surge of imagery, inner visions, Delphic in content and delivery. His references to Classical mythology, however, were not to the exclusion of national lore or biography. In addition, he believed poetry had the power to link the natural to the spiritual and divine worlds, requiring that he draw upon a range of religions and mystical beliefs. What Dumas mistook for spontaneous free association, Nerval described as a “state of supernaturalist reverie.”

Not surprisingly, among the many poets Nerval influenced was the founder of Surrealism, André Breton (1896-1966). The word “Surrealism” was chosen as a name for the movement out of homage to the deceased Guillaume Apollinaire who is credited with coining the term. In the First Surrealist Manifesto (1924), however, Breton stated that “with even more justification” in deference to Nerval, he could have designated the movement “SUPERNATURALISM.”

Is Katniss Everdeen a daughter of fire? Nerval would definitely dig the bow and arrow. And given the eclectic nature of his female pantheon, it is safe to say she would rate. The Hunger Games’ central protagonist, along with the likes of Harry Potter, Sookie Stackhouse, and Isabella Swan, have heated a market demographic to the degree that young-adult-fiction (YA) is a force driving the publishing industry. Based on their bottom line figures, it is hard to believe teens were once an underserved audience. Furthermore, in going from page to screen, YA has transcended the word to become image, exponentially increasing its market share within popular culture.

Publishers have dubbed this a new golden era in YA literature, the first belonging to the 1970s whose best selling authors included Judy Blume and V.C. Andrews. The market had its ups and downs until 2000, at which point it increased only to soar. No less pluralist than literature in general, YA encompasses a variety of genres that in addition to romance includes horror, fantasy and science fiction. With an expanding readership, publishers more than welcomed various permutations of its genres. Under these circumstances, the hybrid Teen Paranormal Romance practically served itself up.

Paranormal is arguably already latent within the designation Teen Romance, whose characters negotiate libidinal forces as if they were indeed supernatural. But “Boy meets Vampire,” even if written for teens, is consumed by a much broader audience. Industry analysts estimate that more than half of YA’s readership is over the age of 18. Publicists account for this by citing YA as the place where, regardless of the protagonist’s age, the best and most adventuresome storytelling is taking place, which may very well be the case. But as part of a larger popular culture, the intensification of adolescent drives cannot help but serve as a crystalline cypher for the panoply of ideological positions, from revanchist religious, economic, and sexual politics to Libertarian fever-dream apocalypticism. Undergirded by the internet and social media, it has become a highly self-conscious genre that, if anything, revels in our meaning-making machinations.

The surfeit of CGI fantasy has made the unconscious an all too palpable entity whose existence no one questions. Instead of emerging from deep within the psyche, Nerval’s “state of supernaturalist reverie” would be more familiar today as something along the lines of Game of Thrones. More important, the latter day migration of Surrealism’s psycho-sexual content to screens big and flat corresponds to its having been purged from an autonomous, i.e. abstract, art. A key strand of modernism, Surrealism nonetheless represents a content of which an autonomous art steadfastly rid itself. Art with a capital “A” could then be accused of having abandoned the unconscious.

Between its palpability within the realm of popular culture, and its abandonment by visual artists, the unconscious, as an internal psychic space is a derelict playground where there are no children, only weeds. As for the art surveyed in this exhibition, what sprouts in the wake of a YA driven media zeitgeist are the tough and wild seeds of incidence, seemingly at home with trash and chainlink. Surrealism may blossom, but rest assured it was not planted, which, as it relates to the unconscious, is as it should be. The unconscious is known in effect rather than intent. Despite its construal at the hands of YA, the unconscious is a natural, not a supernatural force. Given the connotations a term like “supernaturalism” has today, Breton can rest easy in his grave, having made the right choice, lest he prefer the scent of today’s teen spirit. 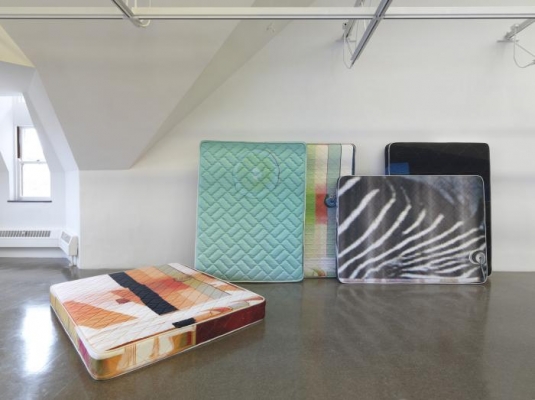