If seeing is believing, then investigations into the way we look at things, literally things, are always welcome. The world as a visual phenomenon is composed of variations on such formal elements as color, shape, size, pattern, texture and surface. Despite the ease with which this is stated, issues regarding perception have been the domain of philosophers and artists throughout history. But it is not so much a question of how we look at things as much as how our eyes distinguish between things. Plane/Structures modestly recognizes this system of visual differences in order to examine the act of seeing.

While much contemporary art theory and criticism has focused on how a viewer interprets or produces meaning about an artwork, little attention has been given to the precognitive aspects of the viewing experience. Discussion about what is seen is merely the foothill before one reaches the mountain of meaning. In this relationship, perception is subordinate to cognition, i.e., seeing is simply a vehicle for knowing. But artists are all too aware that the ability to interpret a work or produce meaning is dependent upon what is seen. Much of an artist’s job is to more integrally wed perception and cognition. An artist’s efforts to heighten our perception are an attempt to lend more depth and breadth to our cognition. Artists often hope that new modes of perception will translate into new forms of understanding. This last leap, with its shift in emphasis from cognition to perception, represents one of the chief characteristics of a purely formal abstract art.

As one of the key developments in twentieth century art, abstraction has not so much evolved as it has acquired different meanings at different times in different places. From the theosophical and spiritual leanings of Kandinsky, to the transcendental ideals of Mondrian and Malevich, to the Jungian psychoanalytic and later existentialist musing of the action painters, to the earthly and deadpan logic of the minimalists, the history of abstraction is nothing short of a full blown discourse. For better or for worse, there is a conspicuous and intimidating slagheap of rhetoric surrounding abstraction. Not that the artists in Plane/Structures would mind, but the production of purely formal abstract work need no longer be justified with reference to science, religion, philosophy or music. For the artists in this exhibition the rhetoric has been shed in favor of the more sober task of engaging perception. Given that their precursors are the original California Light and Space artists, the decision to investigate issues of perception, plain and simple, is something to which many of these artists are heir.

Southern California is known for many things, but being culturally conservative is not one of them. If anything, California markets itself as perpetually new, always welcoming people and ideas only to transform them beneath the rays of a never dull sun. This transformation is certainly evident in the popular but nonetheless true scenario of art movements as they make their way from the east coast to west coast. Concentrated in New York, the wealth of arts activities and movements throughout the sixties and seventies was never really mirrored in California as much as it was altered by the legendary landscape. In looking at the work of Ed Ruscha for example, the debt to Pop and Conceptual Art is settled with an adroit, albeit sardonic survey of the Southern Californian terrain by way of its gas stations, swimming pools and ranch style homes. The same comparison can be made with respect to the original California Light and Space artists. Including the likes of James Turrell, Robert Irwin and Maria Nordman, the California Light and Space artists were part of the sixties boom in site-specific art practices. Just as Ruscha’s observations of the Southern California landscape served as a cultural critique somewhere between Conceptual and Pop Art, the observations of the California Light and Space artists were in keeping with the highly contextualized minimal and conceptual works of the sixties and early seventies.

As is the case with other highly contextualized practices of the sixties and early seventies, clearly identifying a second generation of artists loyal to the findings of the first is difficult if not futile. The artists in Plane/ Structures, while in many ways indebted to the California Light and Space artists, are in no way a movement or their direct progeny. Moreover, Southern California, as the home of Hollywood, has produced a number of younger artists whose work operates largely as a form of cultural critique, placing formalist explorations well outside the spotlight. Yet Plane/Structures quietly appends Kandinsky’s Point, Line, Plane with such elements as color, pattern texture, surface, edge and support.

Much of the work in Plane/Structures is marked by an austerity typical of artists interested in an examination of purely formal issues. A forthright visual pleasure or indulgence in being seen, qualities associated with decorative work, are absent from the exhibition. A gaze looking to be sated in this manner will have to temporarily alter its diet. There is something cool at work in the paintings of John M. Miller, nothing like the white-hot thrill associated with Op art. The visual weight and orientation of the black and beige dashes make ones eyes feel as though they can only brush the painting in one direction. Reading them in the opposite direction is like brushing suede or velvet against the direction of the light. In relation to other works in the show, Miller’s paintings are quite generous in providing visual stimuli. The dashes however are subject to such a strict and simple binary pattern that the works still qualify as austere.

A more telling example of austerity is the recurrence of monochromatic paintings. The monochrome actually has a fate strikingly similar to that of abstract art. As a strategy adopted by dozens of artists throughout the twentieth century, the monochrome is very chameleon-like. A monochrome’s significance depends upon the artist responsible for its production. Of the sixteen artists in the show, seven are represented by strictly monochromatic works. The works of Pae White, Maxwell Hendler, Carolee Toon, Scot Heywood, James Hayward, and Alan Wayne, although clearly meant to complement each other formally, come from very different places conceptually. Free from symbolic content, Maxwell Hendler monochromes provide a respite from any cognitive and interpretive schemes. Language recedes to the far shores of memory as one stands before Inordinate Orange, an appropriately titled vibrant orange monochrome with a deep reflective surface. In contrast, Scot Heywood’s Untitled #64, a diagonally-hung, sectional black monochrome, is meant to provoke a sense of mortality, a sentiment quite fitting for the monochrome given its stance as a reductivist ultimatum.

The end however is a relative concept and James Richard’s work picks up where many of the monochromes have left off. Falling somewhere between painting and sculpture, Richard’s works expose painting’s conventional means of support; pigment applied to canvas mounted on stretchers hung on a wall. While there is no shortage of gestures aimed at deconstructing painting, what many of them lack is humor. Richard’s untitled works are caricatures of threadbare paintings which have been overanalyzed or subject to too much rigorous viewing. What would have acted as a paint surface is worn through to reveal a chaotic matrix of threads. The tension between surface and support is also taken up by Liz Larner in Wrapped Corner, a work comprised of dozens of 90-inch lengths of steel chain links. For her, tension creates order. These kinds of simple but nonetheless rewarding visual contrasts and comparisons run throughout Plane/ Structures.

The infamous stereotype of California as being a little less anxiety-ridden than the rest of the country seems applicable to Plane/Structures. While a reductivist stance is often exploited for its associations with a dread or anxiety about approaching certain limits, the artists in Plane/Structures use it to clarify their position and concerns. In establishing a simple system of visual differences from one work to the next, Plane/Structure quells the need to justify abstract work, preserving language and meaning for some rainy day. 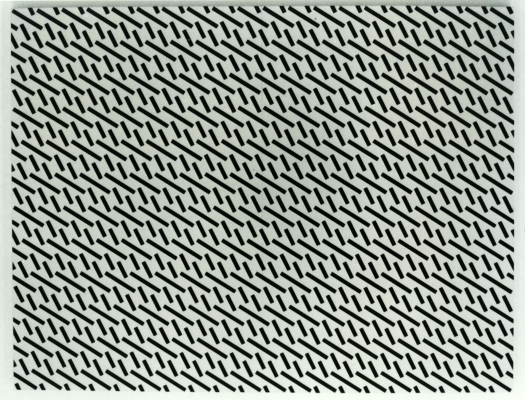