[This work] constitutes a comment on the passing of time and the possibility of erasure and disappearance, which involves a poetic space…[it] also touches upon life in its most radical definition, its limit: death. As with all artistic practices, it is related to the act of leaving one place for another, one which proves perhaps better than the first.
—Felix Gonzalez-Torres, 1990

Recognizing that string of moments known as a life is to acknowledge that forever is an absurd and remorseful concept. As proof we need only consult our memories. Forcing the viewer to this critical, almost metaphysical state of reflection is the imperative running throughout the work of Felix Gonzalez-Torres. A pile of candy, a stack of paper, a string of lights; as simple as they may sound, these are the raw materials Gonzalez-Torres uses to address such complex themes as private and public, history and memory, and love and loss.

In keeping with many artists of his generation, Gonzalez-Torres, who was born in Cuba in 1957, appropriates the strategies of the previous generation of minimal, process and conceptually based artists. But unlike his contemporaries, who are perhaps wary of the past, Gonzalez-Torres seems to feel at home with his predecessors’ strategies, using them as a means towards a more personal and poignant end. Gonzalez-Torres would hardly disagree with Richard Serra about the importance of such formal issues as weight and count. While for Serra these issues become an end in themselves, for Gonzalez-Torres weight could refer to his own or perhaps a lover who has lost several pounds. This is the case with the piles of candy whose weight is derived from someone of personal significance to the artist. Rather than use the notion of counting or the grid in a classical geometric sense as would Sol LeWitt, Gonzalez-Torres prefers to use them in a current medical sense as in Untitled (Bloodwork, Steady Decline), a series of graph drawings depicting a steady decline which perhaps references a waning T-Cell count.

Although his work is not without irony, Gonzalez-Torres’ use of the immediate art historical past is anything but ironic. Minimal, process and conceptual art were not only a challenge to artworld conventions of the late sixties and early seventies, but they also served as a challenge to the next generation of artists. These movements critically addressed issues surrounding the nature of the art object, its context and its relationship to the viewer. Rather than ignore the findings, and reject the challenge put forth by these movements, Gonzalez-Torres responds with a critical integrity.

Given that time is at the heart of Gonzalez-Torres’ work, minimalism and process art are the perfect vehicles for his practice. Duration, or the artwork as it is experienced over time is one of minimalism’s hallmark features. Minimalism was predicated on a viewing subject who perceptually consumed the work and in doing so was made aware of their own physical presence in relation to the artwork. Through the isolation and articulation of subtle perceptual phenomena, minimalism forced the viewer to arrive at an unmediated present or a here and now with little if any reference outside of itself. The self-contained drama of the minimal artwork, its promise of an eventual present led critic Michael Fried, in a now famous essay entitled Art and Objecthood, to compare minimalism to theater. As if affirming Fried’s charges, Gonzalez-Torres has used two of his works, Untitled (Go-Go Dancing Platform) and Untitled (Arena) as stage sets for performances. More to the point however are Gonzalez-Torres’ paper stacks and candy piles in which viewers are invited to help themselves to a print or to enjoy a piece of candy. The instability and impermanence of the work are immediately exposed as the work is literally consumed. With the disappearance of the artwork looming, the concept of presence is radicalized as it is brought face to face with its opposite, absence. For Gonzalez-Torres, calling attention to the mortality of the work, the possibility of its absence as it is consumed over time is crucial for an understanding of presence.

Art historical references aside, Gonzalez-Torres has a profound respect and consideration for his audience and is extremely concerned with beauty, pleasure, and poetry. Members of the audience who accept Gonzalez-Torres’ gifts as in the paper stacks and candy piles, are no longer viewers but participants in a cycle of accumulating, depleting and replenishing, a cycle which is none other than life itself. When receiving a gift, the recipient is likely to be asked, “What did you get?” Gonzalez-Torres knows that the real question is, “What did you give?” Was it like a piece of candy, a brief but discreet moment, enjoyable from beginning to end, or were the moments of exchange more intangible, ephemeral, and far too many to count? And if one is unable to somehow mark the instance of exchange, then what constitutes a moment? Such is the possible flow of thoughts when standing before a beckoning pile of candy or while observing the gentle billowing of white curtains.

From moment to moment, here and now, there and then; for an exhibit of work which evokes these thoughts, what more appropriate title than Traveling? Besides, how could a discussion of time not involve space? Far less grandiose than the notion of a voyage is the metaphysical sense of the word traveling which is simply movement through space. Even at that, its most mundane definition, traveling is still laden with metaphors about the nature of life, particularly life as a perpetually transitory state of being. Gonzalez-Torres has in fact used the title TRAVEL for a pair of simultaneous gallery exhibits in Paris entitled Travel #1 and Travel #2. Travel #1 contained two billboards both installed inside the gallery, one featuring a view of a turbulent and brooding sky, the other an image of lone bird, photographed from below, floating effortlessly beneath an overcast sky. One of several works in Travel #2 was Untitled (Passport #11), a stack of passport sized booklets featuring the same imagery as the billboards in Travel #1. Like his other stack pieces, viewers were invited to help themselves. As the artist has stated, “they are passports without name, gender, address, or ethnicity.” Clearly not meant to verify our identity, these existential passports are more a testament to simply being. As bell hooks has written:

Gonzalez-Torres gives us a passport with no place for irrelevant details; where we were born, in what country, dates, and numbers. A passport of dark clouds, of birds in flight, moves us to a space beyond history, a space of mystery where there is no record, no documentation, nothing to recall. What is captured here is a moment of utter oneness where the experience of union, of perfect love, transcends the realm of the senses. No boundaries exist. There are no limits.

In addition to exhibiting Untitled (Passport #11) at The Renaissance Society, Gonzalez-Torres has arranged to have 5,000 of these poetic passports mailed out as invitations for this show.

But in Gonzalez-Torres’ work, politics are in no way forsaken for poetry. Throughout the 1980’s Gonzalez-Torres was a member of Group Material, an artist collaborative devoted to political activism. Gonzalez-Torres has stated, “aesthetics is political”, and in viewing the body of his work there is a seamless transition from the poignant to the political. His practice allows for both elements to exist in a complimentary manner within the same work and at the same time re-emerge from work to work regardless of form. This is the case in one of his untitled billboard projects and Untitled (Go-Go Dancing Platform), both of which are deceptively simple and direct in examining the relation between public and private. As an object displayed in a gallery space, Untitled (Go-Go Dancing Platform), simply consisted of a pale blue platform, big enough for a lone dancer, with a string of bare bulbs running around its top surface. At unspecified times throughout the exhibition, a dancer would perform atop the platform to music only he could hear via Walkman, creating a spectacle in which the audience, severed from the performer, was reduced to strictly a viewing public. In one of his untitled billboards, Gonzalez-Torres chose the soft inviting image of a bed with two pillows, both fresh with the imprints of their users’ heads. Placed in several locations at once, this work unabashedly signified public recognition of private acts. As the artist commented in an interview, “Someone’s agenda has been enacted to define ‘public’ and ‘private’. We’re really talking about private property because there is no private space anymore. Our intimate desires, fantasies, dreams are ruled and intercepted by the public sphere.”

It almost goes without saying that the current issue for which not only the theme of public and private but all of Gonzalez-Torres’ themes achieve their greatest significance is AIDS. Gonzalez-Torres is frank in admitting that his work is driven by and derived from personal experience. As a gay man whose work is suffused with time and the nature of being, AIDS is an unavoidable specter. But the references are not direct. If they were, Gonzalez-Torres would not achieve his goal. In bringing the viewer to an awareness of what constitutes being, whether through a reflection on death or through joy wrought from the simplest thing, Gonzalez-Torres’ works are ultimately an affirmation of life. 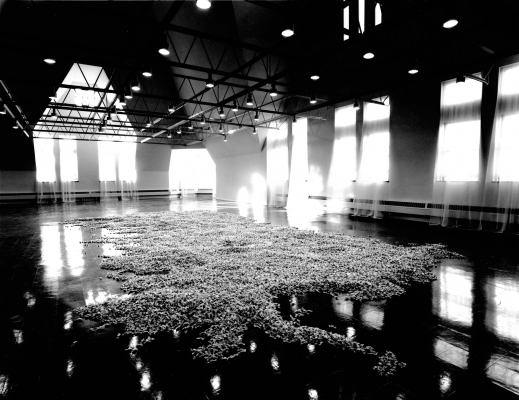