Narelle Jubelin’s Trade Delivers People installation for the 1990 Venice Bienale brought her work to many people’s attention. Later this year she will participate in exhibitions in Lisbon and Madrid, and over the past few years has exhibited in the UK, Austria, Hungary, the United States, and Japan.

Trade Delivers People specifically addressed the notion of cultural “exchange,” and the way in which the materials and philosophies of local cultures can become globally transported, commingled, and perceptually distorted. This happens in translation, and in the process of their becoming (or being rendered) a foreignism.

This transformation of an object or information through its exchange is not only a subject of Jubelin’s work; it is literally embodied in her petit point renditions of culturally significant material. The petit points are often situated, much like the structure of a sentence, amongst objects selected to represent a material culture. These assemblages of objects and sewn historical material form truly complex works, conceptually rich and sexually evocative.

The irony of such time-consuming and seemingly inconsequential labor is a fundamental component of much minimalist and conceptualist art, and is of critical significance to women artists including Jubelin and her petit points. Where repetition in the work of Chris Burden or Bruce Nauman has been seen as being heroic or profound, for women artists this repetition is often deemed appropriate. For such artists as Hanne Darboven, Eva Hesse, Agnes Martin and Jackie Winsor the silent Zen of manual repetition is undercut by our culture’s willingness to see that repetition as an accurate symbol for the role and place of women in society.

Jubelin’s work contradicts an easy conflation or dismissal as “women’s work” through several subtle but key formal decisions. Increasingly Jubelin’s sources are mediated through contemporary archival technologies - for example, photographic image banks or microfilm holdings in libraries - which Jubelin further mediates, or re-articulates, in petit point. Her dexterity serves to not only “slow down” these familiar, instantaneous and globally transmitted images but also to reconnect them to the mind and body, and the realization of thoughts through written images and spoken words.

Narelle Jubelin’s exhibition at The Renaissance Society, titled Soft Shoulder, revolves around The Magic of America, an unpublished four-volume manuscript written circa 1947 by Marion Mahony Griffin:

She was the longest serving, if intermittently employed member of his [Frank Lloyd Wright’s] staff prior to his departure for Europe in 1909. With the publication of Wright’s famous portfolio Ausgefuhrte Bauten und Entwiirfe in 1910, her work became known in America and Europe, although she was not to receive any widespread recognition until much later. As a most gifted delineator, Marion Mahony had prepared many of the drawings for the plates that were included in the folio. Walter Griffin had also been a member of Wright’s Oak Park Studio and in 1911, following a protracted and reputedly chaste courtship, Mahony and Griffin were married. Together they entered the international competition for the design of a Federal Capital City at Canberra. In May 1912, they heard that they had won the competition and the course of their lives was irrevocably changed. Shortly after they left the United States for Australia.

Walter Griffin’s death in 1937 in India interrupted the expansion of their architectural practice, as well as their notions of progress and democracy that came with it. The Magic of America is compiled in two slightly different versions, neither of which can be determined to have preceded the other. One is held in the collection of the Burnham Library of the Art Institute of Chicago and the other is part of the New York Historic Society Archives, now in the collection of the Grey Art Gallery of New York University, where Jubelin’s exhibition will also be exhibited in January of 1995.

However addled and ultimately unpublishable The Magic of America may be, it contains the foreign correspondence, insights and repressed anger of a woman who spent the bulk of her professional life collaborating (subordinately) with her husband and other men. This is particularly evident through her expressed antipathy for Frank Lloyd Wright.

In the manuscript Marion claims to have altered many of Wright’s drawings to her own liking unbeknownst to Wright (in her mind because he lacked the subtlety to notice the difference). Other even more derisive observations, or any review references linking the Griffins’ practice to Wright’s have been blackened out in her papers. Several of these sections have been rendered in austere petit points by Jubelin, the mode of the renditions metonymically acknowledging her reading of the manuscripts through microfilm within the libraries’ archives. Unlike previous works the imagery is partially visible beneath the sewn surface, rather than constructed stitch by stitch, like a photographic composite.

This project marks a departure for Jubelin in that the idea of international trade and cultural transcription is subordinate to the personalized issues that plagued Marion Mahony Griffin. And while the importation of the Prairie School to Australia is certainly a subtext of this project, Marion Mahony Griffin is its leitmotif. Jubelin’s cross-referential style is maintained. Soft Shoulder includes the syntax of hammered copper plates attributed to the Chicago Hull House, hardware store signage, string art, wall painting and transcriptions (in Jubelin’s hand) of a little known body of correspondence between Anais Nin and Australian writer and bookseller/publisher David Pepperell, lasting from 1968-1976. A level of attended detail, manual repetition, and inquiry will unfurl throughout Soft Shoulder, allaying Henry David Thoreau’s proverbial “women knitting toilet cushions against eternity.” 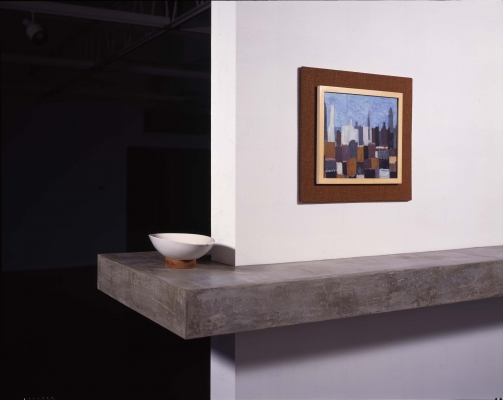