Turn of the Century Home will investigate the status of single-family home design as we approach the twenty-first century. There have been many significant developments in recent years on the concept and function of a single-family home, from affordability and security to lap pools and old age. These developments, influenced by a combination of private needs and public realities, are further shaped by technological developments (new building materials, structural techniques, lighting); a home’s location (urban, suburban or rural); and our society’s evolving definitions of what constitutes a “family” or a “home” (single parents, same-sex partners, and the home as office, gymnasium or enclave).

This latter point appears to be the most radically changed (and thus the most influential) concern in recent home design. How a family might physically and psychologically interact - either as a unit or as a number of individuals under the same roof - is of great significance in determining a new home’s floor plan, as well as the function (and definition) of its rooms.

This exhibition suggests that the concept of the home is in constant flux, with architect and client trying to reach a functional symbiosis of shared and private spaces within their house, all the while allowing for the changes brought on by the arrival of children or old age while maintaining a formal and spatial aesthetic that is pleasing to all concerned.

These concerns harken similar developments that took place in single-family home design approximately 100 years ago, in Henry Hobson Richardson’s Glessner House (1885-87), Adler and Sullivan’s Charnley House (1892), Richard E. Schmidt’s Madlener House (1902), and Frank Lloyd Wright’s Robie House (1906), to name a few. All four designs radically alter the look and function of private residences, and are widely regarded as seminal moments in residential architecture, particularly in that each house asserted the role that architecture plays in constructing the well-being of its inhabitants, particularly in terms of the body’s movement through interior light and space. Naturally, stairways, foyers, and the challenge of gathering natural light in Chicago during winter greatly informed the logic and proportions of these houses. This may be the fundamental aspect of these homes that continues in the designs of today: that the articulation of movement through the rooms and lighting of a house can be as important as the functions of the rooms themselves.

What has changed since then? What has remained? Not only in home design, but also in our bodies and our needs? Turn of the Century Home will offer a diverse range of propositions and solutions to these questions, as well as pose numerous questions of its own.

Certainly the kitchen has taken on more significance than in the past, no longer subordinate to the living room and dining room, traditionally the more formal (and social) rooms. Indeed, in many designs the kitchen has become the most social room in the entire house, moving away from its traditional role as a place for isolated (female) labor and becoming an open, well-lit hospice of shared conversations and tasks.

This development is balanced by increased client interest in personal spaces. Bathrooms, closets, and dressing rooms - the rooms where we prepare ourselves for presentation to society - have been greatly enlarged and enhanced. Home offices, studios, and personal exercise rooms are often isolated within (if not completely detached from) the main structure in order to allow for greater privacy and concentration. While many clients still request what architects euphemistically refer to as the “Great Space,” it is becoming increasingly unclear what the great space is for, unless the client frequently hosts parties or is a large-scale collector of some sort.

Obviously these are upper-middle class concerns. Most of the designs in this show are in the $250,000 and up range. This is not a point of the exhibition so much as it is a given, the minimum to be spent these days in order for significant innovations to occur. Most architects concede that just about any custom single-family home design costs a minimum of $250,000, excluding attached and “modular” housing. They also concede that a great chasm exists in single-family home design between what is being built and who can afford it. Consequently, most housing innovations are happening either at the government subsidized level or the over $250,000 plane. In the end quality, innovation, affordability, and marketability all come to bear on the realization of any project, depending on the symbiosis of the architect with his or her clients.

One aspect that is shared in all home design is the relationship between quality and affordability: the building materials and level of craftsmanship that are rational and feasible to any house. A return to more classical, domestically “symbolic” materials - oak, maple, ceramic tile, marble, brick - requires not only the added cost of these materials but the maintenance of them over time. These materials also imply clients’ desires for their homes to be materially comforting, long-lasting, and stable, a hedge against an uncertain future. More contemporary materials - glass block, steel, aluminum, concrete, drywall - lack the domestic symbolism of more traditional materials, yet afford greater design diversity and spatial liberty due to their structural characteristics and affordability.

It is perhaps best to approach the designs in this show not in terms of how much each home will cost, but in terms of the degree of innovation each architect is able to achieve within a client’s given parameters. Here the question of whether innovation is closer in spirit to an economy or an abundance of means is secondary to the specific context of each design challenge. 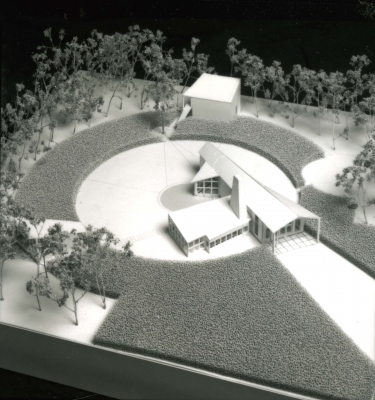 Turn of the Century Home