This series addresses the issue of gender in artistic representation, exploring the differences between cultural notions of sexuality and the portrayal of these differences. This series is a study of the cultural formation of sexuality under patriarchy. These films are presented with the belief that women are uniquely equipped to present views of their own roles in society.

February 11, 8:00 pm India Song, directed by Marguerite Duras Duras, the great French writer best known for her sensuous script for Hiroshima Mon Amour, began directing films in the mid-Sixties. Her films invariably concentrate on character and atmosphere over camera technique, and India Song is no exception. The oppressed wife of a French ambassador to India in the thirties attempts to alleviate her loneliness through a series of love affairs. The films stars Delphine Seyrig. The emphasis is on the feeling of isolation among the whole diplomatic community, focusing on the woman’s desperation in a land she hates.

February 18, 8:00 pm Committed, directed by Sheila McLaughlin and Lynn Tillmann Committed tells of Frances Farmer, a Hollywood star whose left-wing views led to her incarceration in a state mental hospital, where she was brutalized and finally lobotomized. Committed focuses on the social and political climate of America in the thirties and forties, with an emphasis on the increasing stature of psychiatry in American life. Rather than presenting Farmer as pure victim, directors McLaughlin (who also plays the lead) and Tillmann give the actress intelligence and motivation. “The complete antidote to the Hollywood version (Frances). This is impressive filmmaking.” Derek Malcolm in *Film Guardian *

March 4, 9:00 pm The Riddles of the Sphinx, directed by Laura Mulvey and Peter Wollen Typically, feminist theory defines the mother as a repressed figure, while her daughter is the self-conscious woman trying to overcome her position. Riddles was the first feminist film to deal with the mother-daughter relationship from the mother’s point of view, with the mother becoming aware of her position in culture. The directors use an avant-garde cinematic style (complete with 360 degree pans designed to discourage lingering gazes at the heroine while displaying the beauty of the visual world and the physicality of the heroine’s surroundings) to help define the theoretical and intellectual issues within the story.

March 11, 8:00 pm Empty Suitcases and Exchanges, directed by Bette Gordon The films of Bette Gordon have been described as “punk feminist exorcism” (Village Voice). Empty Suitcases is a prime example. A woman photographer, unable to decide where to live, travels between Chicago and New York. Her constant moving about exposes her to various types of politics, art, and even terrorism. The narrative style of the film is deliberately disjointed. Different actresses play the lead in different scenes, and no one seems to notice or care. Powerful sequences abound: a militant New Wave fashion show in which the models photograph themselves; an expressionless white woman lip-synching along to Billy Holliday; a scene where Gordon relates a dream, only to be drowned out by the Talking Heads singing “Psycho Killer”; and violent revenge fantasies against her (ex?) lover. “Empty Suitcases” is…very finely shot and brilliantly edited.” (Artforum) 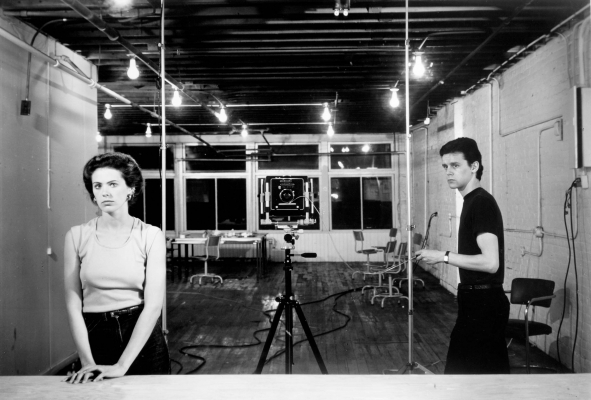